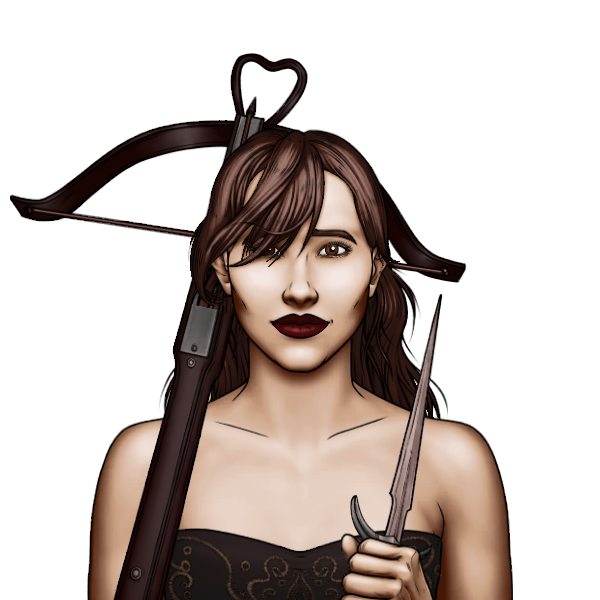 Born on a battlefield from a prior union between her camp follower mother and a soldier. Not the soldier her lovesick mother originally followed. He died early on. Just a random soldier, because her mother stayed on following the army, having nowhere else to go. Her childhood was spent observing what went on in the camp follower tents, and observing what goes on with an army in between battles. From her mother and her ilk, Stria learned what to do to and with a man. From the soldiers who treated her as a pet, she learned to knife fight and some dirty hand to hand skills in case a man tried to get rough with her.

Even though surrounded by soldiers, even female ones, Stria had no desire to become one. Why risk death every few days for shit pay? From some of the camp followers, she heard about brothels in the cities, where women did nothing more strenuous than entertain clients in comfort, with daily baths, clean clothes, and steady meals. She watched, she listened, and when old enough, practiced on a few younger soldiers. When the army made its way towards the capital, she bid goodbye to her mother, and made her way through the gates.

It was a whole other world in the city. She had some scuffles, but stayed mostly unscathed. She scoped out the brothels, talking to he girls outside advertising the wares, but mostly crouched in shadows listening to the girls talk to each other. Once she had an dea of which establishments were run well, and what schemes to avoid, she auditioned at a few herself. Back then, she had a just pretty face, on top of a body that was enough to stir any straight male. She got in a middle class brothel and worked her way into a high class one.

She was a little away from having enough money saved to buy her way out and set up her own brothel, when a drunk nobleman slashed her face, using her as a substitute for the rival he couldn’t touch. The Madame, seeing the opportunity to dispose of a potential rival herself, provided only a nonmagical healer while Stria lay in and out of consciousness, ensuring her face healed horribly scarred. By the time she recovered, no magic could cure her, and she would never work again. Bitter, she used the money she had left from paying for her healing to buy into the Thieve’s Guild and trained as an assassin. With an outfit and her makeup, she could become anyone. She specialized in using her body to seduce her targets, then killing them once they were vulnerable in a bedroom. Her attacker was her first hit. She killed him with a knife under the chin into his brain while he sprawled on the bed, expecting a bored widow he just met in a ballroom to do something naughty to him.

Stria joins the party after her last hit, when the target’s murder caused more heat than expected, and she needed to stay away from that city for a while and lie low. It unfortunately meant she had to bail before getting paid. Since her childhood was a nomadic camp existence, she is familiar with all aspects of camp, and can help out as needed. Handy with daggers, she can sneak and take down unsuspecting people. She tends to hide her face, since one look at her face scares children or sours the eagerness of anyone who saw her body first. Practical, no nonsense, acerbic, and tends to keep to herself unless in disguise and on a job.