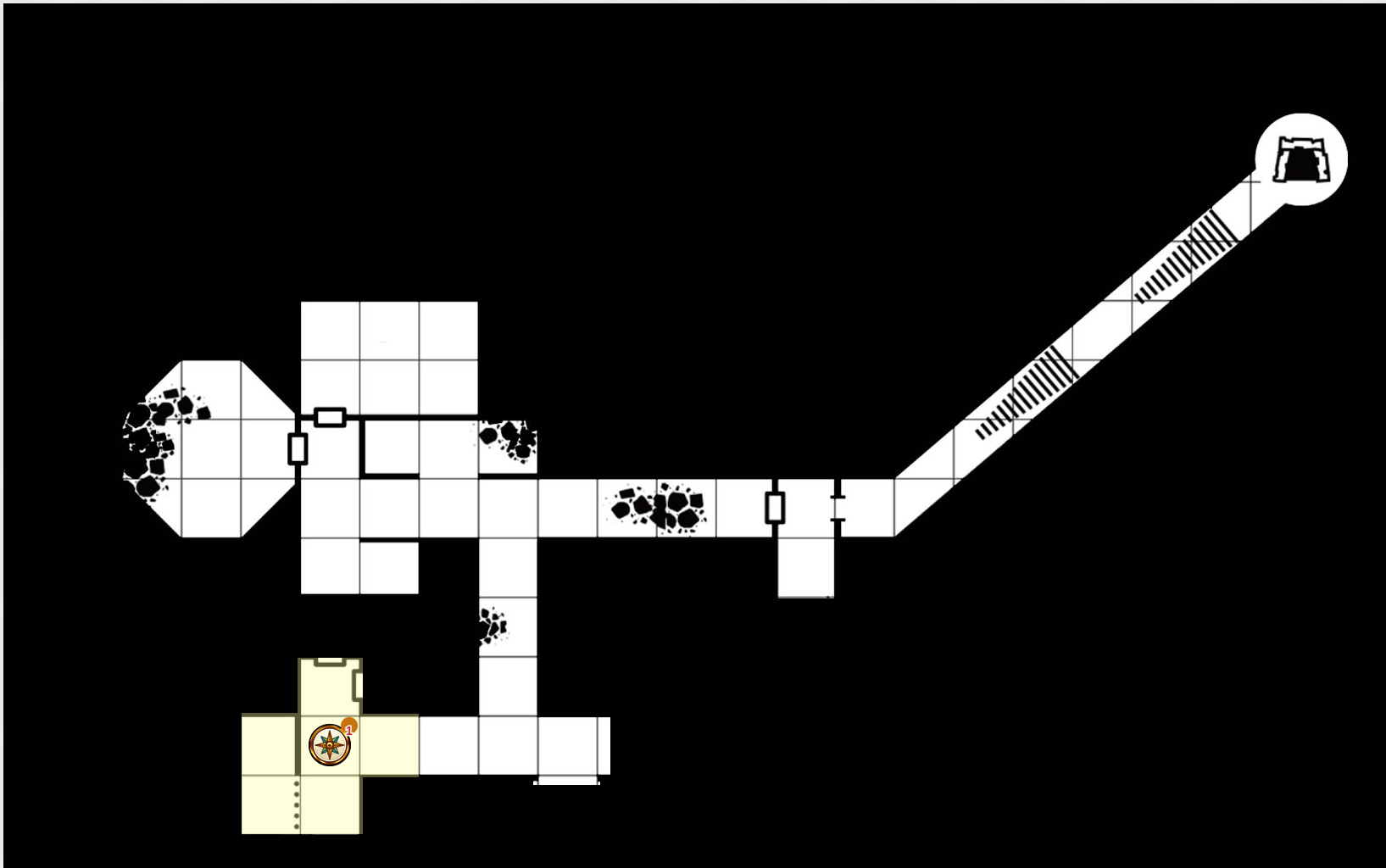 We left Bayonetta’s body at our campsite. We weren’t ready to return and there would be no point carrying it with us. A simple cairn of stones would do for now. u-Heury collected her possessions (and wages).. we will see what he does with them.

Further south and west we found a cavern floored with obsidian. It was slippery. Very odd, obsidian is normally shiny but not slippery.

Southeast we found a large cavern with a small population of stirges. We were ready for them. Ooohya distracted two of them with some sort of magical glowing things. Two came for me, I shot one dead in one shot, but the other latched on. I dropped my bow and killed it with my bare hands, drew my sword and killed another. Gurg and u-Heury each handled one. We mopped up the two chasing the wisps quickly after that, Oooohya using some sort of trick with his lights to throw more accurately, and took a brief rest to bandage our wounds.

Further south, somewhat in between the previous two paths, we found a cavern with a small cliff face. u-Heury scaled it easily and lowered a rope for the rest of us. Up above we found the body of a wizard, so proven by the large book of magic in his backpack. He had died from a wound in his side, and was missing a dagger, the sheath for which still sat empty on his belt. Ooohya took the book of magic, which will hopefully be of use to him. Unfortunately it seems unlikely to lead to a payday for the rest of us.

We built a cairn for his body as well.

Moving further south within the same cavern, we cane across a narrow bridge over water, guarded by… What else? A troll. Surprisingly he was willing to negotiate and sick of eating fish. We offered him freshly killed stirges as a snack, which almost worked, except u-Heury thought stuffing them with magic mushrooms might be appropriate. Clearly the troll disagreed; we heard some kind of explosion in the darkness, followed by the sounds of a furious troll with indigestion. We ran, without shame. We won’t be coming back there for a while.

Since we had fully explored that cave (except for whatever was past the troll) we named it the troll cave and moved on. This time we took a closer look at the entrances and chose one that looked like it had been made by civilized folk. We figured that would have a better chance of finding actual relics.

The entrance we chose led to a series of twisted passages, all alike… Don’t ask me for detailed directions is what I’m saying. We didn’t find much at first, just empty rooms, until I felt something suspicious on the handle of a door. We opened that one using u-Heury’s spear from as far away as possible. And a good thing we did, as a crossbow was rigged to fire through the door when it opened. Luckily our precautions were enough and it missed. We collected the crossbow and moved on. It was a recent trap, so someone or something else is in these runes with us. Perhaps not right now, but often enough to defend their territory.

A little south of that trapped door we found a porticullis. On the far side were many dried bones. Poking them with a spear did not cause then to animate, at least not when we were on the safe side of the gate.

We took a brief pause here for me to record this, and will continue shortly.