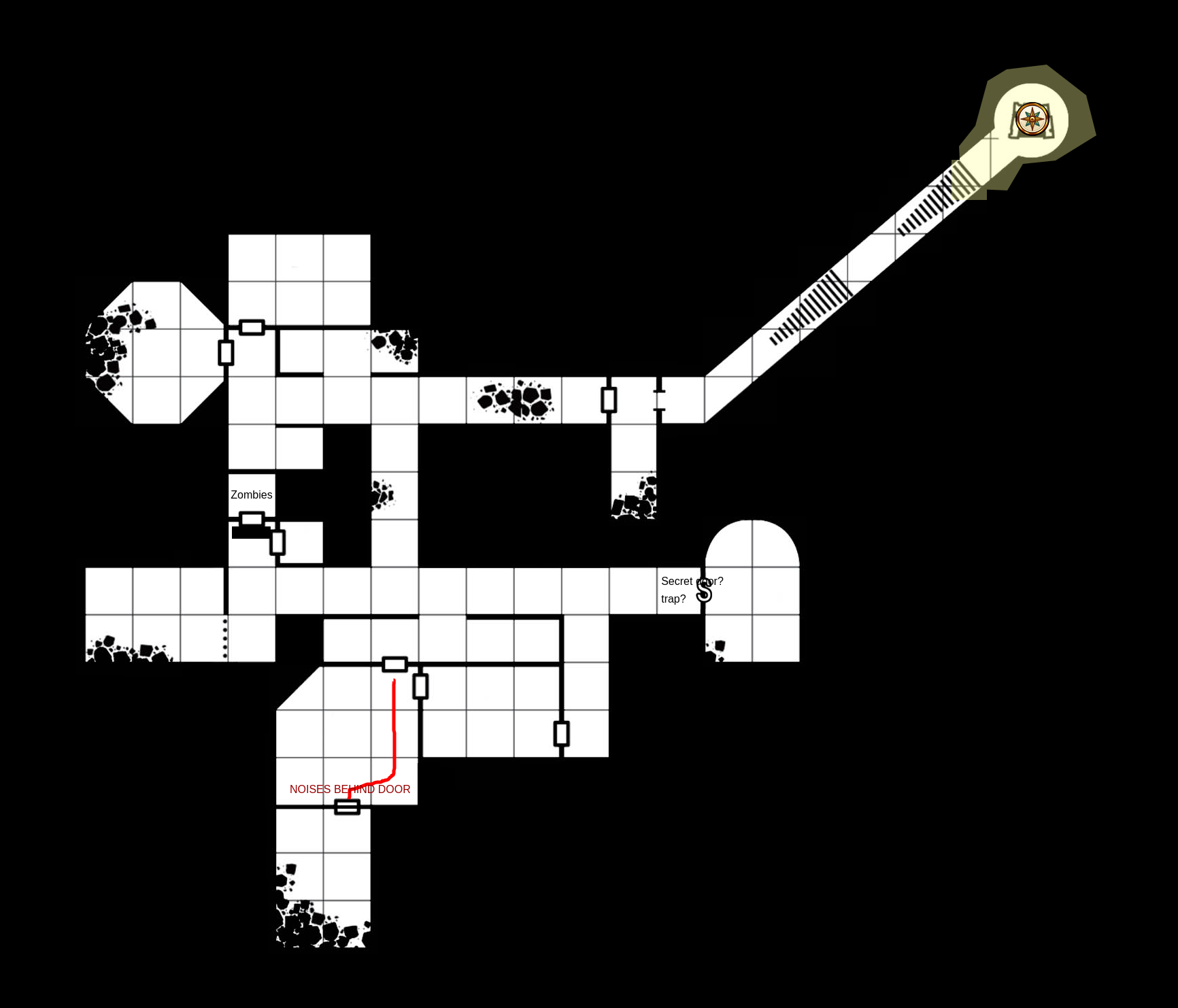 North of the portcullis were two doors, both closed. We listened and they were both silent as well. Opening the one to the north revealed a closet full of skeletons; someone’s family has a lot of dark secrets. Well, actually zombies. But I couldn’t resist the turn of phrase. There were about 6 of them but they didn’t move when we opened the door. Huh.

Oooohya worked up his courage, threw a torch at one, and we slammed the door and took off. The things started moving then! But they didn’t know how to open the door, so we were safe for the moment. After a few minutes we returned, ignoring the zombies scratching, and opened the other door.

The second door to the east was empty of life or unlife. It did have a desk, which Ahnjela searched hastily. She found nothing until we had the bright idea to drag it into the corridor and use it to block off the zombie door so we could search it in a more leisurely fashion. That led to a papyrus scroll, which we stuffed in a loot bag. “This belongs in a museum,” said no treasure hunter ever, unless that museum was the highest bidder.

From there we went south. We found a larger room with tracks in the dust. A side room had clearly been ransacked already, but there were noises and tracks further south. u-Heury ate a mushroom while we searched the ransacked room just in case, and suddenly started to glow purple.

We followed the tracks south through a doorway, and burst in on a tiny tribe of kobolds. With the advantage of surprise, I shot and killed one, which terrified the rest into surrender. They also begged for food, being outcast from a nearby larger tribe. We fed them in return for their help.

After further exploration led to a dead end, we returned to the skeleton porticullis. With all of us, plus Gurg and a kobold, we were able to lift the gate. The remaining kobolds collected enough rocks and debris to hold the gate up temporarily, so we made our way in and looked around. u-Heury is an odd fellow; he spent half an hour collecting skulls and moving them far away from the rest of their skeletons. But then he saw a silver goblet and grabbed it. Suddenly the skeletons he hadn’t gotten to yet came back to life, animated with unholy force.

I totally saw it coming. I grew up in Helix, the town practically next door to the Barrowmaze. Undead are nothing new to me. I had my bow ready, ducked back out of the room, and fired. A miss, but skeletons don’t make easy targets. Too much empty space between the ribs. u-Heury escaped with the goblet clutched in his hands, and the rest made it out with only minor scrapes. The kobolds had fled, but the goblet was our first obviously valuable relic.

With zombies eager to come out of the closet to the north and skeletons to the West, we were almost ready to take our prizes and return to town. We did one last check at a dead end, and found a secret door that opened from a lever in the floor. Inside was an oddly shaped room, with bookshelves and a strangely shaped skull. u-Heury took down the skull, popped it into a sack, tied the sack with wire, and dumped the whole package to the bottom of his backpack. After what happened in the porticullis room, I had nothing to say. The man has good sense.

We found a strange leather scroll on the shelves that remained intact, too. It should be worth good coin.

With no other exits we were ready to go. On the way out we met a kobold – the only one who hadn’t fled. I took him as a pet and named him Tartuccio, after a famous kobold in a Bard’s song. He accompanied us outside, where we realized it was already dusk. We returned to the room behind the secret door to spend the night, which passed uneventfully.

In the morning, we recovered Bayonetta’s body and gave it a decent burial before beginning the long trek up the path to Eastdale.

Again we find ourselves plunged in darkness as we search the ruins of Archaia. I’m becoming used to the smell of burning tar from the torch. These days I find myself holding this light more often for the group. I’m not fond of this responsibility as it typically means I’m the first one that the creatures of the crypt focus in on, but I figure at least it helps me control when the group flees and when the group stays.

Archia itself is a large canyon dotted with crypt entrances from a more ancient time. Some of these areas are silent, but as we’re discovering, most are crawling with new inhabitants. 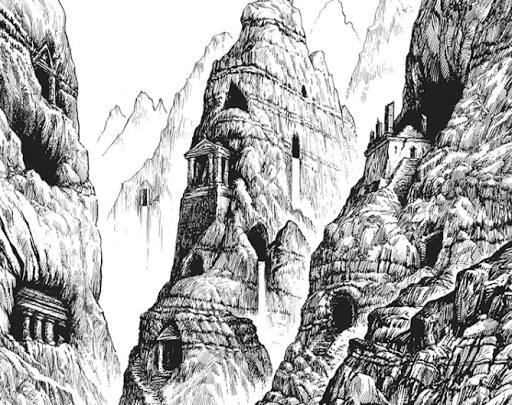 Earlier we spent a strange, yet adventurous morning in one of these Caves of Archia. We fought off blood-sucking stirges, rummaged through a mushroom patch (where incidentally I found a beautiful spell book off of a poor unfortunate mage’s decaying body) and ran away from an angry troll who we taunted into charging at us. Obviously I was the first to run . . . that thing was twice our size and none to happy with the stirge wrapped magic mushroom we threw to him! Luckily we outran the ugly beast, and he lost interest as we ducked into the sunlight.

This brings us to this evening’s adventures. We decided to explore another crypt entrance that was a bit less natural looking. Indeed the entrance led down deep below the mountain, two flights of stairs, into a questionable crypt that is destined to collapse in on itself over time. The mountain keeps rumbling and it is surely a bad omen.

The northern half of the crypt was mostly barren, but as to be expected, someone or “some things” had been here before us. Come to find out, a small band of Kobolds had been roaming the halls and tried to set a crossbow trap in one of the rooms. It didn’t work. Eventually we found them lost in the southern most part of the dungeon and our fighter slayed one without hesitation, which led to their surrender, and eventually their help! As it turns out, kobolds will do just about anything for food, including lifting a heavy portcullis and fetching rocks to hold it open. 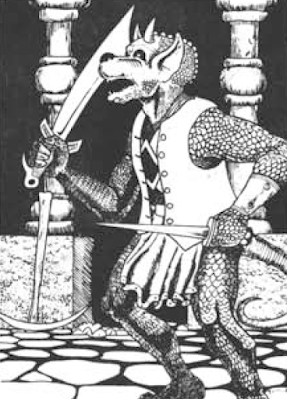 I must make a side note here about the kobolds. Their presence makes me nervous. Most of them fled, but one has joined our adventures. Our fighter named him “Tartuccio,” supposedly after a bard song about a kobold (incidentally, what a horrible kobold name! Leave it to a bard to come up with something completely unrealistic. He looks more like a “Gurk” or “Zok” to me. I think I’ll call him “shoe’y” for short). Shoe’y spoke of a winged beast that was mighty and could make the kobolds powerful. I think I heard tale once that where you find kobolds, you will also find dragons.

The western part of the dungeon was full of old death. Beyond the portcullis was a pile of old bones that, despite our attempts at separating the skulls, immediately animated when our barbarian grabbed an ancient, silver goblet from a skeletal grasp. The group again made the smart choice and knocked out the portcullis supports while the skeletons were reanimating and trapped them back in their tomb. (This also was the point where most of the kobolds fled in panic.)

Also in the west we found a room full of motionless zombies of all humanoid races. Sure enough they also animated the moment I threw a torch at one of them and hastily shut the door on them. One thing about the undead: they’re none-to-bright and don’t know how to use door handles. Fortuned favored us again as a room next door to the zombies had a large desk that our unusually strong thief was able to pull in front of their door to block them. Also fortunate, I managed to dig up an ancient tube of Papyrus from a hidden drawer! It’s not of magical nature, but I bet you either Murrion the Magician or Retep back in town will pay us at least 250 gold for this artifact.

As I write this note, the last of our evening’s torchlight is about to fade. I discovered a secret room here on the Eastern side of the crypt and it will provide perfect shelter. I doubt kobolds or undead will be able to figure out the hidden lever system that was used to disguise the door. We’re safe here, and I’m on first watch as our warriors take a long night’s rest to heal from their battle wounds.

In the morning I’ll be using Read Magic to take a closer look at this spell book we found in the Troll Cave. Perhaps something in its pages will spark inspiration in me to write a spell of my own! I’ve been having visions of a human that looks something like a pitcher of red liquid with arms and legs, splashing through enemies and making them glow! Of course, to craft such a spell would take intense research and approximately 100 platinum to devise. Maybe someday my fame and fortune will grow, but for now . . . I’ll hold the torch and let my vestments do the smiling.