I came to Eastdale looking for guide work, leading people through the wilderness. Don’t really like people much. Animals are much simpler, I know where I stand out in the wilds. Difference between a dog and a wolf and a cat you can see and smell and taste. Humans, well, some of us will lie to ya and cheat ya and kill ya and we all look the same. But sometimes ya need stuff only humans can really do. Talk, even if it’s just listening in a corner at a bar. Metal tools. Alcohol. Can’t do everything yourself and then you have to do something else to pay for it.

Anyways I heard this group talking. They found a map. Oom of the snake, something like that. Wanted to go explore. Said I would take em there and back for a share of what they found. They hired on a few other folks. Not my favorite thing but the wilds will eat the unworthy (and sometimes the worthy). More swords help even if I wish some of them would just SHUT UP – Les the Lesser, nature chick, looking at you. Come to think about it she doesn’t even have a sword. Oh well. Maybe she’ll get eaten first. Works out that way. That’s the law of nature: eat or be eaten.

We set out following the road. One of the clients was holding us all up by wearing plate. Lesser Les asked me to find a mule, so I did. Didn’t know she was going to steal it. Didn’t really care, come to think of it. It’ll be a shorter life but a more exciting one. Mebbe not so much fun carrying Sam and his mail on your back, but who wants to live on a farm?

This oom thing, two, three days away by road now that we’re making better time. We stopped for the first night at a camp with a spring I’ve used before. Good source of water, and I fed the new hires from berries and nuts I know. I shared a watch with Les. She just natters on. Probably thinks I’m listening. Truth is, anything approaching the camp will hear her first and miss me.

We had a group of men approach the camp overnight, hoping to refresh their water supply and trade. We ain’t got no claim on nature’s bounty. They told us a little of the lands beyond in trade for the goodwill. Snakes, poison, cursed, don’t go. The usual. But it turns out they have some remedies for the poisonous animals near the place where we’re going. They just last for a few days, but they may save a life. Maybe even mine.

I negotiated a trade. I had picked up some caltrops in town; nasty little things, ruin a horse’s hoof if it steps on one. They already said they hated pricks on horseback. So I traded my caltrops for their remedies. No money needed, just the way it should be.

They wanted Perbo the halfling for “entertainment”. He’s not that funny. I asked if he wanted to go. Said it would be good for him. He wasn’t buying it. I wouldn’t either if I were him. Runt of the litter never does well. Good thing they settled for the caltrops. I understand that dwarf tossing is still a thing in the northern tribes, and I don’t think they can tell the difference.

Stria was quiet through the whole thing. What on earth is an ordinary peasant woman doing out in the wilds like this? Maybe she has hidden qualities. Maybe she is just tired of life and wants a quick death. Guess we’ll see. Certainly doesn’t draw attention to herself. Got something in common there.

The next day we left the road and I was back in my element. Camped near water again. I took another watch with Les the Less-Silent. This time we were joined by Landon, an elf with a lembas problem. Can’t stop talking about it. Didn’t have the heart to tell him that stuff’s just biscuits and sugar. Coulda baked some up if we had a campfire. Not cause I care; just to show him I know how to make his elf stuff.

But before I could get to cooking he spotted some orcs with his elf vision. That shit’s cheating. They were mostly bypassing our camp, fleeing from something, but a few of them caught sight of Landon’s pointed ears and decided to go for fast food. I slipped off into the night while the elf ran screaming for the camp.

The druid did something useful and lit up the front orc. That one died quickly as did the one behind it. The last one was heading for Slim, our muleman. I came out of nowhere swinging like a berserker to distract it, and neat as a trick Landon’s halberd poked right through his forehead from behind. Red in tooth, claw, and polearm.

Perbo got a short bow instead of coin. Another victory for barter. They had two more short bows and three scimitars. We picked them up – one orc’s trash is another man’s treasure – and went on.

Finally we made it to the oom. Parked the mule just a little inside and followed the map deeper in, past some smashed statues. I took note; u-Heury had been here. The man has a reputation for demolition even I have heard of.

We ended up in a room filled with doors, and some kind of stinking pit in the center. Les talked to nature a lot. Apparently nature talked back and told her what doors are safe. That’s new. Or maybe I slipped her some of the wrong mushrooms last night on a lark. She did seem surprised when her voices kept talking to her after they usually stopped.

One of the doors had some kind of trap or danger behind it. Another one buzzed. Not very helpful. We carefully checked them all and Landon started opening the safe ones, checking with his infravision. He found some sort of masonry tools in one. Maybe I can pick up a few in case I want a couple rough shelters that last longer than a season.

When Les comes down off the ‘shrooms I fed her we’ll search some of these rooms more closely.

Our journey began and everyone introduced themselves to the group. I believe we had an assassin, a fighter, a halfling, a ranger, and myself? To be honest, I was a bit distracted with last minute preparations for the road to sufficiently give my full attention. I probably spent too much money on a tent, and I definitely spent too much on the local hirelings. We’re bringing along a torchbearer and two more fighters who are willing to trade their lives for gold.

We started our journey and if I could roll my eyes more at the fighter hobbling along in plate mail, I would. Knowing we were headed to a snake temple, I was hoping that I could charm a giant snake into being a friend, but instead I asked the ranger to track us down a mule. No way was I going to let this journey take us 8 days to get to our destination because of old iron legs over there.

The ranger did his job very well and quickly found a mule; although, I think if he had his way he would have eaten the poor beast. I used my patented animal calming technique and began casting Animal Friendship, asking Silvanus to allow us to take this creature along with us. Silvanus blessed my request and soon the Fighter had his worthy mount, which the group quickly named Burrito. It must be some strange local word that I don’t quite grasp yet. 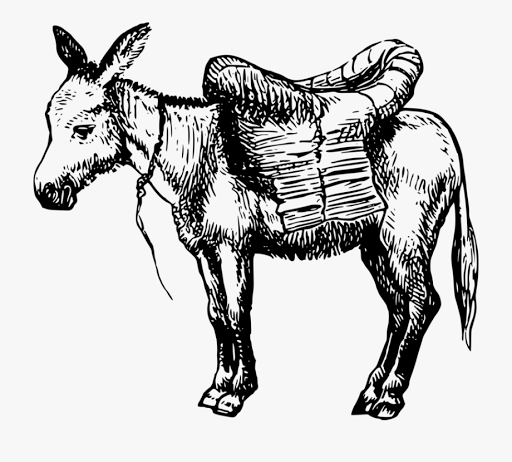 We had to hurry a bit after finding Burrito when a local farmer started chasing after us yelling something or another about the mule. How silly. One can’t just own Burrito. Burrito is following his heart, and he is obviously in love with me and can’t take his eyes off me, so…

At the end of a long day of journey, which involved some unfortunate rain, we set up camp and found a fresh water source. Night fell and I went promptly to sleep. Early in the morning, we were woken up by a roving band of Barbarians. I was incredibly excited! I tried to convince them to take me along to party with them, but they didn’t seem interested in me as much as they were the halfling. The halfling gave us all the slip and well that was it for talks about partying with Barbarians. The ranger traded some caltrops with them in exchange for information about the Tomb of the Serpent and a few mud packs for removing snake poison. I took down the ingredients, but they didn’t give me the recipe. Barbarians are great for partying, but horrible at giving useful information.

On the second day we trekked off the beaten path and made it into the northern hills. Everything seemed uneventful until, again, in the early morning, orcs happened. There was a war pack of them, fortunately most moved on, but three of the more foul orcs rushed our camp. I lit one up with a green Faerie Fire glow and gave another a glancing spear blow, and the party responded with surprisingly quick action. So much so, I think we may be more suited to cleansing the world of orcs than delving deep into snake tombs. 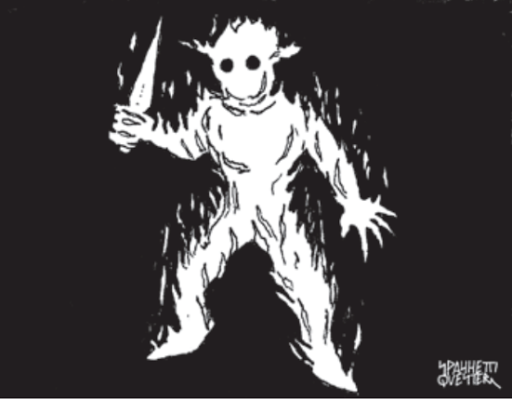 On the third day we made it through the mountains and arrived at the tomb of the serpent, only pausing slightly to sit out what appeared to be an illusionary storm. A company from our guild, The Butchers of Helix, had already ventured into the lower level of the Tomb of the Serpent, so we were fully briefed on the dangers inside . . . to a point. Inside, we stashed Burrito in an empty room and eventually made it to the lower levels and an octagonal room with six doors. The previous company found a magic ring in this room and fought off a cadre of magical animated zombie hands, but this was also the point they called off their journey and headed back to town.

It was time for me to call upon Silvanus again and cast Detect Danger, which allowed me to use half an hour to fully detail the aspects of three of the six doorways. The first door looked primitive, but Silvanus scented the area with cinnamon to indicate its safety. The second door looked ornate and pictured snakes descending on humans, and this door also was scented with cinnamon. The third door was common looking, and also was scented with cinnamon. Then a miracle happened! Silvanus was pleased with our adventure, and I felt refreshed to the point that I could once again cast Detect Danger and finish inspecting the other three doors! As fate would have it, the fourth door smelled of skunk and a sign of potential danger was given to me by Silvanus. The other two doors, however, all smelled of cinnamon.

While I was busy with my spells, my companions were all either standing guard or inspecting the other doors. One of our companions even began opening the doors that smelled of cinnamon. One opened to an unfinished hallway. One opened to a simple room. One opened to a hallway that led to a room. All entries seemed safe as foretold by Silvanus.

Possibly the most interesting door is one that looked common, smelled of cinnamon, yet behind it was a slow heavy thud sound that repeated every 10 minutes or so. My companions heard it as well. What dread lurks in this place . . . I fear we will soon find out.