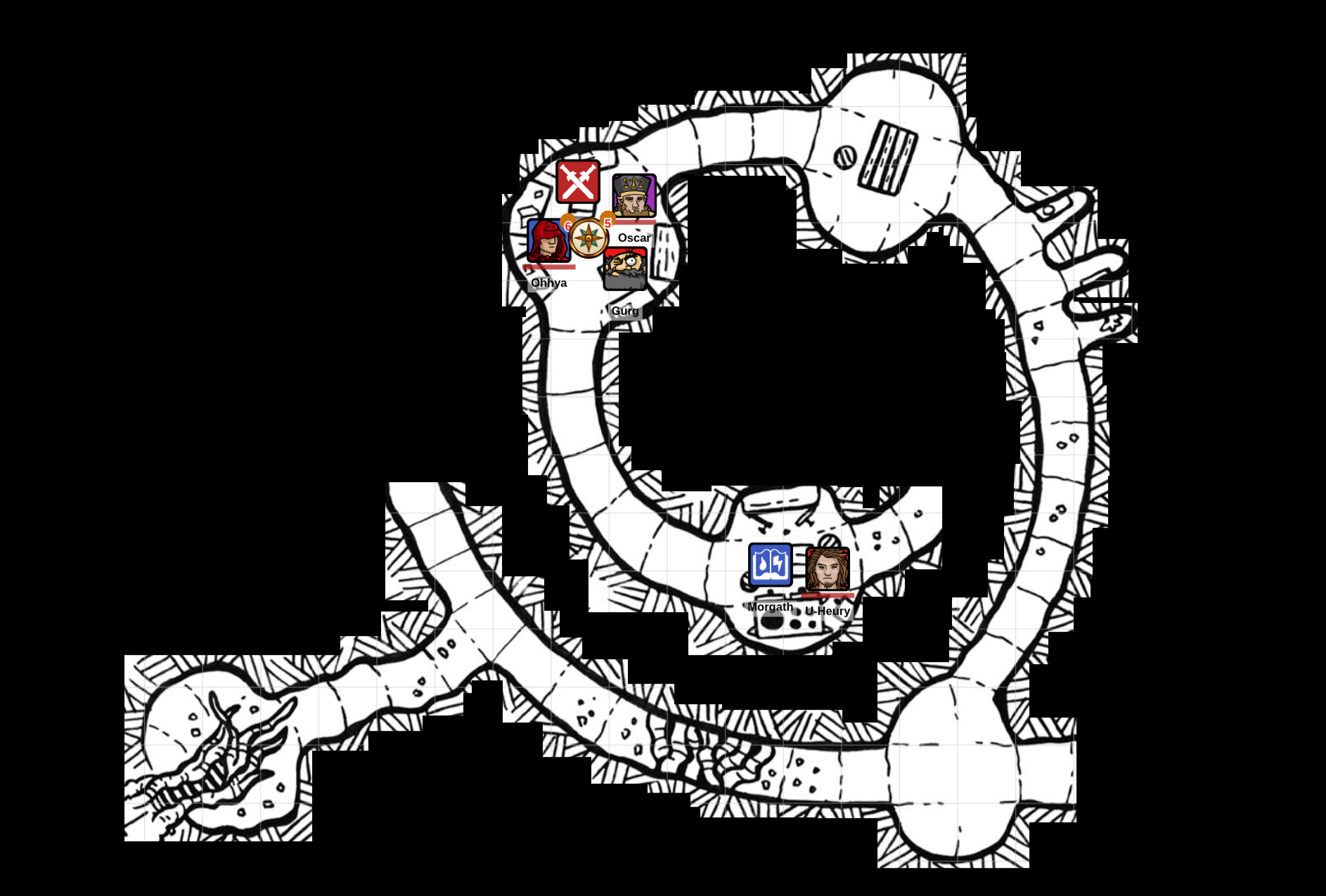 After my brief foray into the world of the adventurer, the rest of the year seemed to just fly by. I had much to learn from the near death experience at the fangs of a two-headed snake, and indeed spent many days and nights in contemplation, filing form after form with the goddess Denara seeking a boon of her wisdom. Eventually I received her insight; I must work on a series of stretching exercises every day, to improve the flexibility and strength of my lame leg; it will likely always be a weakness, but even a little improvement could save my life. I was diligent and meticulous, every day filing form 47a (“Report of Daily Exercise For Physical Therapy”). The goddess approved, and blessed me with improved range of motion by 15 degrees in the knee and ankle. I shall be better able to duck in the future. Praise be to the lady of letters!

I was so inspired by this success that I took my efforts to the market in Eastdale! I set up a stall and had a sign made up: “The Cleric is In!”. I charged a carefully calculated fee (for the goddess spoke of price discrimination, saying “from each according to their ability to pay, that profit may fill the area under the supply and demand curve most efficiently”) and offered the wisdom of Denara to all who sought it. My efforts were quite successful, to the point that the worthies of St Ygg nearly drove me from the marketplace in a fit of jealous rage!

Before then I was able to help one man in particular, a mercenary named Feverborne. He sought to improve his health, and so I prescribed an apple a day (and a form to report the results of course). He was quite pleased and donated 20 gp to my efforts.

After St Ygg brought that enterprise to an end, I turned my efforts towards research, seeking a location where I could found a temple to serve the merchants and bankers and bureaucrats of the region. I received an answer eventually in the form of an omen, which I analyzed according to the rules (worksheet 56f, animal sacrifice, conducted at dawn, extraction of entrails, meaning thereof, from rooster, loud and obnoxious, conducted in haste). I compensated the farmer 2 gp for his contribution to my communion with the goddess and fined him 1gp for disturbing my peace of mind while filling out forms. He was confused but grateful, as were my fellow travelers at the inn.

The direction I received would take me out of town and towards the Dolemwood, so when a chance meeting with my old companion Ooohya brought up that same location as the place to return his strange amphibian friend, I considered it mark of divine guidance and immediately agreed. We hired several guards, for travel is dangerous, including a dwarf named Gurg who came highly recommended from Feverborne the mercenary and a man named Davos who swears to port and starboard that he’s never been near a ship nor knows a thing about onions. Odd. And a man named Pelisus, who claimed to be a fortune teller and died the first night out.

Speaking of that first night, to control travel costs we hired on as caravan guards for most of the trip through the Gauntlet. The first night out we camped at a tree in the woods. I tried to warn the caravan masters that the tree was reputed to have strange and arcane events surrounding it, but they refused to listen.

We paid the price for their lack of faith later. Or I should say I paid it for them…

I took first watch, and we were attacked by wild dogs towards the end of that watch. We drove them off, though Pelisus lost his life and I took a serious wound. After checking to see if I could do anything to help Pelisus (I could not), I healed my own wounds with the grace of Denara and the application of a Form 23-1-b (“Application for Cure Light Wounds, Self”). We filed Form 13 (“Field burial for those not of the proper faith”) and Form 2b (“Temporary requisition of property from deceased for return to next of kin”) for Pelisus.

Closer examination of the tree in light of the wild dog attack revealed an entrance into some sort of hollow below. We descended, figuring it was better to face the threat now than be surprised again later. The passage opened a small room with two exits, along with a small carving labeling the hollow “Nolly’s Kingdom”; we turned right,which let us to a strange root system. When u-Heury and I passed through,the roots animated and stole my Holy Scales! How can I possibly continue my services to Denara without her blessed measurements and balance? They also took u-Heury’s spear, which I suppose is fair, he seems to worship that more than anything else.

We spent an hour attacking the roots with axe, sword, torch, and finally shovels, but to no avail. The items were gone and the roots themselves were clearly no longer animated. We would need to proceed deeper into the hollow beneath the tree; perhaps some creature within would have the items that had been taken. We resolved to proceed, and that’s when things went weird…

The next hollow split into two passages. The one continuing east had a strange chill breeze. The one to the north seemed normal. With no other distinguishing factors, I chose north, believing that heading towards the center of the tree would be best.

We encountered a strange hollow, filled with carved wooden faces? They were animated, proclaiming something about questions answered for payments given. Feeling somewhat desperate, I demanded the return of my holy symbol and offered a platinum piece. They muttered something about the sheep-head’s treasure being guarded in a room filled with horrors. Sheep-head????!

The others asked silly pointless questions without comparable worth (as demonstrated by the payment they offered). Nonetheless I transcribe the results here in case they have meaning:

“A silver sword lies hidden in a pillar of stone”

“Reptile worshippers dwelt here long ago. They entombed a great enemy, guarded by his queens.”

“Do not meddle with the hunter. His presence still haunts these caverns.”

We continued onward towards the center of the tree. We came to a series of small hollows in the side of the passage, almost like closets. The first had cloaks and strange little hats! I announced that I was going to search for my holy symbol in the cloaks, and did so. I turned up a small key on one of the cloaks, but returned it as it was not what I sought, and moved on. I think I noticed one of the people behind me putting that cloak on, but I am not responsible for the sins of others; I did the right thing myself.

The next alcove held a picture of a strange little man, perhaps a dwarf or a gnome. I passed on. Again I noticed one of my companions taking the picture down from the wall behind me. I frowned, but if there was no one here and this place was abandoned…

The next hollow was larger. It held a table and chair. I stopped and announced myself: “I am Oscar Blaine, devotee of Denara, seeking redress for the theft of valuable items from my person!”

I was answered by a sheep-headed humanoid creature with hooves and horns offering me tea. He named himself as Rammeus.

I made inquiries about my missing holy symbol. The creature disavowed any knowledge of the theft but suggested proceeding east where others also resided beneath the tree. I was ready to proceed, but the rest of the group wished to take him up on the offer of tea and explore the rest of the quaint little nook. Two other sheep creatures (he called them his “flock”) lived within, complete with a kitchen and bedroom. The portrait was of a friend of his, as he explained when he noticed one of my companions carrying it.

Despite the somewhat rude explorations of my companions – a less biased man might call them searches! – we remained on peaceful terms with the sheep-folk. We did not find my holy symbol or u-Heury’s spear. Rammeus is offering tea, which I suppose we can accept in the name of hospitality before resuming our search to the east.