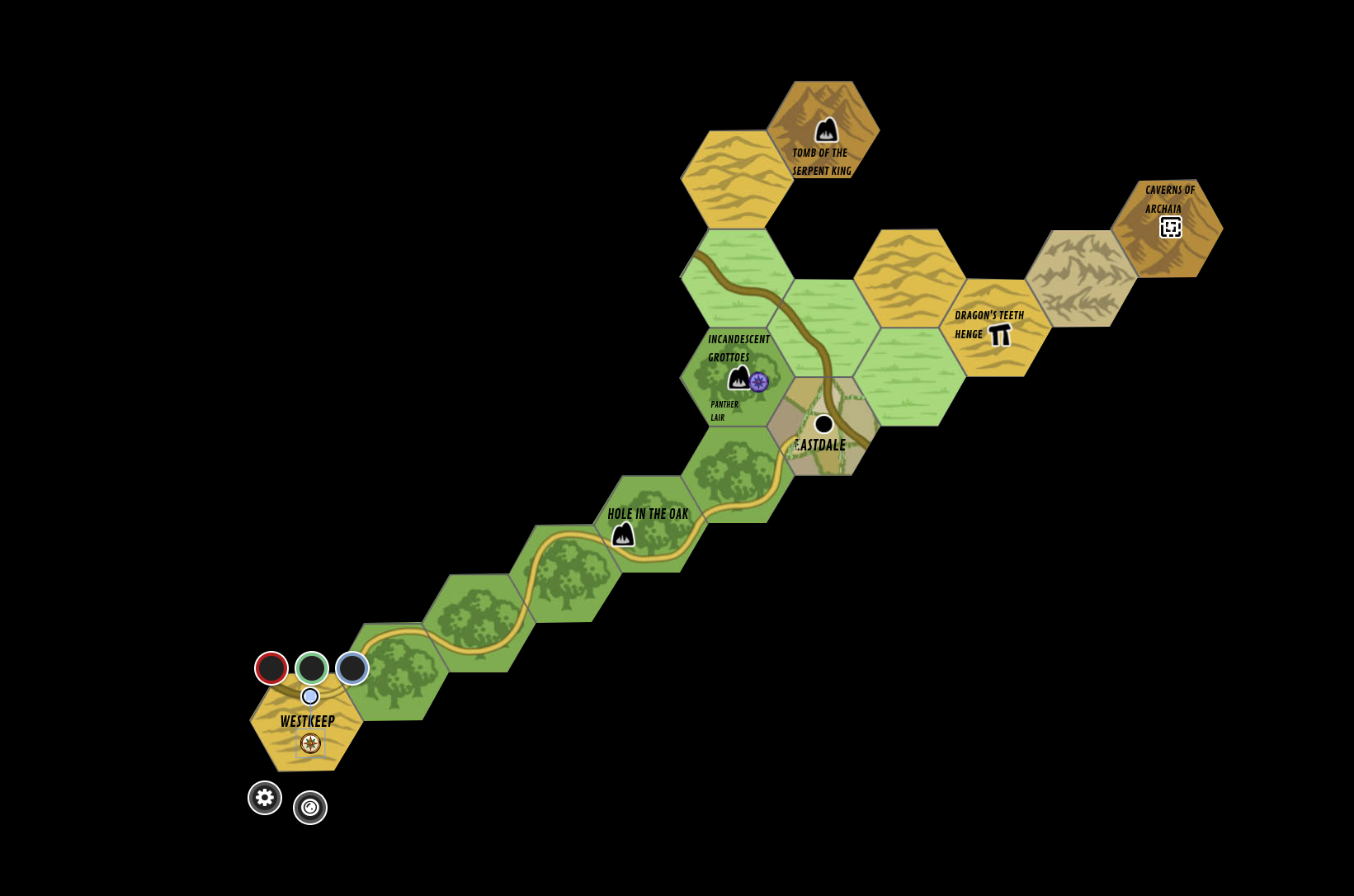 Ygnas: I was travelling through the woods on a mission for Zuul. I don’t remember what happened after that. I woke up with a splitting headache, tied up in what looked like the inside of a tree, but smelled like a barnyard. There were … things… that looked like an unnatural cross between sheep and men. They had a bunch of other people there. They killed and ate them. It was horrible. I was the only one left, and I consigned my soul to Zuul. I think I passed out again. The next time I woke up, there were people there and they untied me. They looked like mercenaries. One of them was a cleric, but didn’t have his holy symbol displayed. All the creatures were dead or gone. I was never so happy to see anyone in my life. I joined them, since I had no idea where I was or how to get out, and being with other people seemed like a good idea for a while. We passed a creepy room with faces in the roots. I lit that room on fire with my torch. The flames are so pretty dancing, and I can hear Zuul in the sound of the fire. Someone rudely pulled me away from my contemplation, and I continued on with the group. I hoped the fire would spread, since the whole place was wood. At a circular room with a big red rug in the middle, a white haired man in wizard robes announced some garbled message about staying somewhere provided for our safety, then he vanished. One of the group lifted the rug up with a spear, and there were magic runes on the floor. He stepped on the rug over the runes, and vanished just like the wizard. The other cleric and I discussed how to get the rug up and take it with us to sell. The other guy came running back from behind us. Then he stepped on the rug again as he was saying it was fine. He came running back again, saying this time he had been transported to a room a little further from the last one, and attacked by bats. Our explorations had revealed another room with a statue of a huntsman and two hounds with big mirrors on either side. I said how it would be fun to smash the mirrors, and the guy who kept stepping on the rugs was going to throw rocks at them, but the assassin stepped into the room between the statue and one of the mirrors. Then the statue disappeared, and we heard a horn and hounds baying. The assassin smashed the mirrors, to the dismay of the other cleric, who wanted to bring those out to sell as well. He worships a weird god. Some of the group didn’t look too good, so they decided to leave then, fearing the statue was coming for us. We went outside. There was a caravan out there, and they were all nervous about the fire I set, so they moved camp. Unfortunately, the fire didn’t spread, and there wasn’t a beautiful bonfire, much less a forest fire. That would have pleased Zuul. I’ll do a better job when we go back. I’m assured we will go back. The caravan pushed all through the next day and into the night to reach town. I think I saw a dam in the darkness, though, and I have to go check. Blasphemy. The water must flow free. I will destroy it in Zuul’s name…

It seems the young u-Heury was not the only captive of the humanoid sheep. A muffled banging and crashing led us to open the wardrobe, inside of which – tied and bound no less – was a blonde haired, blue eyed woman. Once I got her free (after filling out form 69-d4, freeing victim of bondage, nonconsensual) she introduced herself as Ygnas, a priestess of Zuul. Interesting…

We allowed her to join the caravan because leaving anyone to the mercy of the sheep creatures seemed like a bad idea.

It was late and we were all tired and wounded after the fight. Ahnjela was in bad shape, and I was only a little better. We negotiated, and she agreed to engage in an act of Holy Commerce in return for healing, paying gold on a sliding scale depending on how much the Goddess was willing to heal her. And indeed Denara blessed her wounds, reducing them to mere paper cuts! I determined on the spot that I would perform all future healing services in this manner. (Excepting only those performed on my own person, for self dealing in such a manner is frowned upon).

Sadly, I had to give up the holy symbol for lost, at least temporarily. We were in no shape to thoroughly explore the tree now, especially when it seems to lead to an extremely large underground space. I vowed to replace it at the earliest opportunity, and even to upgrade it to gold now that I could afford to do so… Along with a set of discreet steel security chains to protect it!

We returned to the first intersection, the one with the talking roots. Ygnas burned them, and they retreated. Can’t blame her.

I thought it wise to explore at least a little further north before returning to the caravan. And it turned out things were equally strange there, if not yet as threatening.

As we headed north we first encountered a mysterious ghostly figure. It appeared to recite some sort of warning or welcoming message, but the message glitched and it wasn’t clear what we were supposed to do or not do. The figure then disappeared.

Past that strange apparition was a circular room with a central rug covering some sort of arcane design. I told everyone to stay off the rug and methodically checked the other exits.

West, a door without handles. East, a corridor.

North, a corridor with a small room to the east, holding a statue of a huntsman with three hunting dogs. There were two mirrors reflecting the statue, and a door at the far end.

u-Heury promptly woke from his shocked state and said he wanted to look for a concealed door under the rug. So he grabbed the rug by one end, started to roll it up, and promptly disappeared.

I shrugged and continued my investigation into whether the mirrors could be removed from the wall for resale. The impetuous barbarian would turn up again on his own, or wouldn’t; we had no idea where to go and were in poor shape to face danger, so rushing around would do us no good and might get us killed. For all we know he could have teleported to another plane.

Sure enough he turned up a few minutes later, insisted that it was perfected safe to remove the rug so long as you didn’t step on any of the uncovered bare sigils, and disappeared again as soon as he stepped on the rug.

Meanwhile Ahnjela entered the statue room and admired her face in the mirror. She seemed disturbed by what she saw and immediately wanted to smash the mirrors and the statue disappeared. Very odd place, everything keeps disappearing. Eventually I let her smash the mirrors because I couldn’t figure out how I would get them out of the tree passage, which was much smaller than the mirrors themselves.

Eventually u-Heury came back from where he had disappeared to and stayed long enough to explain. He was teleported (both times) to a long open corridor, sort of in a funnel shape, with at least three doors leading out. And lots of bats, which he apparently disturbed.

Eventually we decided this was a problem too large to solve at an overnight caravan stop and left, but not before Ygnas tried to set fire to the tree roots. I didn’t object; they were due a touch of Denara’s wrath after their despicable theft of her symbol. Regrettably the tree was only faintly smoldering when we left.

The rest of the trip to Eastdale went without incident.

I made inquiries after a goldsmith to craft a new holy symbol, but the town is tiny. No luck. I did find a merchant who secretly followed Denara, and paid a fair price for his wooden balance scales. I will return it to him, or even a better version, when I can. I give thanks to my lady of letters for her foresight in positioning this worshipper here for my day of need.

After a quick episode of worshipful shopping to replace my damaged mace and sling, we rested and I sought out information on the true purpose of our expedition. We had a talking frog who wanted to go home, and promised great rewards for our aid in achieving this. For my part, I was already preparing a lost of expenses for reimbursement.

It seems we were quite close to the Dolemwood, but it contained within it many ponds and lakes. A man in the market, rather ruled by his superstitious nature, was at least a le to direct us to a ranger with knowledge of the area. We made contact with that worthy if rather rough fellow and learned that the frog’s pond is likely Mirror Lake, which lies near (or perhaps fully surrounds) a place known as the Manse of Yggrane. Perhaps it has some connection to my fellow men of the cloth? I shall try to make inquiries before we depart. The ranger agreed to guide us there and back for a total of 10gp.

Tonight, I will ask the frog some tough questions concerning this Manse.