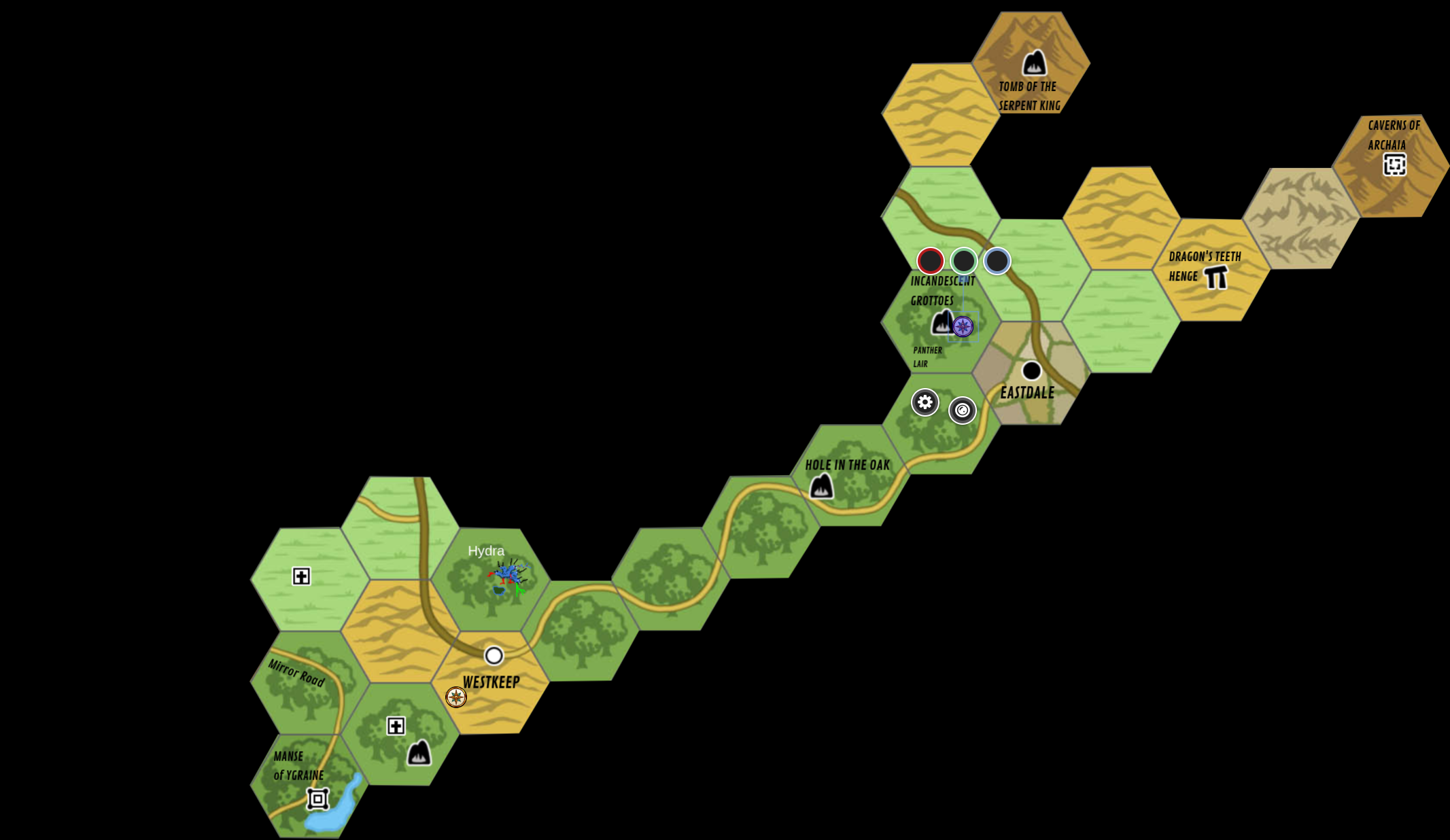 We left the altar the next morning and headed into the hills. Almost ran into a caravan of orcs. Lots of orcs. Luckily, they didn’t notice us, because there were way too many for us to handle. Wonder what they had in their wagons, though. I took first watch twice during our travels. No one was watching me, so I could over-enthusiastically poke the fire all I wanted. None of the embers that fell out started a wildfire, though. Sad.

We headed into a damp forest. Too wet to burn. While we were walking through, we stumbled onto a huge snake thing with seven heads. Oscar said it was a hydra. We ran. It didn’t come after us. Which was good, because apparently the heads grow back if you manage to wack one off. Or maybe Oscar was just trying to scare me.

Next we ran into three weird dog things. They seemed smarter than normal animals. Yip wanted to talk to them. He did some druid thing and went off to try to talk to them. Oscar thought (hoped?) he’d get eaten. I was planning the lovely fire to burn his remains, but he came back unharmed. Didn’t tell us anything about what they said, just to leave them alone. But not why. Without a why, a warning carries no weight with me.

We made it to town. I got my mace fixed, and went shopping for supplies. It was nice to sleep in a bed and have hot food someone else cooked. Oscar’s right about that part of his civilization rants. Barbarian child and Yip ran around committing criminal mischief and got disciplined by the guards. Ahngela got her frog sword made. Creepy thing. Way too many eyes on that thing. Open eyes. Could have sworn they were closed when she got that present at the lake. Oscar did … whatever paperwork or whatever he does.

We headed west to try to find Barbarian Boy’s barrow from his dream. I think it was west. I’m directionally challenged. Encountered a group of adventurers along the way. They let slip they were looking for whatever was killing cattle around town. Oscar ruined my fun by straight out telling them about the hydra. I wanted to say the cattle killer was north of town in the wet woods. Coming across the hydra would have been a fun surprise for them. I pouted the rest of the way to the barrow.

We found the barrow, but there was some sort of ritual going on in the standing stones in front of it. Two men in black cloaks with silver daggers chanting over a stone with a woman bound on it. The males all immediately attacked, thinking they needed to save the woman. Ahngela killed one of the men with one strike. The woman started yelling and screaming that the ritual had to continue, and that she wanted to sacrifice herself to save her village from … something. They needed virgin blood poured into the lake by their village in order to keep the something from attacking the village.

The males all patronizingly assumed the woman was drugged or brainwashed. Heaven forbid a woman be willing to sacrifice herself to save her village. Apparently they think that’s a male thing. I whispered to her to play along and they’d let her go, and she could use the knife at home to pour her blood into the lake, but she insisted it had to be done by the ritual. I wonder who came up with the ritual in the first place. After discussions, and me strenuously objecting to any suggestion that they “save” her by making her no longer a virgin, we asked them to wait while we investigated the barrow. Then we’d accompany them to the village to see what we could do. I’m not telling anyone about my “unicorn approved” status, lest someone decide I’d make a good substitute for the sacrifice. Oscar insisted that in return for saving the village, the woman be an acolyte in his new temple. I guess his god doesn’t mind if people are forced to serve her under duress and without consent. Now, I make a lovely big fire as a funeral pyre to the dead guy. Such pretty flames…

So I forgot to mention something about where we stayed last night. It wasn’t a holiday inn express. Instead it was a standing stone, kind of an altar, with a few more stones around it in a pattern. It was probably an altar of the old gods, mostly forgotten (for good reason!). Yip tried praying to it and sleeping on it. He’s weird, dangerous and unreliable. Nothing he did seemed to get any reaction, which is probably for the best.

We got a little lost after that. (Perhaps our guide was suffering a sore back and little sleep?). Eventually we found a large party of orcs, leading wagons. There were several dozen of them, so we did not approach. It would have been nice to know where they were headed and whether the wagons held more of the dismembered corpses we had found before. Something about that lingers, worrying. But with the numbers so far against us, it wouldn’t be a safe bet to make contact.

No one among us felt confident enough to follow them in stealth. They did, however, leave enough tracks for us to find our way northeast, into a forest, and apparently a dangerous one. We lost the orcs but did encounter, first, a hydra (we ran!) And then a strange group of jackals or giant hyenas. Even the druid was unable to say which. He wasted his spell talking to them and came back the next day telling tall tales.

Our next stop was Westkeep itself, to restock provisions and engage in the worship of commerce. Sadly our journey was not profitable by mundane measures, though the deed to the mill is surely of substantial value… In fae courts, not mortal ones.

I conducted research on the mill itself, and the local authorities disclaimed any authority over the mill. Apparently there are villages to the south that may make such a claim, so I will search them out and see what can be found. I found two local laborers willing to help me establish a temple on the site. My first task will be to make the place livable, and then profitable; I will employ woodsmen to bring down trees from Dolemwood and sell those to begin with.

Ahnjela had her gift from the fae attached to a sword blade. When she did the frog’s eyes opened; all five of them. That is one very weird frog.

u-Heury made friends with a local grandmother who had issues with something attacking her cattle. I have a feeling that the not-quite-jackals we met earlier, the ones the druid spent the night with, are responsible. I am not sure how to bring this up with the druid. It’s always hard when your friends are against your new girlfriend.

After reprovisioning we left town again, this time seeking u-Heury’s mysterious barrow of dreams. I’m not surprised at a young man dreaming of women, but not usually in barrows advocating for grave robbing. The young man may need counseling. Yet the first step to any such spiritual advice (after filing “Notice of inquiry regarding nocturnal visitations”, of course, along with “Authorization request for rendering advice to those outside the faith”) is to confirm whether his dreams are internally generated, or the result of some, possibly malign, external influence.

We didn’t find an answer, at least not right away. We did find a small party of adventurers, a halfling and two bodyguards. They called themselves “Two and a half men.” They mentioned a reward for whatever beast is savaging the cattle. I may have to get the druid arrested by the town guard (not difficult, he keeps digging up the streets to plant acorns) so the rest of us can go kill his girlfriend the hyena before she kills more cattle. We just won’t tell him where she went or what we did; she’ll be the girl whose parents moved away during their summer romance. Probably for the best. How long before she starts wanting kittens and settles down with a nice hyena from a nearby pack?

While I was ruminating on this, we found a barrow, and in the process interrupted a ritual sacrifice. A young lady lay bound to a rock, dressed in what appears to be the latest fashion in single-use negligees. Two men in black robes stood over her conducting a ritual with silver knives. It seemed they were about to kill her, so we attacked; Ahnjela snuck up to interrupt the ritual at close range and the rest of us readied missile weapons and prepared to charge.

Ahnjela struck first and slew her victim, the one chanting and waving his dagger around, with a single blow. The rest of us fired upon the other man, wounding him badly, and he surrendered. At this the young lady protested that the ritual must go on! (I have heard of actors dedicating their lives to the role but this seems excessive!)

This brought the whole fight to a halt in utter confusion.

Eventually they explained that their village is required to sacrifice a virgin occasionally (how often?) To avoid the wrath of the Big Chuck? Whatever a big chuck is. The young woman volunteered and claims to qualify. I don’t believe her; who volunteers for their own ritual sacrifice? Clearly some kind of charm spell is at work here. The man says they have a week to complete the ritual, which requires the blood of a virgin spilled with a silver dagger into a copper bowl then poured into a lake, “or else.”. The monster was last seen ten years ago when they tried to exploit a loophole in the wording and failed.

But, they didn’t have Oscar Blaine, a dedicated cleric of Denara, to look for that loophole. I have ideas.

Also, if we find a way to save this village without this sacrifice, the girl can live, and will owe me her life. And I need acolytes for my new temple. Works out perfectly, except she is very, very insistent on going through with the sacrifice, which I really can’t just let happen. Not without the young lady signing all the required consent forms first, and that would take weeks of paperwork. (Sigh. Be still my beating heart. Weeks! Of paperwork!). And surely I could talk her into taking up Denara’s cause after such an experience. Clearly so much better than being stabbed in the heart!

Seeking to at least get this particular young lady out of danger, I asked if there was perhaps a young man in her village she fancied, so we could arrange for her to no longer qualify for the sacrifice. This did not go over well. (Pity; I haven’t ever had the chance to file for a replacement sacrifice due to virgin disqualification before).

We came to only two conclusions: we, the adventurers, would explore the barrow before making any decisions about sacrifices; and they, the sacrificer and the sacrificee, will wait until we have the chance to try to find a better solution before continuing their murder-suicide pact. We have a week, surely I can find a loophole in whatever strange bargain is involved here.