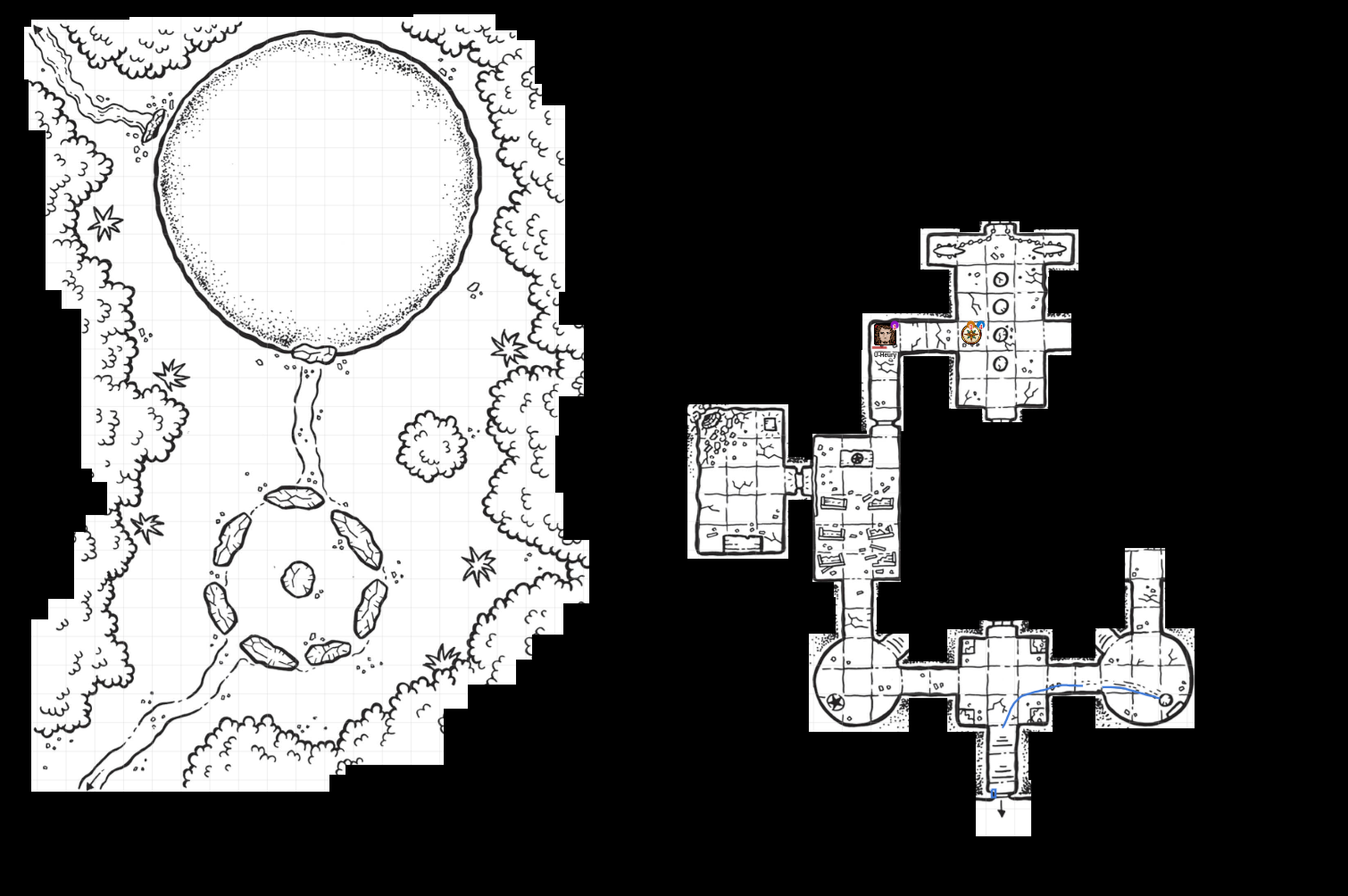 I dropped Snausages off with the group and headed down to Westkeep, where Oscar has gotten himself off to. I guess the man was chasing rewards from the talking frog. I bumped into him in the Dolemwood,I guess after he interrupted some sort of ceremony. He wanted to make arrangements for some sort of new temple on the woods. I thought his god was all about civilization? Anyways I agreed to investigate this ceremony thing and the barrow on his behalf. He had some sort of claim on Yvette, the self-sacrificing redhead. Something about becoming an acolyte? It wasn’t very clear. I’ll try to stop by his temple on the way back to Westkeep to ask what to do with her.

After asking a few questions about the ceremony, I figured the best way to keep everyone out of trouble was to confiscate the silver ritual sacrifice knives while we explored the barrow. No murders or suicides without the special knives. At least I hope not.

For future reference they each had some sort of symbol on a golden torc. An owl. Ygnas said it was a Drune symbol, which means nothing to me.

We found some sort of hole in one side of the barrow. Almost big enough for u-Heury to fit. He refused to take off his armor to do it, which was smart, but I think he was mostly trying to hide that he doesn’t have any hair on his chest yet. Kid, we know already.

Instead we used a rope to pull the front door (a solid slab of stone) down. That led to a staircase down, into a square room with strange artifacts. A cross, a book, a candle, and a cherub, all covered in yellow mold. The room had a dust covered mural on the floor, passageways east and west, and a pair of doors to the north.

I was just telling everyone that we should clean up the mural in case it had clues to what was obviously a puzzle. While I was talking Ygnas lit the candle on fire and all four objects animated, bleeding about sinners. We killed them all, though they left a puff of dust behind that choked us a little each time. Then we cleaned off the mural. It’s a depiction of St Clyde. No obvious clues, unless we were supposed to pick the cross because St Ygg?

There was some writing. Turns out Ahnjela’s frog sword – she’s named it Faerloche – lets her read frog-speak.

To the east is a room with a mirror that once held a display point for a statue. Marks on the floor show where the statue walked out? Or was dragged out? Also a stair down and passage north.

To the west is a similar room, only with a statue. It’s the elf chick haunting u-Heury. Blindfolded. Weird.

We went north and found a small chapel with a statue and pews. Light a candle in the statue and wind blows out your torch with weird sound effects. Who puts a chapel in a tomb? There’s also a secret door behind a tapestry, leading to a smaller room that might be an office, with two desks. I found a moldy book in one, after we killed three strange worms.

Ygnas found a loose flagstone with some treasure inside. Healing wafers and some other stuff. It was in a lockbox, which u-Heury managed to open. He also managed to get poisoned by a trap on the lock, which knocked him out. Ahnjela recognized the poison, and said he would be awake in an hour or so.

I took the opportunity to draw a moustache on his face. It’s doing him a favor; the chicks will dig it.

North from the chapel room is a larger room with pillars and two statues that resemble guard dogs. We left u-Heury just outside that room while we explored further.

My babysitter is gone! Oscar wandered off, probably to the mill where he wants to put a temple. Feverborne showed up and got up to speed on the villagers wanting to perform ritual sacrifice. I noticed they had gold torques around their necks, some sort of Drune symbol of an owl, but I didn’t know any more than that. Feverborne took the silver knives, and the others hoped that would prevent the ritual from going forward while we investigated the barrow. I don’t know why everyone is in such a tizzy about going to their village and helping them with some monster. If an entire village, multiple generations, weren’t willing to just kill the thing, and instead caved to it, killing their virgin women instead to appease it, then they deserve to live with it.

All of us had to struggle with the stone in front of the barrow entrance. We finally pulled it open with a rope and lots of effort. The dust in the passage to the first room indicated no one had been in the barrow in some time. The room just inside the entrance had a cross, a cherub, a book and a candle. Of course I lit the candle. That made all the artifacts start floating and talking about the rest of the party being sinners. They seemed shocked when I helped the others destroy them. The artifacts poofed into choking dust. Feverborne cleared the mural on the floor. I was busy holding the torch, of course, so I couldn’t possibly help. Ahngela discovered she could read the words in the mural if she held the frog sword. She then named her sword.

There were double doors ahead of us, and passages to the east and west. I don’t know why we didn’t go through the double doors. It seems like that would be where the dead guy would be that Barbarian Boy needs to get the ring off of. The room to the east had a base where a statue should have been, in front of the mirror. Nobody was dumb enough to look into the mirror. It made me think of the mirrors in the creepy tree place, where the statue of the hunter and two dogs had disappeared when someone looked in one of the mirrors.

The room to the west had a statue of the elf lady that Barbarian Boy had seen in his dream. Only with a blindfold on her, and with a hand raised as if urging quiet. That wasn’t ominous at all. I didn’t want to go west, because that side of the barrow was where there had been a hole with slime outside, but everyone else wanted to clear the place out. We found a deteriorated chapel with tapestries on the walls. There was a candle on the altar. There can’t be two creepy candles, right? Feverborne grabbed me before I could light it. He’s stronger than me, so I didn’t struggle or bite him. Eventually he let me go and let me light the candle. The torch blew out in a wind that came out of nowhere, and we heard sounds of a battle. I relit the torch, the candle blew out, and the sounds disappeared. Apparently there can be more than one creepy candle in this place. And also apparently, I’ve only substituted babysitters. Oscar must have warned Feverborne to keep an eye on me. Interfering busybodies. I have to wonder, though, why a chapel in a closed barrow? If it wasn’t always closed, then why was it suddenly closed up?

I found a secret door behind a tapestry along the west wall. Barbarian Boy rammed into it and opened the door. In that room were three gross pink worms with teeth. Well, that explains the slime outside. The worms attacked, but Barbarian Boy, Ahngela and Feverborne killed them. The room had a roll top desk on one end and a table on the other. Feverborne pried open the desk drawer and found a moldy book. Ahngela found a hidey hole in the floor that had a metal box in it. Barbarian Boy made himself lockpicks out of wire. Who carries a spool of wire on an adventure? He successfully pried the box open, but also missed the poison trap and fell unconscious. The box had a prayer book, a cross, a scroll, and a box of wafers. I ate a wafer and my injuries didn’t feel as bad.

Feverborne borrowed some ash from my torch and drew a mustache on Barbarian Boy. Ahngela said he’d be out for about an hour. We propped his body in a corner in the hallway to the north of the chapel, while we explored a bit more.