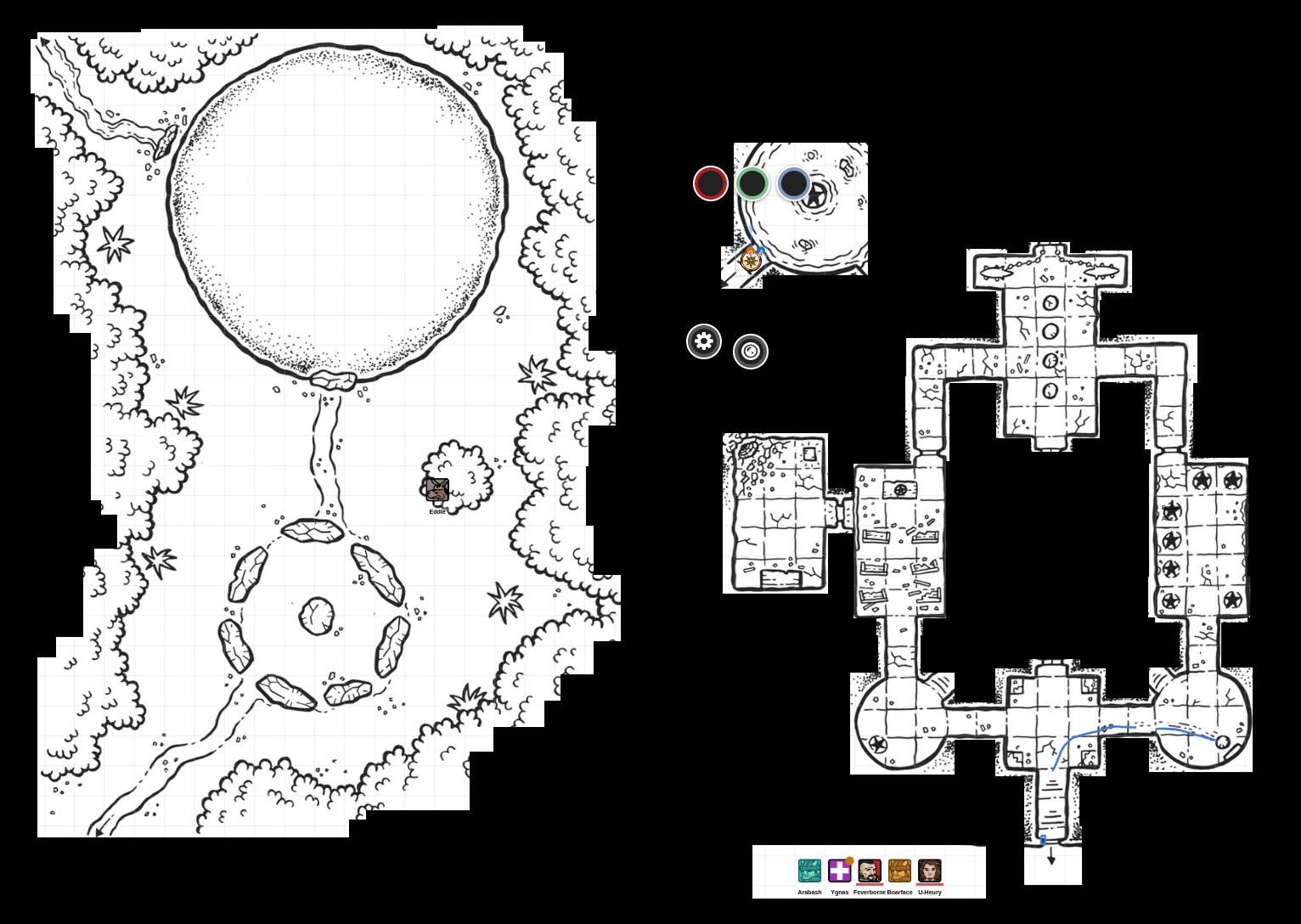 So we dragged u-Heury through the big room with the pillars and the dog statues. Whatever was on that needle really put him out. We left him propped up in another corner to investigate another room. This place has been pretty symmetrical so far, but the Eastern version of this room had statues and a moldy tapestry on the east wall. All the statues had solid weapons, real ones. One of each type; sword, spear, halberd, mace,etc.

Of course the statues are going to come alive and try to kill us, that’s just what statues do. But I had a plan. I walk in bold as brass and start clicking my tongue and criticizing the place. That mold is a health hazard. Can’t breathe that stuff. Talking like I was inspecting a barracks, only for a museum. Got a good look behind the tapestry with u-Heury’s spear. Got a Nasty whiff of the mold doing it, had a coughing fit for a few minutes. Didn’t see anything behind the tapestry, but it really wasn’t a good look so I explained we were gonna have to burn the whole thing because of the mold but we would come back with a new one, still talking like a Sargeant, or maybe a museum curator. Almost the same thing, right?

About that time u-Heury woke up, so we took him out into the woods to make some treatments for the mold, then came back to burn it. I had to drag Ygnas away from the smoke. So glad Oscar warned me about her. Nothing animated and killed us. But the cultist girl was dead on the altar and being eaten by wolves. It was messy. Oh well; I had figured taking their sacrificial knives would keep the girl alive. Guess not. Maybe we can sell the knives?

So I inspected the weapons for rust and declared they all needed to be removed for cleaning. And we removed them, in several trips. Nothing animated and killed us. u-Heury did look at the mirror on the way out and promptly froze, so we had to drag him out too. Took him a few minutes to come back.

He did say the mirror looked valuable, though. Carvings of unicorns in silver and such. And, y’know, it freezes people. If we can find a rich guy who can’t get his wife to shut up it’s worth it’s weight in platinum. And it’s damn heavy.

I gotta remember to ask the kid what he saw when he was out of it. If anything.

We decided not to press our luck further, and headed back to town. Stopped at Oscar’s new temple. Zero stars, would not recommend until after extensive renovations are complete.

The local priest of st Ygg told us the sword from the statue is magical. Nothing else was. Good thing I use swords. The other two must be so disappointed. Kinda wondering where Oscar got off to if he’s not at his temple or in town.

Bought a bunch of supplies, two men at arms and a mule. It’s like that Merc group Oscar met, two and a half men, but the half man is a mule. I named him Eddie, because he reminded me of a story about an ogre who befriended a talking donkey.

One of the armsmen calls himself Taserface. No, wait, Boarface. What a sad, sad name. Apparently this guy’s own mother failed to love his face.

We made our way back to the barrow, prepared to haul out everything that could be hauled. We’re gonna be rich.

We poked our head into the staircases leading down. There’s a pool of water at the bottom, and a statue. u-Heury took the lead. Kid doesn’t lack for courage so long as you don’t mention magic; brains are a different story. He poked at the water a bit, walked in, and disappeared.

We’re gonna go pack up the mirror and put it on the mule (we left it tied to a tree outside) before trying to go after the kid. Maybe he’ll come back in the meantime?

We took a quick look at the next room, with four pillars in the middle, two sets of double doors on either end, and stone dogs chained to the north set of doors. Ahngela wandered off. Neither Feverborne or I were keen to open either set of double doors. Feverborne lugged the unconscious Barbarian Boy to the hallway to the east and we investigated the room connecting to the room with the mirror.

There were a bunch of statues of men holding real weapons in that room, and moldy tapestries along the wall. We were positive the statues would come alive and attack us. Feverborne poked at the tapestries with a spear, and promptly had a coughing attack from the mold. I dragged him back out of the room to limit his exposure to the mold. I heard a noise like bones. Looking in the room with the pillars, I saw two shiny skeletons floating in the air, as if dancing around. I ducked and hid the torch, trying not to attract their attention. Eventually, they faded away. That freaked me out, because they were not there when we came through, so where did they come from?

Barbarian Boy woke up about then. He didn’t seem impressed that he missed dancing skeletons. Feverborne stopped coughing his lungs up. After some discussion about taking the weapons, because the boys were lusting after those weapons, we went outside so Barbarian Boy could make something to treat the mold. Well, we tried to go. He looked into the mirror that the rest of us have assiduously avoided and froze. Feverborne threw him over a shoulder and took him outside, where the sunlight revived him. He didn’t say what he saw in the mirror. Feverborne immediately wanted the mirror, saying it would sell for a ton of money. Zuul isn’t interested in money, but I’ll help them acquire more money.

While the kid was assembling the herbal treatment, we noticed that the cultists were gone from the stone ring. Wolves and vultures were picking at the remains of a girl. So, she got her wish after all, regardless of the lack of silver knives. Fine. But dumb on their part, because now the rest of the party doesn’t know where to go to deal with the lake monster, and the villagers will just have to keep killing girls who might not be as willing as this one was.

We went back inside. I got to set fire to the tapestries. I was happily lost in the lovely flames, but Feverborne dragged me away. I sputtered at him in protest, but it was getting smoky in there, and it was nice of him not to let me die of smoke inhalation. I watched the rest of the fire from the doorway. No secret doors on the wall under the tapestries on this side of the barrow. We each grabbed a weapon and prepared to run. The statues didn’t move. Yet. So we took the rest of the weapons. I fully expect those stone bastards to come alive at some point as we investigate the rest of the barrow.

Not wanting to press our luck, we headed back towards town. A self righteous cleric of Ygg cast a spell to see if the weapons were magic. Useless spell good only for morons of that useless god. The sword Feverborne grabbed was magic. We set the rest aside to sell. He talked me into keeping the flanged mace, so I’d have a spare. It is pretty, so I did. Barbarian Boy required a few days to rest, so we did what shopping we could. Feverborne hired two men and I split the cost of a mule with him. Seems only fair. I’m not using my money for anything else. If I’m helpful, it’ll lull them into complacency, and they won’t watch me so closely.

I offered to take first watch on the way back to the barrow, but Feverborne ruined my fun by having the hirelings sit watches as well. Boarface muttered I was a witch when I innocently stirred the fire maybe a teensy bit too hard. I glared at him, instructed him on the difference between a cleric and a witch, and told him all about Zuul. His eyes glazed over by the time second watch got up. He’s the first one getting pushed through the double doors with the stone dogs. I hope they eat him.

Yet again, no one wanted to touch either room with double doors. So Barbarian Boy tied a rope around himself and started down the stairs to the room below with water. I was offended that he put out my torch I let him borrow. He said there were floating ghost candles down there. Creepy. He promptly vanished when he touched the water. Well, that’s exciting.

I’m betting he’s in the mirror, but I’m not about to look.