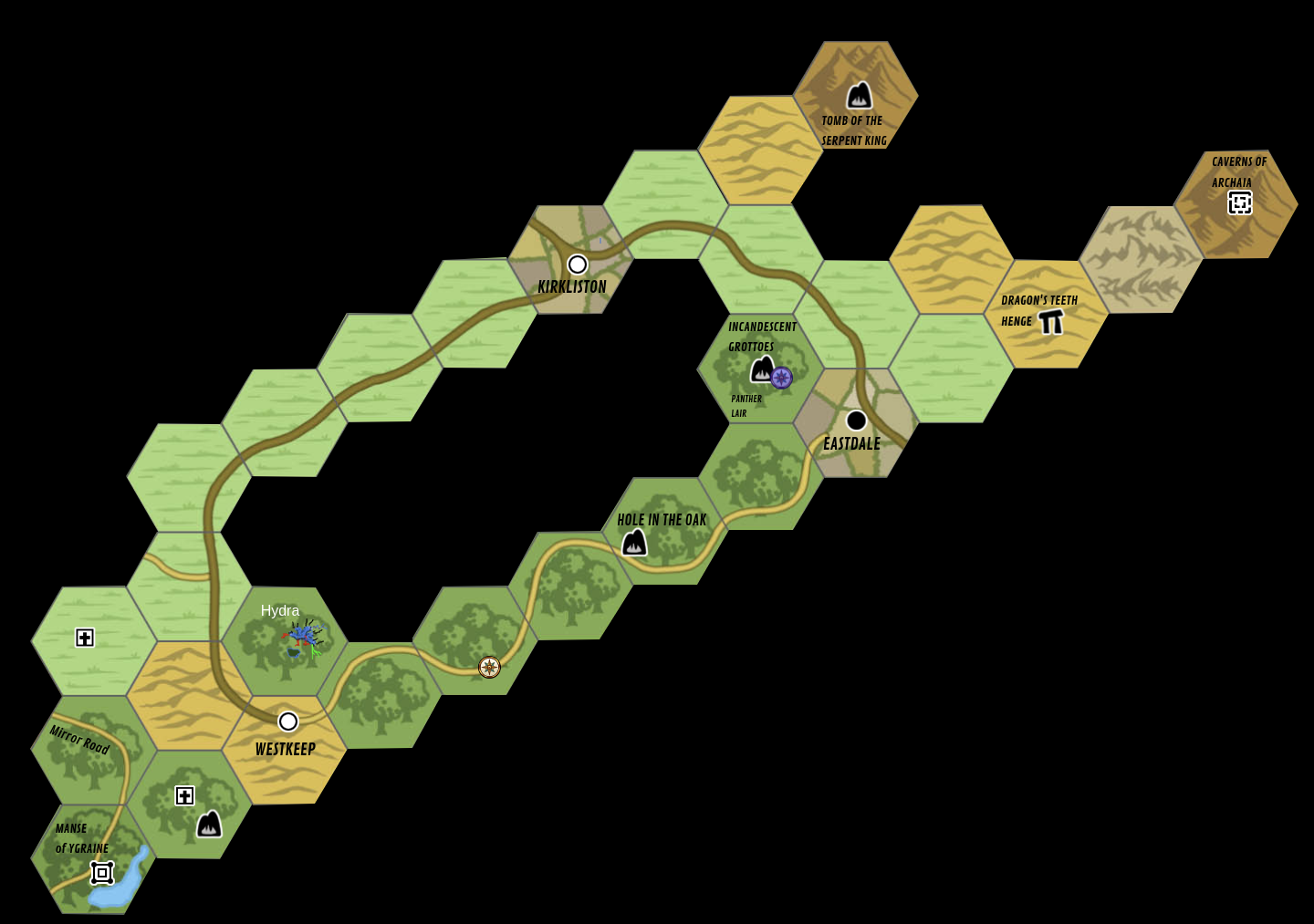 Another year flew by. I set up my stall in the Eastdale market and preached the doctrine of Denara, and spent some time commissioning a proper holy symbol to replace the one stolen from me – only this time in good, an upgrade from the previous silver. I commissioned at the same time a silver symbol as a replacement for the wooden one i had borrowed from a lay worshipper in Westkeep. My adventures were turning a profit, and I could now afford the expense… Still, the loss of my first silver scales burned in my mind. I gathered a few companions and set out from Westkeep towards Eastdale with a load of lumber in the wagon we had used to transport Feverborne’s body for revival. The path would take us past the tree where the theft of the silver scales occurred. My friends and I would explore the roots beneath and see if my property could be recovered.

Before we had even reached the scene of the crime, however, we were attacked by four giant frogs. Well, toads. I killed mine after four swings of my mace and an assist from u-Heury; I must be out of practice after spending an easy year. But since when are toads poisonous?

The mules almost got away from us, but we managed to catch up before they got too far.

I spent the off season doing some soul searching. I announced my intention to research that creature, so we could go in next time with a plan. Bern offered to help. I took him up on the offer. Libraries and talking to people aren’t my strong points. If he wants one of my favors, he’s welcome to one. We found out that the monster is a gibbering mouther. If we can block our ears, we can avoid the gibbering part. It can attack up to six times, and it doesn’t like fire. I have some candles that we can use to make wax earplugs, and I bought some oil flasks and torches. I wonder if I can fire flaming crossbow bolts? I did a job in the town to the north. No poison this time, just dagger action. With the money in hand from that, I spent the rest of my time conditioning and trying to get stronger. I think it worked. I definitely feel better.

Most of the party seemed to spend off time at Oscar’s mill, so I went there and met up with Oscar, Landon and Barbarian Boy. Landon had snuck out earlier, to escape the crazy Yggs’ inquisition. Ygnas wandered in from whatever religious meeting she’d been to. She had a crazy look in her eyes, and she was twitchy, eyeing the woods around the mill and muttering about burning everything. I hadn’t met Oscar before. His god seems entirely reasonable, for a god. Commerce is good, for both my professions. Too many forms, though. And that man has a prodigious ability to talk. I wonder if anything else about him is prodigious? We devised the plan to find Oscar’s stolen holy symbol in some tree place, then wreck vengeance on the monster in the grotto. Oscar decided to bring a load of lumber on the way back, to trade. Weird, but it is commerce. There are worse ways to worship a god, I suppose.

Our peaceful trip back was interrupted by giant frogs attacking the mules. Frogs. They don’t even have teeth! Barbarian Boy discovered the hard way that the froggies did have poison, though. His horse got hit and almost went down. He and Landon backed off. Oscar and I engaged the froggies up close, while Barbarian Boy shot at them, and Landon poked at them with his polearm from a distance. It took a while of misses and wild swings, but eventually we killed them all. Unfortunately, they spooked the mules, who started to run off. Barbarian Boy slowed them with his horse, and I jumped on the back of the wagon and grabbed the reins. Oscar’s trade prospects saved. If there are giant poison froggies in these woods, I wonder what’s in this tree thing we’re going to?