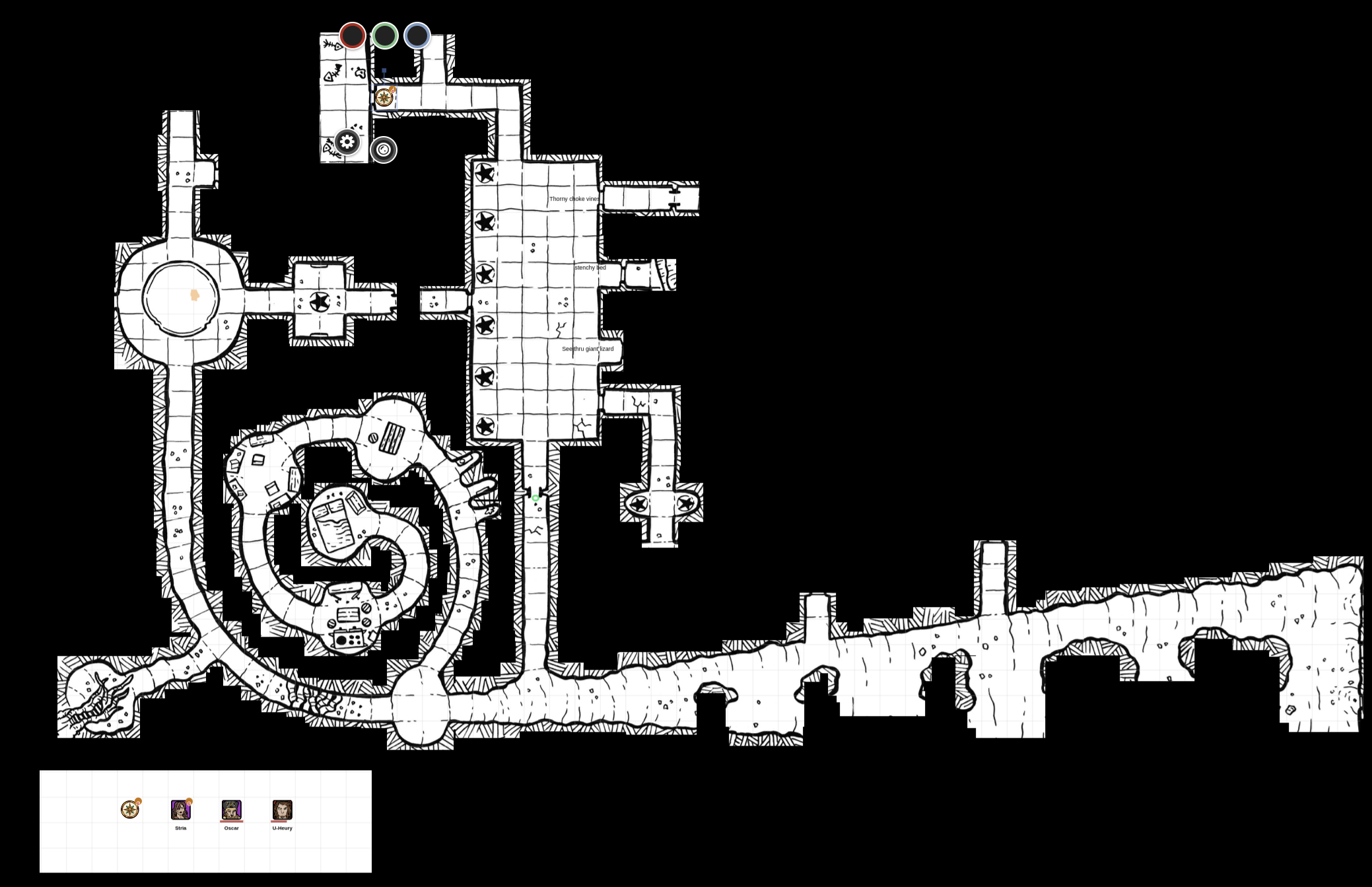 We left Ahnjela to guard the wagon with the mules and lumber outside the hole in the oak. The rest of us – briefly regretting that we had failed to hire a torchbearer or mercenaries – descended in the space below the tree.

The thieving roots had grown back somewhat, but were too weak to actually steal anything, and the special harness I had made for my new set of holy scales kept them safe. I grasped my wooden symbol firmly just in case.

Beyond the roots, we followed a passage north to the lair of the lambkin. Just a quick pass to see if anything had changed. Nothing had, except everything smelled of rotten meat and filth. We did find Stria a pouch of tea in case she needs to knock someone out and tie them up in bed. They also had a collection of fairy tales about stupid human children with suspiciously abrupt endings.

We proceeded to the east, past the talking roots. u-Heury sought information from them, and I consulted my notes as to their prior answers.

After brief fruitless inquiries, we continued into a large cavern. u-Heury remembered flappy bat-like things. Probably stirges. We took a left at the first opportunity. There was a large archway in the middle of the passage that we would need to pass through to continue. The archway was carved of decorative skulls, with a single larger skull as the keystone. A real skeleton lay on the floor of the archway, clearly dead of a large slashing wound.

A trap, obviously. Were I not a reformed gambler I would lay money on it.

I made a loop of my rope and fished the body back. It had some small amount of coin, a longsword, and a brass skull necklace.

Some poking with u-Heury’s spear found the floor tiles that triggered the trap, which we marked with the skull and jumped over.

Shortly beyond the archway we found a large chamber filled with doors and statues, along with two doorless passageways. Like the one we entered by, two of the passageways out had archways. One of them was carved with vines and had a dead dwarf, not yet skeletal. The dwarf had a vine around his neck, and appeared to have died in what was either an elaborate autoerotic asphyxiation play scenario or a non consensual strangulation by tree root. The other archway had snakes and no body, probably leading back to areas we had already explored. The dwarf had nothing of interest on him, but was missing a boot.

The statues were roughly carved humanoids with carved weapons and accessories – save the last one, which had my silver holy symbol around it’s neck, the one I was here to find. Vindication! My lady of the balanced deal will smile upon me once more.

We also found a lone boot behind the statue. It matched the one on the dwarf.

Around that time a group of four lizardmen came through performing some sort of ritual involving salt. They seemed drunk, but talkative enough, though they did not speak the language of civilized men well. Something about not going north, and guarding their territory from a great big rock with many eyes.

At least the words of the roots earlier were becoming clear. “Reptiles guarding a great enemy” clearly referred to these lizardmen, but also mentioned queens.

We let the lizardmen continue uninterrupted, then opened the southernmost door leading east. It turned south almost immediately, leading us between two statues – humanoid, one fish and one mantis, both crying some white substance. A broken crossbow lay on the floor between the statues. We all looked for traps, found nothing, and noped out. Another door has strange, smelly lava flows, and we closed that one immediately too.

Down the next passageway we found spiderwebs, then an open room with two translucent figures fighting. One human with a spear, one giant (at least eight feet tall) lizardmen. The human died quickly and the lizardman charged. We all retreated, but I pulled out my holy symbol and called upon Denara’s power to protect us all from those who no longer pay taxes. Alas, it seems this lizardman was paid up with his local assessor. Still, Denara protected me from his claws, and we fled out the door, shutting it behind us. Stria nailed it’s eye with a thrown dagger as the door was closing and it did seem to be hurt by the blow.

I still don’t understand the translucency.

Eventually we went north, into an area of increasing stench, and surprised three troglodytes in the middle of a meal.

We stopped by some big tree with a hole in it. Oscar said his old holy symbol was stolen in there. Roots that try to steal my daggers and a room with talking faces demanding money for information, those he neglected to mention. He said the information the faces gave was useless, since he tried that the last time he was here. But what they told him sounded pretty important to me. A room of horrors holding a treasure, a sword in a pillar, reptile worshipers who entombed a great enemy guarded by his queens. I’ll be looking out for what those mean as we wander around in here. We went around the inside rooms, and Oscar found a bag of tea that was pretty much the only thing not decomposing. He said it would put someone to sleep. Could come in handy.

Then we started through a hallway past the faces. It led to an archway decorated with skulls. That’s not ominous at all. A skeleton was lying in the archway, with a big gash in the armor, so there was obviously a trap there. The kid poked with his spear, and the trap was a scythe contraption. They put the skull on the tile that triggered the trap, so we’d know where it was. Beyond that was a room with statues split by a door on the left and doors on the right. The statues all had crowns. The one on the far end had Oscar’s old holy symbol. He borrowed the kid’s spear to switch his old holy symbol for a wooden one. We checked the southern most door on the right side. It led to a hallway with two statues facing each other, and a smashed crossbow on the floor between them. Both statues were crying white liquid. Obviously a trap, but we couldn’t figure out where. I looked at the ceiling, and a little root came down and motioned to the north, then I swear the thing giggled. This tree seriously creeps me out.

We checked the next door, from which the kid said he heard battle sounds. I was going to sneak down the hallway beyond, but ran smack into spider webs. Big thick spider webs. I hightailed it back and grabbed the torch from Oscar. Screw sneaky, I needed to burn the webs and make sure no insects got on me. That hallway led to a room where a see through lizard man was fighting a see through warrior. Great, ghosts. The lizard man handily beat the warrior while we watched. Then he came for us. I was thinking it’s a ghost, what can it do to us, but the things claws scratched at Oscar’s armor, so there went that theory. I threw a dagger for the first time ever, and hit the bastard in the eye. That proved we could hurt it in return, but we ran for the door anyway and locked it behind us.

Back in the main room, the kid listened at the next door while Oscar looked for secret panels on the other side. I stood holding the torch in between, so they both had light. We really should have brought cannon fodder to hold the torch. Then more lizard men came in the room from the north hallway. They were chanting and sort of stumbling over their feet. The leader spoke some common, and said we were disturbing their ritual of protection against some rock thing with many lights. Whatever the hell that is, I wanted them to keep protecting the place against it. They went through the door between the statues. They hadn’t wanted us to go north, so that’s where I wanted to go, but I was overruled. We checked out the next door on the right, but it opened onto a foul smelling room with something snoring. I couldn’t see it, but the snoring was like a volcano erupting, and nobody wanted to see what made that sound or smell, so we shut that door.

The last door opened onto a hallway with another arch, this one decorated with thorned vines. Another dead body. Looked to be a dwarf. I got a note out of the pocket that said something about the possibility of tricking river ghouls out of their treasure. I don’t know what a river ghoul is. I’m not in a hurry to find out. They can keep their treasure. We decided to check out the north hallway after that. Smelled like rotten fish. A hallway to the right, one straight ahead, and one to the left. We opened the one to the left and surprised three troglodytes. I’m pretty sure I can take out one of them.