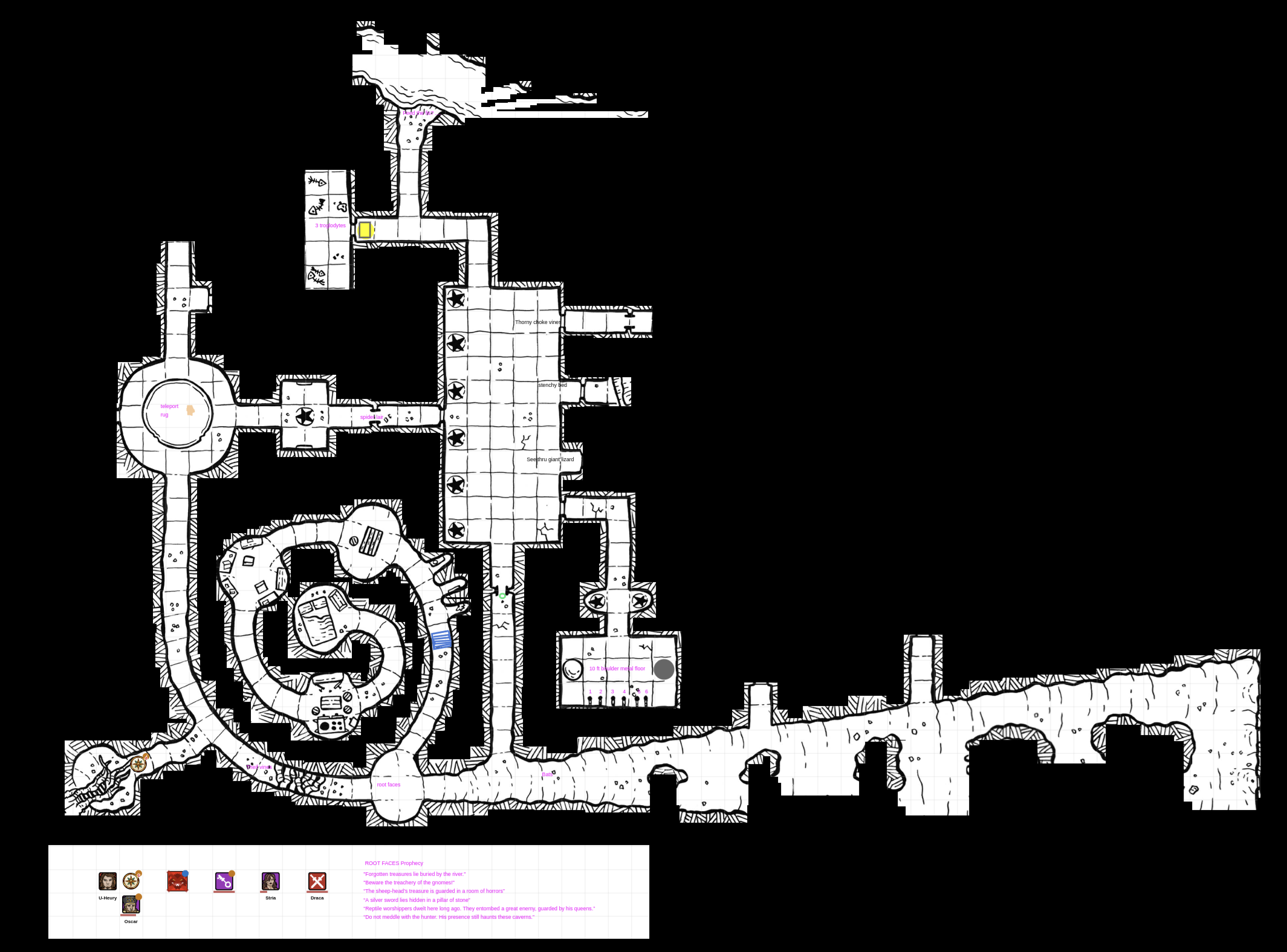 I write with a heavy heart. Tragedy has struck our little group. But I will come to that in time.

We were staring at three troglodytes, all stuffing their faces with fish. After thinking it over for a few shocked seconds, I decided the wise course of action was to leave them to their meal. I waved, apologized for opening the wrong door, and slammed it closed. Lodikai dumped a bag of marbles in front of the door, and I added a flask of oil to the mix. We retreated to the next corridor and waited ten minutes to see if the troglodytes would follow us out. They did not, perhaps because the door opening would be an obvious giveaway.

That corridor led to a river, with a small beach covered in fish guts. Likely where the troglodytes got their meal. Lodikai borrowed another oil flask and launched some fire arrows over the river, looking for a bank on the far side that might make it worthwhile to attempt a crossing. Nothing obvious, but maybe something. Better lighting would help. We left it alone for lack of an obvious reason to attempt a dangerous crossing, and headed back south.

Lodikai volunteered to check the two weeping statues, and determined there were no traps. However, the room immediately beyond was an obvious trap, with a completely metal floor and a large round bolder sitting at one end of the room. On the far wall were 6 levers and a plaque reading “Authorized Users Only”. I immediately pulled out the slate I keep for such emergencies and wrote out a form authorizing our party to enter the room and operate the controls. Denara looks upon such things with favor.

I checked for secret doors, while the others looked around for traps. Lodikai immediately determined that the floor on either side of the room could tilt up and presumably down, like some demented teeter totter. Of course this would cause the boulder to roll around and crush anyone in the room in the process.

He verified this by examining the levers and pulling one of them, which immediately set the room to tilting like crazy, and the boulder to crushing people. Oops. It ran over my lame leg, twisting the already weak ankle. u-Heury was trying to push the boulder at the time and got it worse than I did. We all backed out of the room and took a break to tend our wounds. u-Heury was generous enough to offer a donation on return for my prayers to Denara on his behalf. Such a promising young man…

Before we could get back to our explorations, a strange purple vortex appeared a little bit into the larger room. I called out a warning, and Lodikai swore he hadn’t touched anything. The vortex didn’t seem dangerous, exactly, but I tossed one torch into it and it grabbed another right out of My hand when I approached. I speculated that the portal was intended to return the boulder to it’s original position after crushing anyone in the corridor, which would be confirmed if the torches were in the spot the boulder originated. But they were not.

u-Heury speculated the vortex might be connected to the strange rug portal he had traveled through previously. We decided to head in that direction and see if the torches were there. There were two paths to that rug, one longer but known, the other passing through a very short unexplored area containing a carved archway. The other two carved archways were trapped in some fashion, so good money says …. No, no, I am reformed. Anyways, it seems likely this archway would also be trapped in some fashion. We approached and observed no obvious clues, but when Lodikai sought to make a closer examination, a huge spider dropped from above and attacked!

We traded blows with the thing, doing some damage, but it got fangs into u-Heury when the man bravely advanced to keep the creature’s attention on him rather than our rogue. Lodikai managed to escape due to some very impressive acrobatics. Well, he said they were impressive, but no one saw anything. It was pitch black once you got out of range of the torchlight.

u-Heury was turning green from the bite so we backed off and left it alone. It did the same, staying out of the light… Or so we thought.

Figuring we needed to regroup, we made camp near the entrance and set a watch. The first watch passed without incident. The second was interrupted by Stria’s scream of fury and disgust as the same giant spider we had just fought was descending on u-Heury!

I lept to my feet clad in nothing but Denara’s golden glory, grabbing my mace and shield, rushing to attack. Lodikai was up and shooting arrows. Stria’s daggers were bouncing off the chitin bit by bit. But u-Heury was thrashing about like he was caught in a nightmare, vicious fangs sunk deep into his flesh and pumping deadly poison into his veins.

Finally Lodikai landed a lucky shot that felled the thing. I rushed to u-Heury’s side, calling out to Denara for aid, but I had not yet filled out the proper requisition forms. I could do nothing for his wounds, and alas, even if I could the poison was beyond my power to neutralize. How cruel that the man whose wilderness skills had once saved my own life from the fangs of a two headed snake would die to a similar cause. I bear the marks of that venom upon my neck to this day, and … Now u-Heury will bear the wounds from this arachnid for the rest of his life and into eternity.

I mourn his loss. Though he was far from civilized, and sometimes chased elven lasses wearing too little clothing in his dreams, I know that such things are a part of every boy’s passage into manhood. And he was already seeking to better himself by learning to read. Such a brave soul deserves respect, and even admiration. Perhaps in death he will find the embrace of the elven lady he dreamt of. I will file the proper forms, and speak the proper words.

Unless… Rumor has it that the priest of Ygg in Eastdale can reach beyond the doors of death. Such a thing is beyond my power, yet the young man’s courage deserves the attempt. If we hurry, perhaps u-Heury may yet be saved. But such a service would not come cheap.

Lodikai and Stria are cutting into the spider’s corpse, in search of it’s poison glands. What they would do with such a thing I am very carefully not thinking about, for poison is a very uncivilized weapon.

Faced with the troglodytes, we decided caution was the better part of valor, closed the door, and backed away. The thief scattered marbles on the floor in front of the closed door, and Oscar poured oil over them. We waited to see if any of them would come out after us, but they didn’t, so luckily their rotting fish was more appetizing than we were. We went to check out the north passage, and it led to a river, as the smell indicated. Rotting fish pieces on the little patch of beach. Otherwise just sheer walls. The thief tried shooting a few fire arrows to see across, but it looked like there was no other beach areas on the other side. I was stuck holding the torch. It made perfect sense, the kid and Oscar need two hands for their shields and weapons. But I absolutely hate standing around being decorative and not having both daggers in my hands.

Lodikai wanted to check out the passage with the creepy crying statues, so we went that way. He said there wasn’t a trap between the statues where the crushed crossbow was. Well, something crushed it. We went further down the passage into a room with a metal floor, levers along the back wall, and a huge stone ball. Oh, that’s what crushed it. I immediately got away from the doorway, since standing in the hallway was a death trap. Also stayed away from either way the ball looked likely to roll if the floor titled. Because the thief was all over touching the levers. It seemed the last thing in the world you would want to do, but I was the only one that thought it was a phenomenally bad idea. Lo and behold, he pulled the first lever, and the floor did indeed tilt. The ball rolled over the kid and Oscar. There was then wrangling between the two over payment for Oscar asking his god to heal the kid.

Healing accomplished, we got out of the death trap. To see a purple portal had appeared in the main statue room. That can’t be a good sign. Oscar speculated that perhaps it was to return the ball. He threw a torch into it, and the thief checked the other room, but no torch on the floor with the ball. The kid wanted to check the room with the rug, that he teleported from some other visit. It seemed shorter to take the snake archway, although Oscar wanted to go the long way around. The thief went into that hallway to check for traps, and found none in the archway. Didn’t need any. A huge spider dropped down on him. He said later that he did some epic backflip to get around the spider back to us, but we couldn’t see that far down past the arch. The kid attacked the spider, which then vanished back into the ceiling. It wasn’t going to be flushed out into the open room so we could all have at it. We absolutely should have taken the long way around.

The kid was injured by the spider, so we decided to go to the entrance and camp. While I was on watch, the damned spider crept towards us. I yelled to wake the others up, but it dropped on the kid before he could wake up. Bit him, and injected its poison. He never even woke up. Hopefully he didn’t feel a thing before he died. The rest of us attacked it. I went at it with my daggers, but couldn’t get a hit in. It got me pretty bad, but I dodged the poison. Finally, the thief got a shot in and killed it. He got the poison sacs out. I can make poison to put on our blades later. Oscar and Lodikai and I debated whether the kid would want to be resurrected, like Feverborne was. I was saving up money for my assassin school someday, but I’d put it towards that. The kid is a good cause. We’ll need a good bit more, or something magic, to persuade those Ygg priests, though.