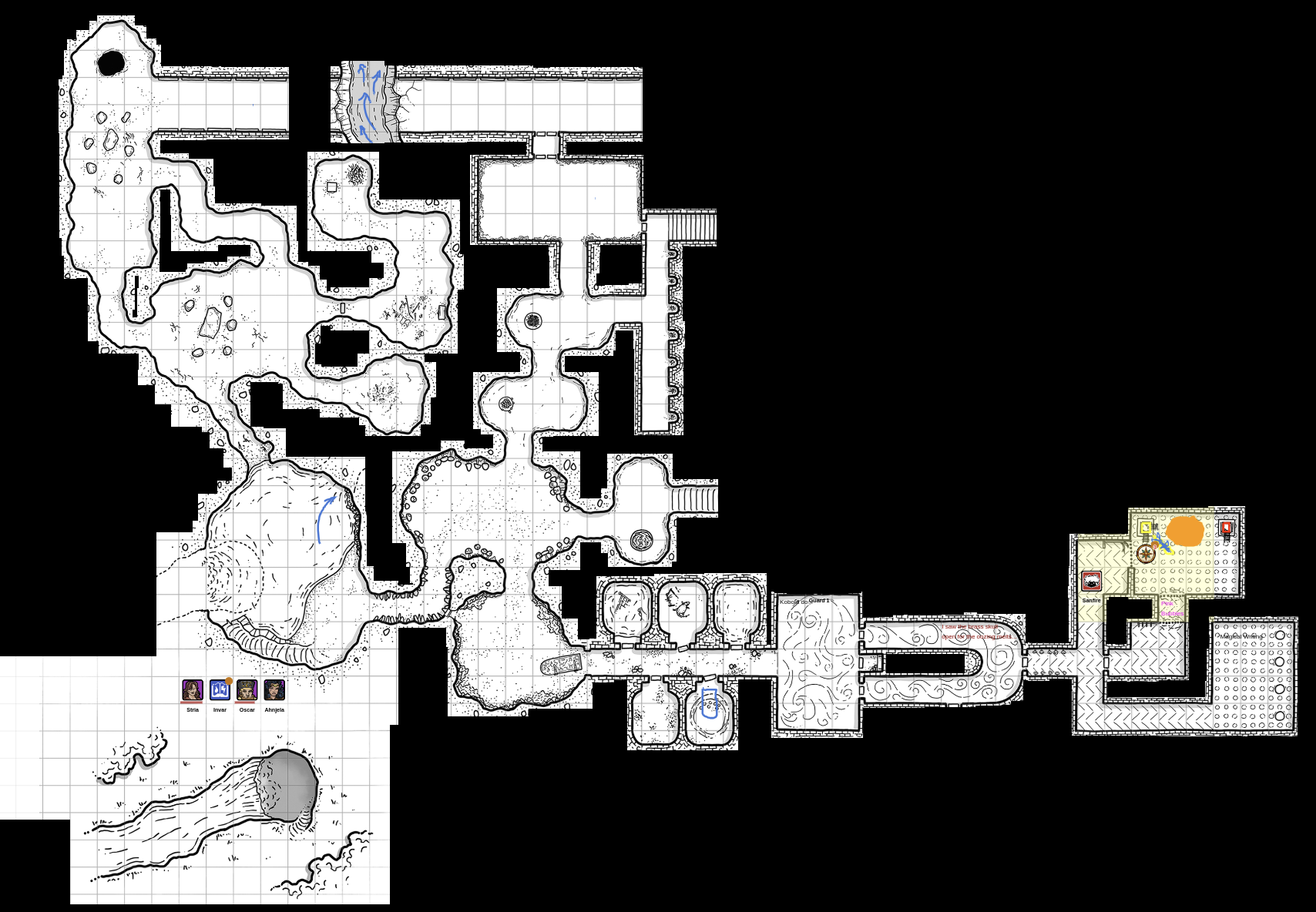 We argued for a little while about where to camp for the night, and eventually settled for a small room near the skeletons' room. It had a few rat holes, so we blocked most of them and Ahnjela set up deadfalls at the rest.

A very strange mushroom grew from the walls overnight, and Ahnjela caught a rat. While I studied the proper forms for invoking Denara’s healing power, Ahnjela… Skinned, cooked, and ate her rat. I truly don’t know what to say! I told her I had spare rations. I offered to sell her some! At a discount! But she wasn’t at all bothered to be eating rat.

Sometimes I wonder how I fell in with these people.

After that disgusting breakfast, we checked out a room nearby that had been filled with a pink slime trap previously. It was empty, with just pink slime residue, no sign of treasure.

After discussing what to do next, we decided to explore further behind the jelly skellies doors. Taking the turn south led to a room with four pedestals, each with ch ataotic writing upon them. After a brief examination we decided to leave them alone until Invar could memorize Read Magic, which would decipher the writing.

The north fork had a strange lever, sparkling wires, and a strangely musical porticullus. It hummed. I suggested we lower the lever using my mace as a weight in free fall, wrapped in a sack for insulation. Ahnjela offered to do the honors and drop the mace, as she was wearing leather armor and would be less conductive.

Alas all our preparations were in vain. When the lever dropped a mighty shock passed painfully through all of us as we were clustered tightly together. I wasn’t badly hurt, neither were Stria or Ahnjela, but our newest companion, the wizard Invar, was fried to a crisp, and this time we could not revive him. He was a brave man, and intelligent, but sadly, not wise enough to step away from a lightning storm. Of course neither was I. I was, however, hardy enough to withstand the consequences.

Oddly, a few minutes later a halfling crawled out from under Invar’s robes. He didn’t remember his name, and seemed confused, so I dubbed him Sparky temporarily. Perhaps wizards magically revert to their childhood when slain? I confess I did not understand these events, and for reasons that shall become clear in a moment, I am quite sure Invar is dead.

With the lever in the down position and exploded, the porticullus could be lifted without danger, and we did so. I instructed Sparky to bring us something to brace the gate open with. He brought us Invar’s body. I was shocked at the callousness with which Sparky treated the remains, but perhaps this is some strange wizard thing where the old body is discarded in favor of the new? At any rate, Invar’s body did a superb job of holding up the porticullus for us. Thank you for your final service, Invar. It was not, I think, what you expected. But it was well done even so.

Beyond the porticullus lay another room with three tanks, filled with a jelly like substance. One yellow, one orange, one red. The yellow tank had a body in a robe floating upside down within it. The red tank had some sort of cage suspended over it. To the south were two more porticulli, along with a shimmering blue force field filled with floating pink spheres.

We were just about to leave when Sparky noticed something shiny around the dead body’s neck. (The one in the tank, not Invar). We fished the body out carefully. He had a black disc amulet and a perl choker necklace. The latter looked to be worth a good thousand gold.

Sparky couldn’t leave well enough alone and splashed some of the liquid from the orange tank on his arm. It was bubbling like some kind of alchemical reaction or perhaps halfling soup. Fearing the worst, I rushed to his side and dragged him away from the spill, calling upon my goddess to heal his wounds and promising to go over the charges later. He rebuffed my healing at that point and refused to pay. Denara heard his Words of Welching and withdrew her healing grace from him and offered it to Stria instead. I made a note to negotiate payment from Sparky before administering any further healing.

Probably best to wait for when he is begging and pleading for his life and crying out from the pain. The goddess curses those who welch.

We went back around and through the melting skull door, which we guessed (correctly) led to the other side of the porticulli. A system of control levers were here, still humming with power. I surmised they would operate the claw hanging above the tanks, selecting which tank and raising or lowering the claw to dip things into the tanks and remove them. It was almost like some of the demented games of chance I once played. Each lever had a symbol, reading from left to right: Lightning, plus, portal, capsule.

We paused there to consider our next move.

Upon reflection, the answer comes to me: Invar was really two halfings standing upon one another’s shoulders all along! This explains everything!

Having retreated to a safer area of the Grotto, we debated where to camp. Outside risked unknown monsters. In the Grotto risked things dropping on our heads from the ceiling. We eventually decided on barricading ourselves in a small defensible room. But first Oscar wanted to check out another room that had, and possibly still had, an acid spewing gelatinous thing. I listened at the door, but there was nothing in the room. Ahnjela and Invar retreated down the hallway anyway. Oscar eased the door open, but there was, as I said, nothing in the room. Just dried pink slime. So we went to our chosen room and settled down for the night. During my watch, a strange green mushroom sprouted from the wall and beckoned. No way in any hells was I touching it. Between the giant bugs and the beckoning flora around this place, it’s seriously creepy. I should go back to the city. Maybe nobody is looking for me anymore, and I won’t get hung on sight. It was only a few murders.

In the morning, I told everyone about the mushroom, which was still on the wall, if wilted. Ahnjela had caught a rat in a trap overnight, and cooked it for breakfast. I’ll take nice civilized rations, thanks. We decided to explore some more past where the robes were hanging. Everyone wore a robe, and nothing dropped on our heads this time. We checked west, where there was ominous sparking. A lever, some frayed cables sparking lightning, and a portcullis. Beyond that, it looked like tanks of ooze. One had a man hanging upside down in yellow ooze. We walked east, and there was a room with red polka dot floors with four silver cylinders. Invar couldn’t read the magic writing on them, so we left them alone.

We went back west, and debated the best way to push the lever down. Ahnjela finally did it, by holding a sack with Oscar’s mace in it, and just dropping the sack on the lever. Worked like a charm, and shut off the lightning. After it exploded and shocked us all. Invar was shocked to death, his charred body falling to the floor. In the aftermath, we noticed a halfling get up from a corner. Must have been hiding before. Sneaky little bastards, halflings. Dimly remember him as a new member that promptly wandered off instead of joining a group. Pretty sure he robbed Invar’s corpse when we weren’t looking, because the spell book wasn’t there when I looked, hoping to grab it for one of our other mages. The halfling didn’t remember his name at first, so Oscar called him Sparky. Oscar, Ahnjela and I lifted the portcullis, and Oscar told Sparky to find something to prop it up with. He chose Invar’s body. Cold, on top of sneaky. Or lazy. He did keep complaining about doing things with the party without getting paid. As if anyone gets paid on the spot while exploring a dungeon.

Wandering around the tank room showed three tanks. One yellow with the man in it. One orange with nothing in it, but looking squished. And one red with a skull at the bottom, with a case suspended by a chain above the tank. On the opposite side of the room were two more portcullises, glowing blue, with pink bubbles bouncing around in between. Pink in a dungeon is never a good sign. We checked the room in the middle, but it was empty. There were four levers with symbols on them, that would probably do something to the portcullises and bubbles. We weren’t dumb enough to test them.

Back in the tank room, We pulled the man out of the yellow tank. He had a disk medallion around his neck along with a choker that Oscar said would sell for a lot. He also had a key in his pocket. Maybe we can get in the door with the fist on it in the hallway now. Before we could try that, the halfling, who now said his name was Sanfire Wetkettle, managed to crash the orange tank down on top of himself while trying an experiment to see if the yellow ooze interacted with the orange ooze. Well, the orange ooze certainly reacted with him. His hands and arms started to blister. Oscar dragged him out of the ooze and offered to heal him. Sanfire bickered with him about paying for it because he hadn’t paid for anything he’d done so far. I don’t think the recruiters adequately explained how adventuring works to this guy. Oscar agreed the halfling could pay later, and said he believed his goddess would let him heal more than one person this time. Ahnjela was nowhere around, so I volunteered and happily donated my two gold to Oscar’s goddess. We’ll have to come back to this area when we have a mage who can read the magic symbols so we know what the levers and cylinders do.