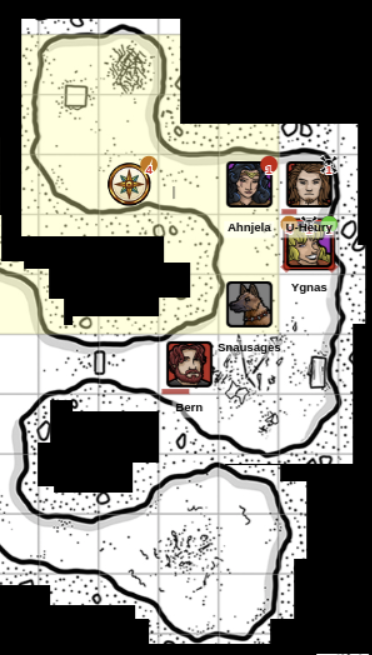 I was itching to try out my new trained wardog Snausages. Got him from Feverborne when I mentioned buying some wardogs, he figured three were better than two and he ain’t wrong. Sanfire mentioned he figured out the riddle of the mystery box, and told me the answer… didn’t make me promise not to go get it first. His mistake. Since the Gray Company had been pestering us to change our name, we talked it over and decided we should become the The Glorious Blades.

Ygnas, u-Heury, Ahnjela, Snausages and I went out to the Grotto. Along the way we met a weird, boar-headed creature that nearly froze Ahnjela in her tracks. She shook it off, but it was big and angry. As our first official act, the Glorious Blades ran away.

At the Grotto, we met with the trogolodytes. The old leader was gone and one of his subordinates was in charge. He took a little convincing and wanted to see Oscar, but we were able to remind him that we were friends of “the smart one” and we had an answer that would open their box. And we did! The box opened up for the correct password from Sanfire’s research. It contained 1200gp, a potion, a malachite bracelet (500gp), a jewelry box (200gp), and 5 iridescent arrows.

Our agreement with the trogolodytes was to split the treasure evenly. We took the jewelry box and the arrows, they took the potion and the bracelet. Their leader promptly drank the potion (I egged him on a bit), and it turned out to be poison! The leader of the trogolodytes fell dead at our feet.

The remaining two immediately attacked, but we had an excellent defensive position. u-Heury took the hits and the trogolodyte fell to missile fire and a few gnawing bites from Snausages. u-Heury was badly wounded from the one he has faced, and though Ygnas prayed to Zuul, Zuul was not answering.

We knew there was at least one more in the room, but he was either hiding or had gone for help. I lit a torch and set up a guard on the door and spiked it closed while u-Heury took up a position for missile fire, hoping to stay out of danger. Ygnas and Ahnjela quickly gathered the coins and searched the bodies for anything nice.

Sadly the danger was already inside the room, as two more trogolodytes appeared from the darkness and attacked, one on me and one on u-Heury. I sent Snausages to help u-Heury, figuring I could take one myself, but instead of attacking it kicked out the torch I had left in the ground near the door. I ran blindly towards the light from Ygnas' torch, luckily missing the one Snausages was fighting, and put my back to the wall where I would be relatively safe. They were slicing up Snausages pretty bad, but I whittled the first trogolodyte down pretty fast with my sword and axe.

The last fish-man managed to put Snausages down before I got there, and I had my share of cuts and scratches from the fight. We managed to bandage Snausage’s wounds and get him back on his feet, though he was badly hurt still, and walked with a noticeable limp.

We took a few minutes to rest, pick up the coin from the box, and search the bodies of the fish-men. u-Heury mentioned trying to bottle some of their stench-slime into a bottle and using it as a weapon. That would be perfect for Feverborne, he has some old soldier’s trick to ignore the stench.