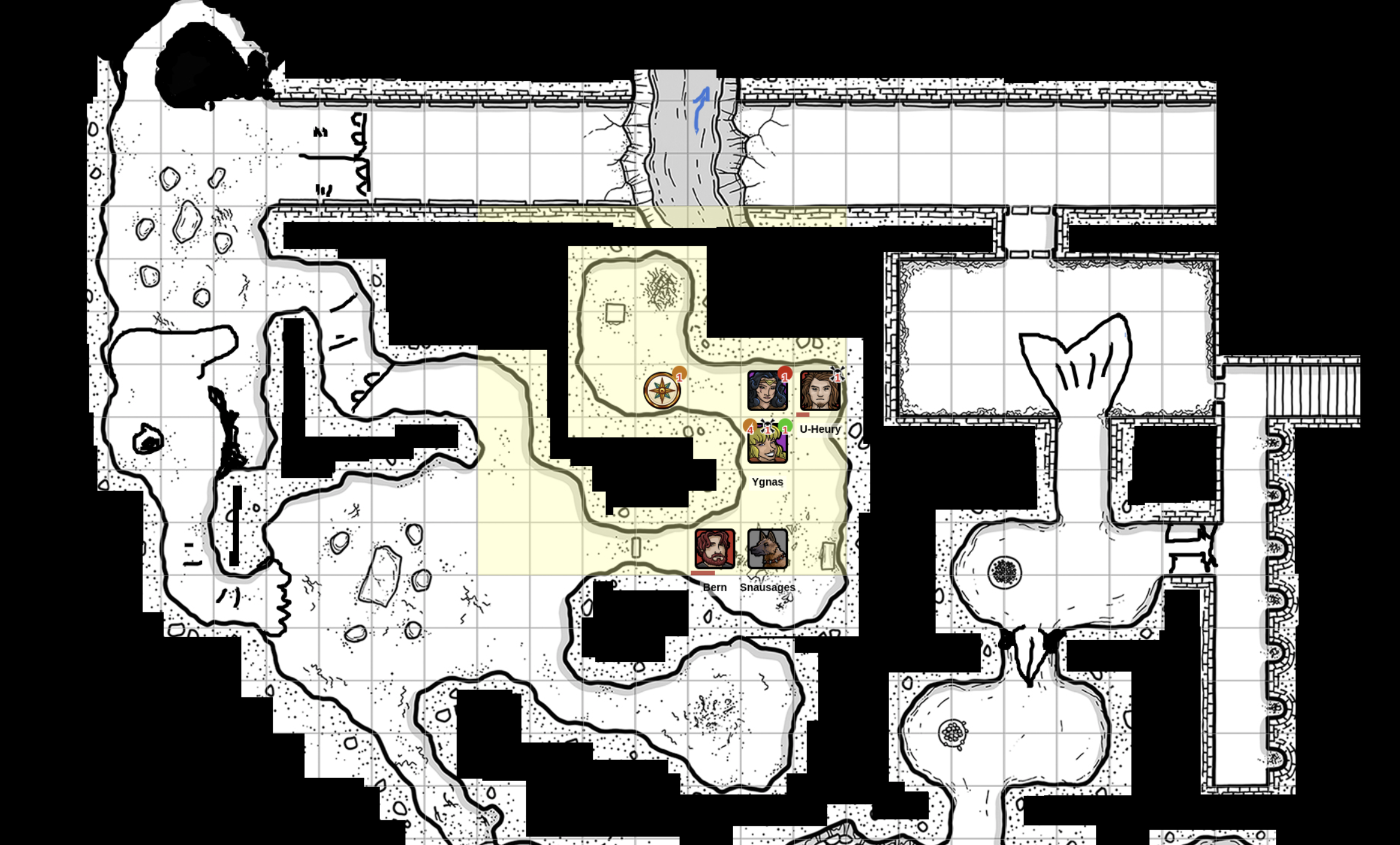 Once we finished picking up the treasure from the box, we took the time to search the bodies of the dead trogolodytes and the rest of their throne room. They were keepin’ skulls of their dead in a display case, complete with little labels. We took four of those. There was a snakeskin map and some blank snakeskin parchments. And, there was a short sword with jagged, serrated edges hidden in the cushion of a trashed sofa of some kind. (Are the trogolodytes fishy frat boys or something?) I claimed the sword, suspecting it was magical and knowing u-Heury wouldn’t want anything to do with it, Ygnas couldn’t touch it, and Ahnjela had a magic sword already. We also found a little more loose coin.

Then we headed back to town. Muirrion wasn’t in, despite bringing pastries. I ate them, but got sick after four. Snausages turned up in his nose at the rest. Smart dog. And speaking of, I left him with Feverborne to heal up, and took Left instead.

Retep was interested in the skulls, but only to grind into bone meal. We kept the nametags. I tried to talk him into a better price for the malachite bracelet and jewelry box, but had no luck; he said he found some sort of flaw in the bracelet and would only pay 350gp for it, rather than the 500gp he offered before. Just another reason to hate civilization.

We took the stuff to the magician in the morning. Seems the butler, Rheingold, took quite a shine to Ahnjela and let us right in. The short sword turned out to be magic, which is nice. Something to keep in my off hand maybe, or just switch to the shorter sword with my main hand all the time. We’ll see. It has all the jagged edges and stuff, I want to learn what this thing does, how to use it properly. Nothing else turned out to be magical, though. That was disappointing, so I went straight to the tavern spent the night gambling. Lost quite a bit of gold in the process, but I had a plan to win it back, and I put up the jewelry box for temporary stakes. That … made it worse. But at least I didn’t owe anyone outside the Glorious Blades any money.

On second thought, at least two of those Blades are assassins, and they were both being very, very attentive over the next few nights, so I had better start paying off that debt fast.

Muirrion did mention that Vortis, at the Temple of the Seven Stars, knows trogolodyte. We could stop in and ask if we ground up the skulls of their most famous warriors. Or more likely, to translate the map we found.

We started putting together another expedition to the grotto. I paid for a town crier to announce the hiring call, counting that towards my debt. I had two plans really – one was to fetch back the magic puzzle box. It’s heavy, but might be worth something, especially if the magic resets when the box is closed. The other plan was to make another go at the gibbering mouther. My share of that goblet would help with the debt. On the other hand, Oscar was muttering something about a spell that would stop it from gibbering. Maybe I should let him handle it and focus my explorations elsewhere.

We hired a torchbearer and 3 men at arms who will fight and possibly help carry back the magic box. Probably we’ll do some exploring first and grab the box on the way out.

Ygnas returned with Bern, Ahnjela, and u-Heury from the latest trip into the Grotto. She told a tale about them solving the puzzle box in the troglodyte den, a massive amount of treasure, and the troglodytes attacking them after the chief killed himself drinking the bottle of poison. They searched the den and found a chest of skulls and snakeskin scrolls, one of which had a map, a jagged sword, and more coin. Ygnas was shaken from the breaking of her holy symbol and the loss of her god’s favor. She headed out somewhere to meet a secret follower of Zuul with a hidden shrine that she could pray at and get back in Zuul’s good graces.

Being bored and having nothing else to entertain myself with, I tagged along with the others’ errands after Ygnas left on her mission. They tried to sell the skulls and scrolls to Retep, who wasn’t particularly interested. Bern, oddly, tried to haggle with Retep over the bracelet and jewelry box, and got a lowball offer. We went to the magician to see if anything they found was magic. The butler fell all over Ahnjela. It got us in, where he was otherwise going to turn us away, but he was practically drooling. It was creepy. The only thing of the lot that was magic was the jagged sword Bern had claimed. Impractical thing. You’re as like to cut yourself as your enemies, not being able to sheath it. We went to the goldsmith, who was only interested in the bracelet, and gave them a fair offer.

Bern immediately vanished in search of a game. He’s never shown an interest in gambling before. He’s always been one of the more financially responsible of the group. Maybe the stress is getting to him. The next morning, he sheepishly confessed to gambling away the jewelry box. Ahnjela was livid. It wasn’t my loot, but I warned him that touching party loot again, I’d cut his fingers off. He seemed contrite, but he continued to behave oddly, wanting to wager on things around us and such. Ahnjela and I contrived to keep watch on Bern at night while we remained in town waiting for the kid to recover from his wounds. I took first watch, and settled myself in Bern’s room without a by your leave. He was surprised, but didn’t protest. He wanted to dice, so I agreed. I don’t have a problem with him gambling with party members, and I’ll go along with whatever wagers he wants to come up with, as long as he isn’t giving in to gambling away the group’s stuff with outsiders. Ahnjela took second watch, and settled herself with a dagger to Bern’s neck while he slept. Seems extreme, since he wasn’t resisting our presence in his room. I hope she didn’t stay like that all night, or she’ll get a cramp in her hand.

I tried to find chains, but there were none to be had in town. How do they restrain criminals? Maybe they just kill them. I was sad. I’m fond of chains. I settled for two coils of rope. Pretty sure Ahnjela and I can figure out how to hogtie Bern, should we need to, in a way that negates his strength. And tying people up is fun. We kept a close eye on Bern as we were out the next day, making sure he didn’t sneak off. I spent another watch in Bern’s room that night. He’s oddly cooperative. I’m not sure I trust it, but we had a fairly pleasant time. Ahnjela came in for her turn, and again sat with the dagger to Bern’s throat as he slept. I apparently haven’t had sufficient training to be bloodthirsty enough. Or she’s still just really pissed. The next morning, the kid decided he was sick of waiting to heal naturally, and paid the exorbitant prices the Ygg priests charge. Bern paid for a cryer to announce that we were hiring, saying he was paying off his debt. We made the kid choose from the lot, since the rest of us have no love of hirelings. He picked a torchbearer and three men at arms. I’m happy I don’t have to hold a damned torch. So, we’re all set to head out. We just need to decide where we’re heading to.