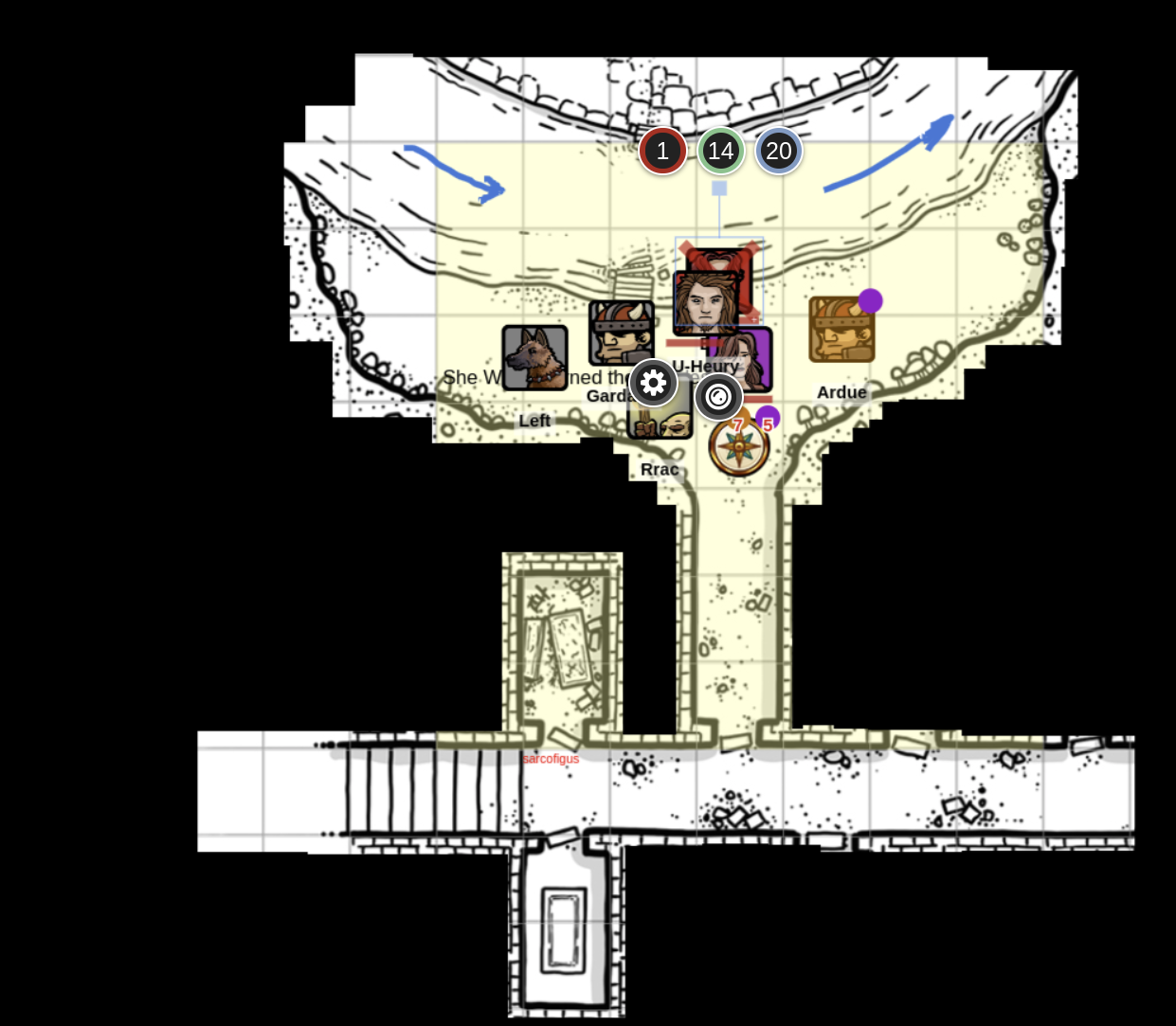 When I woke up the next morning, the weird barbed sword was gone. We looked and couldn’t find it anywhere. Weird.

We took our two mules, 3 fighting men and a torchbearer. Well. Lantern bearer since I paid for a lantern. Feeling guilty about that damned box for some reason. And went back to the grotto after the magic box, in case it was worth something, whether still magical or just as a curiousity. We got to the grotto without incident, though it rained, which raised water levels. Got the box (which did not re-close when the door was replaced) back up to the mules outside the grotto and rigged to carry. Then went back in to see what else we could find.

Exploring further down the passage with gelatin murals, we found a large chamber with statues and a set of double doors to the south. There were two large statues guarding the doors to the south, and three more on the north wall depicting three different colors of ooze – pink, green, and orange(?). Looking at the map, Stria thought the doors to the south would lead to the gibbering mouther, and it looked to me like she was right. We weren’t ready for that confrontation; Oscar has a spell to make it shut up, and we need that. So we went down the stairs where the undead mummy was. I was a bit nervous, since we didn’t have any trustworthy magic weapons; Stria said her silver dagger was magic but she hadn’t ever used it before. And the mummy needed magic. So, this was risky. But we did have three men with us. So down we went.

The doors to the south had an incription: “Final Dissolution Awaits Those Who Plead”.

Down the stairs, the first north room was just a trap that would collapse and kill you. u-Heury poked it with a pole, and it crumbled further. The door to the south had the mummy. (No body, otherwise undisturbed). A little further down, the next north door led into an open area with a rushing river, and what might once have been a bridge to an artificial island, and some strange mushrooms growing on the walls. Tolmyr took a 5 gold bribe to eat one and said he could see in the dark. I tried one too, and it worked for me. u-Heury got blurry vision, but Stria could see in the dark.

The pillars on the bridge had the inscription “She Who Adored the Faceless One”.

We were here to explore, so we rigged a rope bridge and I tied myself to the rope to cross. The small island held three sacrophagi, each with a small coffer, probably holding treasure of some kind. Above each sarcophagi a cold set of eyes hovered, and the center shape had a third eye.

The others were preparing to cross behind me when I heard an ancient female voice ask me what I was doing there. I tried to make conversation so the others could climb across, but she wasn’t having any of it. I swung the pole I had used to help me across at her, but missed. She didn’t, and her touch turned my arm to some sort of black goo. The pain was horrific, and a moment later the black sword of one of her minions struck me, and I lost consciousness…

By the time we headed out, Bern seemed back to normal. We noticed the jagged sword was missing. Coincidence? I bet not. We made it safely to the grotto, although through a terrible storm. Ygnas' praying may be working out for her. We left one of the henchmen with the mules. The rest of us waded through the water to get to the troglodyte den. The sword hadn’t materialized here. I wonder where it went. The box did not go back together, and appeared to no longer have magic. Maybe we can still get something for it. Bern took one end of the rig to carry the box out, and the two henchmen the other. Which they promptly dropped in the water. The kid and Bern ate moss and dove into the water to retrieve the box, while I eyed the henchmen and fingered my dagger, rethinking the need for cannon fodder if they’re going to be so incompetent. Box retrieved, and safely out with the mules waiting for transport.

We decided to explore some more. We set out down the wide hallway to the northeast. It turned at a corner with pink, green and blue ooze statues in various forms. The blue one had tentacles. The corner ended at double doors flanked by two ten foot skeleton statues. I immediately warned everyone that this was probably the other end of the big room with the obsidian altar that the gibbering mouther was in, because those same statues were in that room. It was tempting to try for the chalice, but we opted to wait for Oscar and his silence spell, since blocking ears with wax hadn’t been a complete solution.

We went down the stairs back to the crypt area. The first room collapsed when the kid poked at it with a pole. The mummy was gone. I hope it didn’t get back up and wander off. I had enough of it last time. There were a few more rooms, and a middle door that went to a hallway sounding of running water. The kid wanted to clear the hallway first, so we went there. We could see what looked like it used to be a bridge, but was now just a dock. There was an island across a river. And weird antler black mushrooms. One of the henchmen offered to eat one for 5 gold. The kid took him up on it. The henchmen said he could see in the dark. The kid tried it, and it just made his vision blurry. Then we heard music, and we closed the lantern. We could hear voices, and footsteps, and music. It sounded like a parade passing outside in the corridor. Bern and I tried the mushrooms, and we could see in the dark as well.

It took several tries, but I got a rope over the other island side. We tied it on our side, and we had a rope bridge to get across. Bern went over first. As he stepped onto the island, we heard him talking to a female. Then he swung a pole. I started crossing. Bern fell, one of his arms black. I caught a glimpse of a horrible undead female figure dripping ooze, and two spiky shadow figures. I grabbed Bern and dragged us both back into the water. The kid jumped in and dragged us back to shore. No idea if Bern is alive or dead. If he’s dead, maybe there’s something in the remaining crypt area that would be worth enough to the Ygg priests to resurrect him. Or maybe we can pledge to do some service on behalf of the priests in exchange. I could offer to find and remove the person that hired the assassin that tried to kill the high priest.