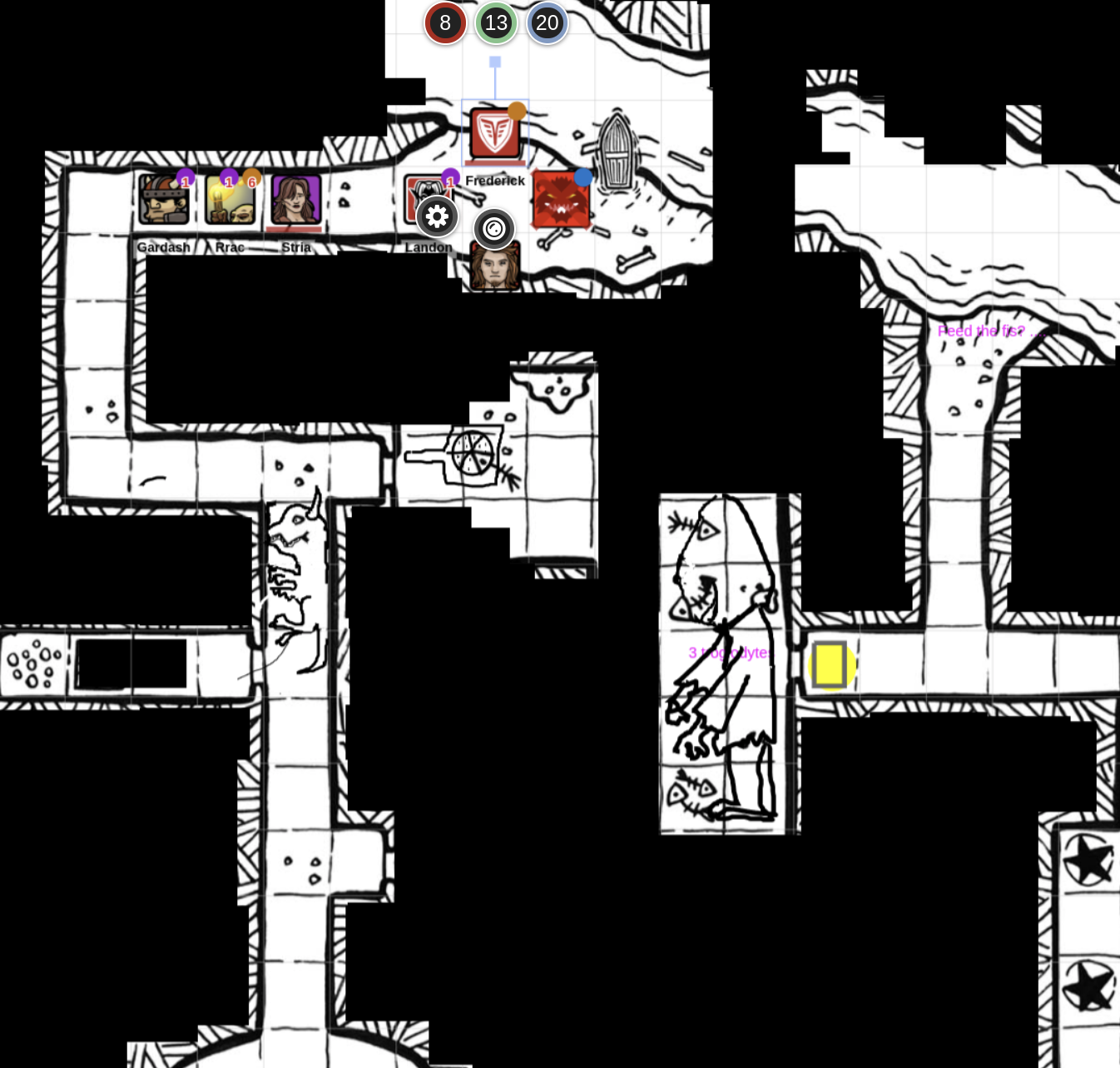 The big hairy ranger called Bern came back with his friends on a stretcher. They said he was dead, but when I asked the head priest of Ygg about him, the priest said Bern was just resting and seemed eager to wash his hands of the man. I don’t understand. Bern’s a bit gruff and uncouth, but his heart’s in exactly the right place, slightly left of the spine and between his ribs. So shouldn’t that make everything ok?

I joined his friends at the tavern with a glass of milk to ask what had happened, and they told me a harrowing tale of jellylike undead. Obviously I signed up; who wouldn’t want a taste of undying eternal jello? Jello is great!

So we headed out to this place called the Holy Oak. I kinda borrowed Oscar’s wagon and mules on the way. We’ll have them back in a jiffy filled to the brim with treasure so it won’t be a problem.

Descending into the hole in the Holy Oak, we found some grabby roots that Stria and u-Heury wanted to burn for some reason, so we did. Then we headed north while the fire raged behind us. Avoiding a few doors to the east that u-Heury said led to trogolodytes, and very carefully not stepping on a mysterious telarug (I’ve never heard of such a creature!), we found a short corridor filled with some kind of creepy, dangerous grass. Landon used his halberd to mow the swamp. Are all elfs so concerned with horticulture?

We came upon a small underground beach with a river flowing past, and a large pile of bones and trash, next to a small rowboat. Stria was just saying something about possible treasure in the pile when we were attacked from behind by these ghastly, ghoulish creatures. I have no idea what they might be!

I hung on to Bern and kept his head above water while the kid dragged us to shore. Bern wasn’t breathing. We hefted his body outside and slung it on a mule to bring to town. We found that Bern had money saved up, and I supplemented it to pay the Ygg priests to resurrect him. They say he’ll be ok, although his arm will never be the same, black ooze tainted as it is.

With Bern needing to rest up, we discussed what to do while resting at the tavern. A lad named Fred joined us. One of those prudish fanatical types. Seems a bit simple. But he has armor and can hopefully use that sword, so he’ll be useful cannon fodder.

The creepy oak tree was the destination of choice. It seemed the option with the least amount of things actively trying to kill us. I donated some of my oil flasks to the kid, who wanted to burn the thief roots. We left them burning (Ygnas would be so happy), and went north to skirt around the teleport rug. There was a wooden door with a tree sign on it to the left of the rug. North of that were two doors on the right, and one on the left. Landon opened the bottom door on the right, despite me telling him it was the backdoor to the troglodyte den. He closed it quickly, having confirmed that, yes, I do know what I’m talking about. Luckily, they didn’t come after us. Then Fred had to open the top right hand door to again confirm that I know what I’m talking about. They didn’t come after us then, either, so I count that as a win.

The door to the left had a pit and what appeared to be a pile of treasure on the other side. I climbed the wall to avoid the pit. But the treasure was an illusion. All that was there when I swiped was a black chess piece. It has to go to something in this blasted place, so we bagged it. The corridor to the north that led to the river was filled with weeds and dead bodies strangled in the weeds. Landon hacked at the weeds, and the kid poked at the dead bodies with a pole. They didn’t move. We got to the river and saw a partial body by a rowboat. Then the body started moving and attacked. The boys dispatched it easily, but not before I heard moving behind us. Guess the dead bodies aren’t as dead as they were pretending to be.