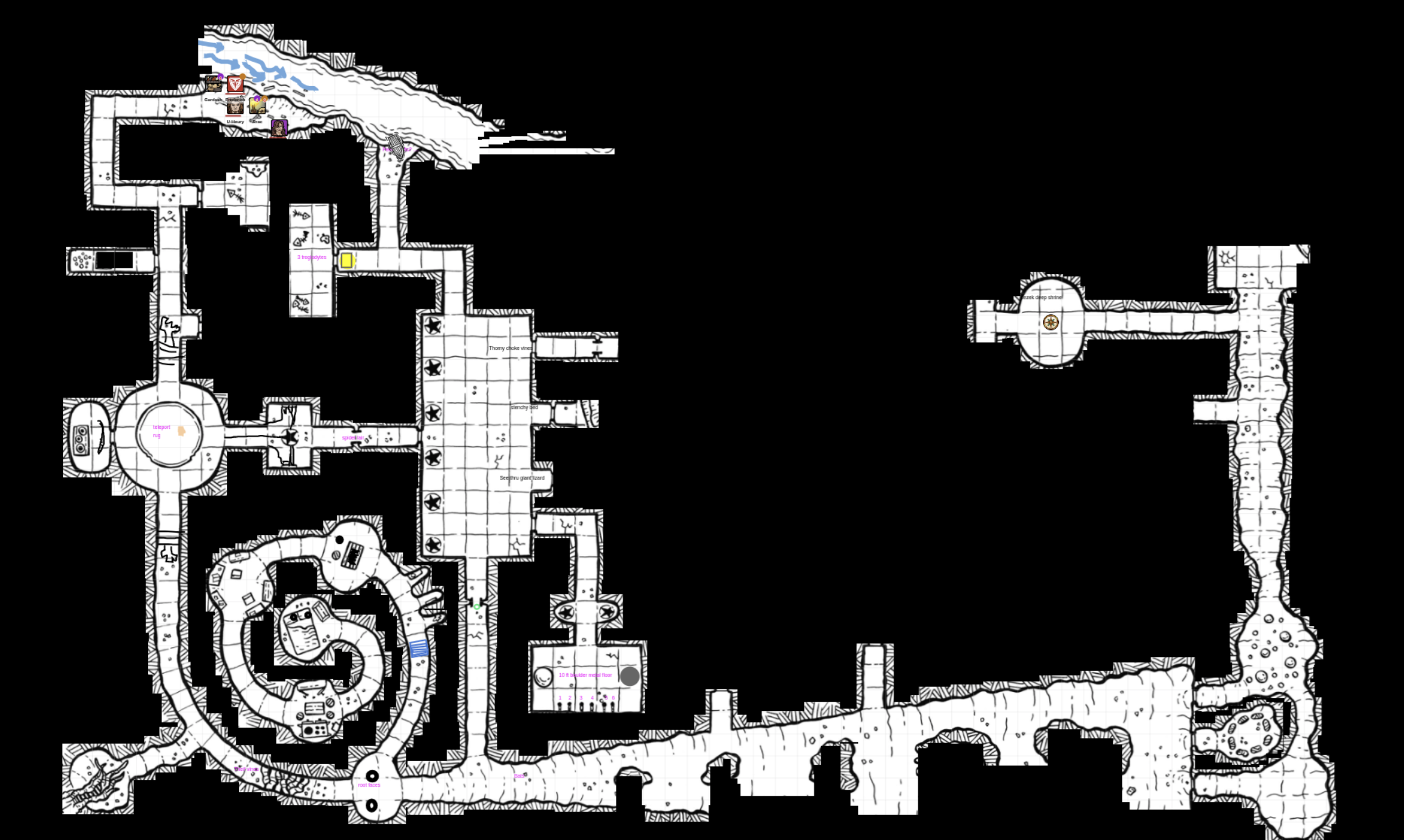 The ghouls came at us fast. Stria killed one with a headshot, and I landed a solid hit in return, but then everything seemed to go stiff and everyone started moving really fast. Their voices buzzed like flies! I kept trying to talk but no one listened, until somehow I fell into a boat and we sailed away from the ghouls. Everyone slowed down again once they were out of sight, but u-Heury was playing at being a statue, so I gave him a mousetache. I can play too!

We went back to the surface and rested overnight. Tolmyr was still there with Oscar’s mules and wagon. That’s good. I suppose I’ll have to mention to Oscar that I borrowed them if they get lost. I’m afraid he’ll make frowning faces at me if I have to do that.

Rather than try the ghouls again we went back to the room that u-Heury and Stria said had a tele… tele… teledoor rug. We weren’t supposed to touch the rug, but we did open a door facing west and found a small table with many jars. Each jar had a small person inside, apparently dead, and naked. I squeezed my eyes shut tight and made Stria look. I need to worry about my purity!

We didn’t find anything interesting until I opened the green winebottle, which turned out to have two sheets of paper inside the neck and smelled of vinegar. One of the sheets I couldn’t read. The other had a simple story about someone who went to the “Hall of Sleep” to ask about leylines, and was told about standing stones at Gorthstone. What this has to do with little people in jars I don’t know. But I thought maybe pouring some of the liquid in the green bottle into or on one of the little people might wake them up. Nothing happened though. I resolved to burn them at the stake as soon as I could find the right cut of beef for someone their size.

Then we all decided to hop on the rug at once. It took us somewhere else with a lot of bats and three doors; one lion, one bull, and I forget one in the middle. After discovering that the bats in the area reacted poorly to sound, we went into the one in the middle. It had a small room with a strange circle of stone benches, and it was very, very quiet. We couldn’t hear each other speak! I couldn’t hear myself think, even. But that’s pretty normal. The only thing we found was an odd hat with “Property of Henry Slippums” sewn into the silk lining. Stria mentioned researching the hat later. Why would we want to know about hats?

The other two doors led to a connected set of rooms. The southern rooms had a dead iguana being eaten by glowing beatles. We snuck past them, being quiet and without carrying a light, and went north. A room with heavy stalag… mites? Yes, mighty tighty ceiling rocks. We snuck around the edges and didn’t find anything but another corridor heading north, this one ten feet wide and smelling of bovine excrement. Seemed likely we would find a bull somewhere this way. The walls in the corridor had these strange, deep holes, but I wasn’t about to stick my hand down one.

The far end of the corridor had a larger room with some sort of altar. We immediately backed off to secure our rear before a possible confrontation. Two westward corridors remained. The more northern one led to an oval room with the walls covered in slime. u-Heury donated a sack, and we cleaned off the walls to read:

“PRAY FOR THE BENEDICTION OF KEZEK. THE BLESSED MAY PASS THE FALL AND COME TO THE DEEP SHRINE”

I retreated behind the boys and got out my crossbow. Landon jumped in the river and disappeared. I shot the first undead thing in the head and it dropped. Fred hit the second one in the shoulder, then it got him and he froze up. The kid missed, and the henchmen killed it. The third one got the kid, and he froze up. We dispatched the third one, then I dove for the rowboat, telling the two henchmen to drag Fred and the kid into the boat as well. I paddled us down a little ways to tiny beach area on the other side of the trodlodyte den. I wasn’t sure about trying to explore further with the boat overloaded and my companions paralyzed. We dragged them out of the boat and waited for a long time before they both were back to normal.

The kid was all for going back and finishing the undead off, even though they almost killed us, or trying for the troglodytes, even though the last time we tackled those things in the Grotto, they almost killed us there. We settled for some nice tame exploring. We snuck through the serpent arch, hoping there were no more spiders. Fred whined about the hunter statute until I climbed up and confirmed that, yes, the sword was stone too. The tree door by the teleporting rug revealed a tiny room with just a table and lots of jars. Jars filled with dead tiny people. It was highly disturbing. Once Fred realized the tiny bodies were naked, he refused to look at them. Dead is ok. Naked is a problem? That boy has his priorities wrong. He shook one of the jars, and the body didn’t come to or anything. Looking at it being shaken like that made me ill. Fred uncorked the bottle on the table, and it smelled like vinegar. There were parchment pages rolled up in there. One of them I could read. It was a mage detailing how he went to the hall of sleep and found out that a ring of stones would let him go to the realm of the tiny people if he did a ritual. Apparently the ritual worked, and the bastard took specimens. He’s on my hit list.

Fred poured some of the liquid in the bottle in a jar, but the body stayed dead. He wanted to burn them, and I cautiously agreed that it would be nice to give the tiny people a proper funeral pyre. But then he started talking about toothpicks to burn them at the stake as witches. The kid was outside the room muttering about magic and approving. What did the tiny people do to deserve that kind of disrespect? The wizard took them from their realm and murdered them. I should have left those two to the undead instead of saving them. Of us all, the former prostitute who kills people for a living has more conscience than them. I at least don’t disrespect the dead once they are dead.

Being out of exploring options that didn’t involve trekking through bat infested tunnels, we opted to all step on the teleport rug. It brought us to a cavern with three doors. One had a picture of a bull, the middle had a picture of a jester, and the last one had a picture of a lion. We could hear bats everywhere. I listened at the bull door, and heard a bull snorting and stamping on the other side of the door. The kid heard giggling behind the jester door. We discussed what we heard, and were attacked by bats. The sound also made something scream to the west. The kid said to turn the lantern out and drop to the ground, which we did, and the bats went away. We quietly went through the jester door. I shut the door behind us, and all sound went away. Couldn’t even hear myself breathing. I opened the door again, and we could hear. We searched the room, but other than a ring of stone benches, the only thing I found was a hat that said it belonged to Henry Slippums. I wonder if that’s the mage. Or if he knows the mage. I’ll find him and make him talk.

We next went through the lion door. Luckily, there wasn’t a lion behind it. There was a giant dead lizard being eaten by giant glowing beetles. Yay, more giant bugs. The bugs didn’t like the lantern, so we shut it and hugged the wall to get by them to the corridor to the west. The corridor met up with the bull room, which was full of stalagmites that we had to maneuver around. No bull, but we could smell bull shit, so there is one somewhere. The corridor continued on, filled with random holes in the walls. That’s not ominous at all. There were two manmade hallways to the left, and the corridor opened up into a cave. With piles of bull shit. Did I glimpse an altar? I hope I didn’t.

We decided to check out the hallways first, to make sure nothing would come behind us when we went into the cave. The top hallway went to a round room filled with slimy algae, and another hallway beyond. We could see writing on the walls of the little room, so we wiped off the slime. Something about praying to Kezec, to pass a fall and get to a deep shrine. I wonder what Kezec is. I hope it isn’t as awful a thing as the Faceless One in the Grotto. There is some seriously messed up shit in this part of the world.