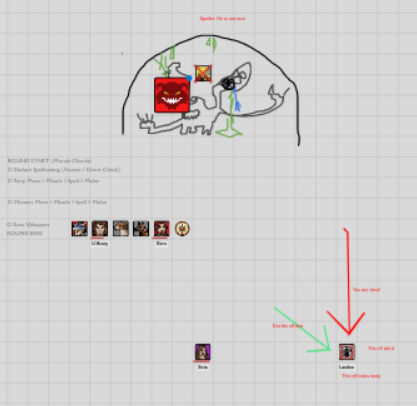 Oscar sent word that he had found a sword that might work well for me. Apparently it has some history with the White League, a group of rangers dedicated to opposing … things. It’s a little unclear exactly what things. This one is supposed to oppose scales, even though we found it in the barrow of a dead lizard king, and the blade itself is covered in serpent markings. When I drew it to test the balance, it spoke to me, briefly, and asked if I was willing to oppose scales. I said sure, I’m all about the fur. My pappy was a werewolf, after all, I have no truck with scaley things. I think I can get along with this sword.

Apparently it has two brothers, one opposing flesh, another opposing … a different type of scale? But no ideas on how to find either one, so we’ll just have to see what comes up.

Come to think of it, do swords normally talk? That seems a little odd, but no one else mentioned anything unusual.

We were headed to the barrow marked on the kid’s treasure map. He said he got it from a frog? Weird. Anyways, we took a man-at-arms and a torchbearer, and it’s kind of out of the way, so the kid and I had a little friendly foraging competition. It got a bit less friendly when he kept winning. He must be cheating somehow but I couldn’t figure out how.

Finally with food running low, we decided to try hunting instead. We felled a nice juicy haunch of venison right outside of a cave where some creepy thing with eyes on tentacles lived. We fought the thing off, but not before it manged to poison me. One of the kid’s poltices saved me. Maybe he knows what he is doing in the woods after all.

We dragged the carcass back to camp and went looking for Stria and Landon. We found them hiding under rocks and cursing at them for some reason, but got them back to camp safely and decided to maybe try going after the tentacle creature. Perhaps it has treasure, and perhaps the cave it lives in is the barrow we seek.

When we put thought to action, it turned out the creature is very difficult to hit with missile weapons and no one wants to get within range of the poisonous maw.