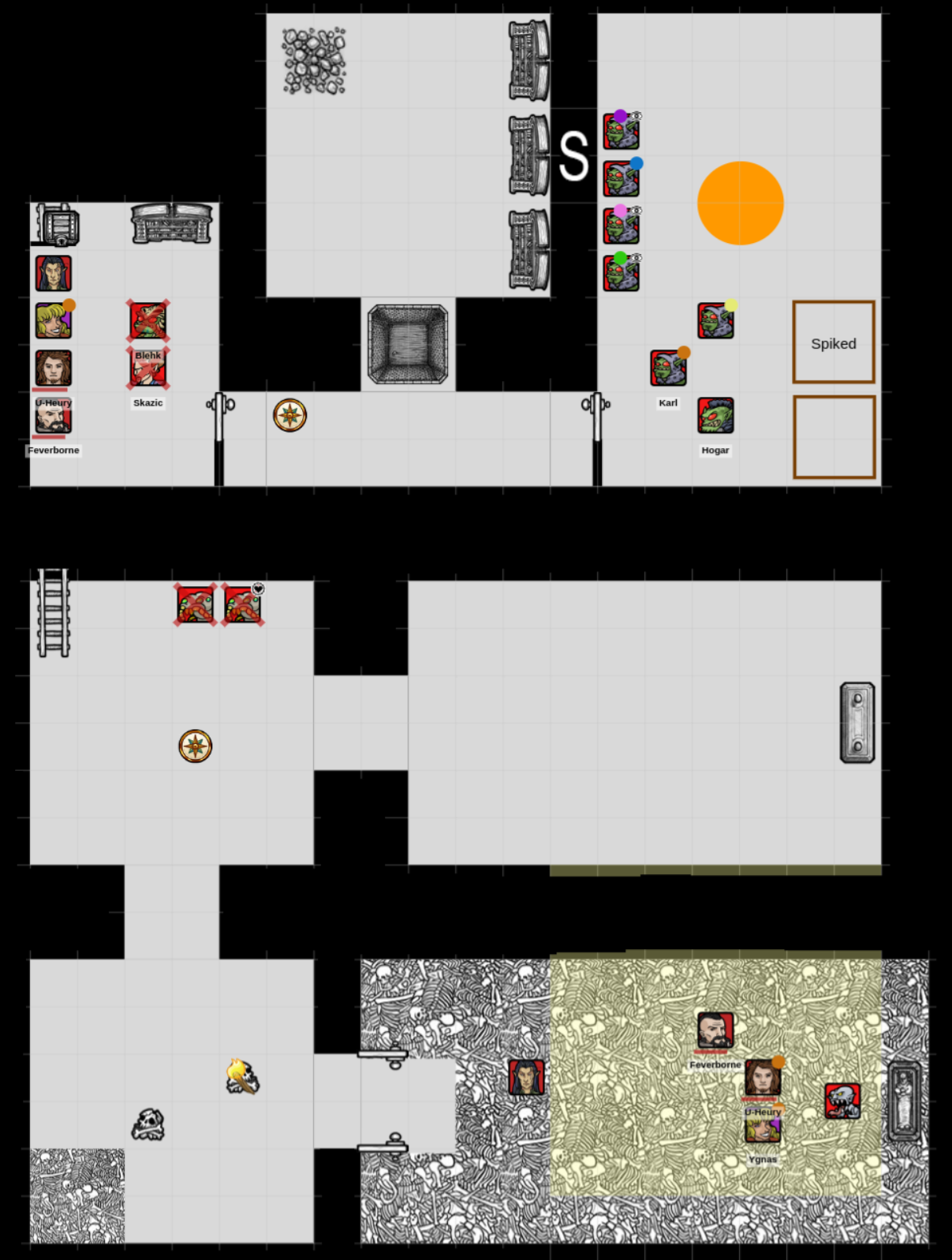 As it turned out, I found the trap mecvhanism myself, and got a mouthful of poison gas in the process. The kid was busy having a barbarian staring contest with a spirit wolf. Seems he asked it for a gift when it offered a question answered. Wolf spirits are prickly things. It especially did not appreciate being asked to bless Snausages. After he got that sorted out we demonstrated the trap mechanicism, and figured out a way to safely discharge the trap when opening the door. It involved using the dead giant centipede heads. Don’t ask.

Turns out the goblins above had betrayed us by blocking the trapdoor with a chest full of rocks. We took a day of rest, burned and broke apart the trapdoor, moved the chest to ensure our escape, but stopped short at killing the goblins, figuring it would be safer to face the ghost first and the goblins later (possibly after resting, especially with Ygnas available to heal us faster than normal).

While we were up there I eyed the Drow elf’s armor again. We were about to face the ghost, and we would need every bit of help we could get. Landon hadn’t memorized Detect Magic, so we diced for the elven armor. I won the roll after u-Heury consulted with his spirit guides and decided he didn’t want it since elves are unclean to his animal spirit gods or something. With the armor on I felt a lot more mobile. Landon will probably stab me in the back for it later, but hey, why would an elf want drow armor? Seems like an easy way to spark confusion to me.

Once we got the door open, the kid heard a voice from a ghostly barbarian named Humpty “Bloodskull” Dumpty. The ghost was only responding to the kid, not to the rest of us, even though we could hear it just fine. There was a lot of back and forth here as the kid tried to lure the ghost out of its room filled with the carpet of bloody skulls, and it tried to lure us in. It won, but only after u-Heury managed to clear a space of about 10’ square of the bones. u-Heury, Ygnas and I went in front, Landon taking up position at the back with his bow. The only thing we could see was the creature’s red eyes at first, and I’m hoping the Fae Blade’s compulsion to go after the biggest enemy isn’t TOO literal. Eyes on a ghost aren’t very big and I’m not too clear on the “enemy” part of the definition yet. But I’m hoping seeing those eyes is enough to keep me from “accidentally” running the kid through due to the sword’s strange compulsion.

I warned the kid about the sword. I told him it might get dicey. He didn’t think it was funny. I don’t really blame him.

Closer up, Dumpty Bloodskull looked more like a demented hobbit, only closer to human size. I guess we’ll find out the hard way if the sword discriminates between friend and foe, or if size is the only thing that matters. And I’m pretty sure we don’t have enough men to put Humpty back together again.

I wandered around between both areas, guarding. I’m getting better at not being lost in the fire on the torch, but it’s really hard. Our young barbarian was in the north room before the altar, doing some barbarian ritual. He did something right, because a cloud of smoke rose over the altar and he stared at the smoke for a really long time. In the south room, Feverborne was fiddling with the wolf head doors. He was awfully pleased with himself when he figured out the trap and how to disable it. Now we won’t die of gas poisoning at least.

Barbarian boy came back from his trance, disgruntled at what the spirit he saw in the smoke told him. He’s supposed to be a great leader of his tribe. Most people would be happy with that kind of prediction for their future. Not our kid. It ticked him off. Too boring. I’m fond of the kid, even if I absolutely hate the barrows he keeps getting us into. We heard a thump from the trap door. The goblins had blocked the trap door, trying to lock us down here. And the males were mad at me for killing one of them! We should have killed all the ungrateful bastards. Barbarian boy shoved and pushed and unblocked the trap door. Then he and Feverborne took the stones out of the chest that the goblins used to weigh it down with. They pulled the lightened chest back over the trap door, so if the goblins checked, it would look like we were still trapped. If they ignore the stones all over the room. They’re goblins, they’re dumb.

We rested, with me grumpy at our diminishing sources of firelight, and still paranoid about the invisible person. Feverborne snitched the drow armor and put it on. I didn’t tell him the armor was pretty, since men are touchy about being called pretty, but it was. Then we were set to tackle the wolf head doors. Barbarian boy, as usual, made things way more complicated than necessary, by rigging the left wolf head door with a rope. We all heard someone … or something … inside talking to him. It ignored the rest of us. Once open, the door kept closing, despite being propped open with piles of stones. Inside, from what we could see in our torchlight, the room was at least as huge as the north room. And full of bones. I mean full. There wasn’t any space that wasn’t piled high with bones. People. Animals. Giant bugs. I kept watch while the kid and Feverborne carted about 10 feet of bones out. For some reason, standing on bones freaked them both out. There was lots of back and forth between the kid and whatever was in the room, with the thing trying to taunt the kid into coming in and fighting him.

All we could see was red eyes. I wasn’t sure that moving the bones was a good idea. Whoever put this bastard in this tomb obviously wanted him to stay there. If he could get out, he would have. It’s possible that it was trapped in there with the bones of all its victims. It may be that moving some bones outside would break the hold and allow it to get out. But, eventually I got sick of the back and forth. The kid and Feverborne were squeamish about going into the room. I got annoyed at the lack of backbone. Haven’t checked, but I’m sure they both have the requisite male appendages. They were, in that instance, however, lacking any male courage said appendages usually convey. Whatever it is, it’s undead, and I need to see it before I can try to turn it. I walked all the way into the room, until I revealed what looked like a walking corpse. The menfolk were forced to follow me into the room. So there.