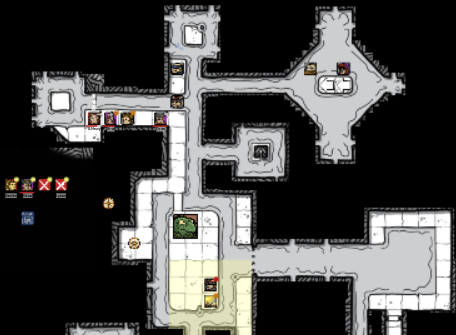 Our testing of the valve configurations proved fruitful. We rapidly discovered that turning both valves to the right (east) raised the porticullis leading to the shrine, which is located just south of the valve room, and turning the left valve up and the right valve right raises a dam that allows the shrine to drain. Within the shrine of a statue, along with writing.

If a hero you would be and see my foe’s filth, vermin and plague destroyed, grant me a weapon and I will grant you the means to see it through.

I recognized the statue as depicting a minor goddess of cleansing known as Closea, appropriate for a sewer in a way if you assume she was meant to be cleaning the place up. Stria prompted borrowed one of u-Heury’s spears and gave it to the statue. A drawer opened at the base, containing 2000 gp, two flasks of liquid, and a wrapped bundle. u-Heury grabbed the bundle and unwrapped it to find a very fancy sword, obviously magical, practically glowing. He dropped it immediately, of course. I caught the thing before it could fall into the muck, and was immediately caught up in a vision.

Closea offered me the use of the sword if I took up her worship and cleansed the sewers of the wererats. I was forced to decline, as my heart and soul both belong to Denara, but I was not without sympathy and vowed to find someone worthy of her cause and pass the sword along to them. Alas, neither Stria nor u-Huery were found worthy. Perhaps Feverborne, he is always muttering about clensing infusions and herbal teas.

The gold we divided up amongst the group, which made those three who had negotiated for half-shares quite happy, but also slowed us down. We resolved to return to the surface soon, to store the gold and find the sword a wielder, but hoped to resolve the question of how to proceed further down first. Exaustively searching the shrine revealed no more clues.

u-Huery wanted to investigate a feature of the northern room that looked odd to him, and found some sort of barrel or chest beneath the water. He “found” it by having Mahra step on it, and it broke. We didn’t realize what it was until a piece of it floated by later wth a gem stuck to it; Stria grabbed it and said it was worth 20gp. It must have been a barrel or chest full of gemstones. Oops. After diving into the muck (eww) u-Heury brought back one more small gemstone. u-Huery declared he would come back with a net and a ten foot pole to fish for gems. I figure it’s worth a try.

We returned to the valves, and my meticulous record keeping brought the favor of Denara upon ouer endeavor. I quickly determined that turning both valves to the left started the sewage draining in that same direction. It also attracted the attention of the rats, who watched us from just outside the range of our torches. Stria is convinced they are spying for the wererats, and she’s not wrong. We attempted, and failed, several strategams to outwit the rats, and eventually mounted our dwarf and elf on Mahra’s back so they could ride her into battle against the rat horde. The rats fled.

We learned that the west room was in fact draining, but the outflow matched the inflow so the whole maze remained flooded. Further examination of the valves revealed that turning left to face left and right to point right would raise a dam to block the west passage, allowing that chamber to drain. The rats did not return.

With the way downward revealed, we resolved to return to the surface and seek a proper sword wielder and make what other preparations seemed wise. I plan to try to close the way down before we leave, so we do not tip off the wererats more than we have already.