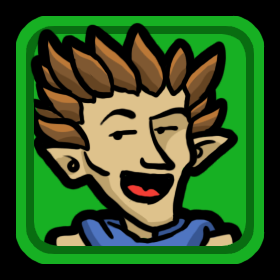 In an illustrious start to his career in Rookroost, Barron was betrayed by his guildmates and sold into slavery on his first day at work. Orientation is a bitch.

Elward Alden is his real name, but when he doesn’t trust people he gives out one of his many handles (he is currently using Barron). Raised a bastard love child of a human father and elf mother, he was always looked down upon in the elf community for being a half breed. Some where in his teens he decided to abandon the elf community entirely, tired of the ridicule. He ran away with his childhood friend, Leah another half elf never looking back. They formed a treasure hunting duo, stealing everything that wasn’t nailed down… and some things that were. While he would never admit it to anyone, he has never stolen from the poor or innocent that he is aware of.

Recently a group of guards (in another town besides Rookroost and Saltmarsh) got wind of their treasure hunting operation and tried to catch them red handed… being 2 steps ahead of the guards they gave away all their accumulated wealth and treasure to the townsfolk. Leaving them broke and watched by the guards, they fled town again to start over else where. Upon coming to Rookroost Elward learned of a thieves guild and set out to join as a means to improve his skills and ultimately make a butt load of gold.

Barron has a serious distrust for most of the world, especially elves, slavers, and authority figures. He is the more rash decision maker, sometimes letting anger cloud his judgement.

Barron originally carried a stuffed falcon in a cage strapped to his waist. The poor falcon has now suffered the indignity of having Animate Dead used to bring it back to life, complete with stitched on goblin hands, inverted wings, and a goblin-tooth mohawk. The bird now rides on a specially designed perch mounted on Pyro’s armor, wearing (when not in flight) a cloak made of white sailcloth. It has been thoroughly plucked and the original features replaced with goosedown from a pillow and glue.