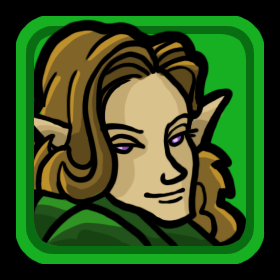 Leah is a ranger whose association with Barron keeps them both in a moral grey area. Her father was an elf, and her mother was a human mage who went insane. Having more elfish features physically (than Elward) she was less teased about being a half elf… but everyone talked behind her back about being the daughter of a crazed mage. She ran away with Elward to escape her past and became the smarter, more level headed half of the treasure hunting duo. She tend to prefer working in the shadows and at a distance, covering Elward with her bow. She has no issues with theft from people she deems unworthy of their riches (typically the rich and especially the mean spirited), or the dead. She was doing some recon on a possible mark the night of Elward’s kidnapping and blames herself for not having his back the one time he needed it. She had been waiting in Rookroost for news of his return, where she became acquainted with Kriselle at the Pearly Gates Inn. She joined the party when the group brought the cargo of the Sea Ghost into Rookroost.

Leah travels with a war dog named Pyro (AC: 6, HD 2+2, 14 hp, 1 bite attack for 2d4 damage). Pyro travels with an animated avian zombie perched on its back and has been trained to launch the bird into the air, as well as commands to attack and heel. Various additional commands, including fetch, guard, and desecrate have been attempted with some success.