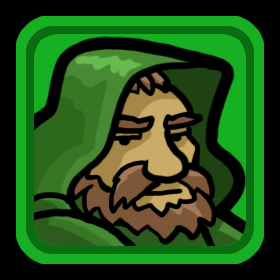 Pyrzival (A gnome fighter played by Brian) in the Evil Overlord campaign.

Pyrzival was born to two tutors to the royal household in the Great Kingdom. When he was young his parents took employment with the King of Nyrond to tutor his children. Pyrzival seemed destined to be a tutor to noble children as well, as he soaked up not only how to teach but also the information they were teaching – that of science, engineering, mathematics, and astronomy. One year, when he was just a very young adult, he was sent to the County of Urnst to scout out potential employment, and his group was attacked by a large group of Orcs. Several weeks later, he was rescued by the human paladin by the name of Lord Tiberium Else, the first of his name. Grateful to be rescued, he accepted an offer to tutor the Lords children and stay on at his manor. Determined not to be helpless in the face of violence, he decided to take advantage of being in the service of a Paladin with martial followers, and studied weapons with the master of arms. Years later, the old lord died and his son (already married), inherited and they had children. Pyrzival stayed on to tutor their children.

A few weeks after their only child, young Tiberium Else III turned twelve years old, more orcs again invaded the lands. Pyrzival offered to help some retainers guard the lords' wife and child while the lord and the rest of his retainers went to do battle with the orc horde. The lord and his knights were later found dead, and the orcs captured the keep where the peasants and non-combatants were sheltering. In the chaos, Pyrzival managed to escape with his charges, but discovered evidence of betrayal on the way. Instead of seeking help within the County of Urnst, where another betrayal could cost them everything, he took his charges to Rookroost where they would be safe from assassins until Tiberium grew old enough to claim his majority, his inheritance, and his revenge.

As Tiberium III comes of age, he finds a calling within his soul to the path of the paladin like his father before him, and Pyrzival, with three decades of weapons training but very little actual combat experience, decides to accompany him as he takes service with the church. The two would forge their path together.