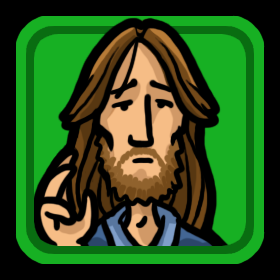 A monk from a distant land (Nyrond), Thic Duc walks the earth in search of impressionable individuals who can be brought to perceive the truth of the one true god. So far, he has successfully converted two people: Kriselle’s parents. He would desperately like to complete the set, and the two have spent many hours discussing philosophy, fungi, and religion while peacefully fishing for mushrooms. However, they both felt that there was more to the world than could be found living such a peaceful and sedate life, and now they travel the world in search of adventure, self-improvement, and wealth. To be donated to the poor, of course. Eventually.

His personal ambitions include wall-punching and experiencing every possible way of being knocked unconscious by traps. He would also like to remind the church of Pholtus on Oerth that Pholtus is the only true god, and all the others are impostors.

Due to a quirk in his native language of Nyrondese, in which the letter K does not exist, Thic Duc is sometimes spelled Thick Duck in common. Any resemblance to wide waterfowl is purely coincidental.

Due to a quirk in the Castle Greyhawk dungeons, Thic Duc was accidentally reincarnated in the body of a spiritual messenger of Pholtus. Shortly thereafter, he was restored from backup and replaced himself with an upgraded version.