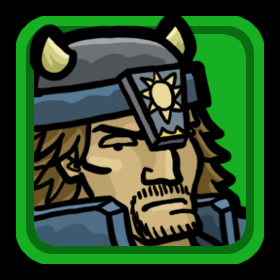 Tiberium Elyse III (A paladin played by Chris) in the Evil Overlord campaign.

Tiberium grew up within a minor noble family located within the County of Urnst. His grandfather, Tiberium the Elder, was granted knighthood and a small estate after making a name for himself in a campaign against an invading tribe of orcs. In the course of that campaign he rescued a gnomish tutor known as Pyrzival, who he later employed as a tutor for his sons. The estate he was granted had been overrun in the orc invasion, and he vowed that his family would ever hold the people of that place safe from invasion. He would repair the ruined fortifications and establish a force of men to keep the peasantry and honest townsfolk under his protection safe. His god heard the vow, but so did others…

When Tiberium III was about 10 food became scarce in the area, and crops were dying. An orc tribe invaded the town, burning what crops they had before they could be harvested, and Tiberium II rode out to meet them, alongside his older brother (Dorian, a paladin candidate) and a small force of knights and men-at-arms. The keep itself, a large project, had not yet been finished and the stores were empty of food due to the poor harvest. Nevertheless, the peasants, children, and those who could not fight, took shelter within its unfinished walls. Among them were young Tiberium III and his tutor, pressed into temporary service as a bodyguard for the boy.

Night fell, and then dawn rose, with no sign of the elder Tiberium’s return. The day passed with no further news, but as night fell once more, the orc horde arrived and besieged the keep. The siege was short-lived, however, as a traitor opened the gates in the night, and the defenders were overrun. Pyrzival barely escaped with his life, escorting young Tiberium III and his mother through a secret passage to relative safety. From within the walls they overheard the orc chieftain claiming he had been tipped off to the vulnerable keep by someone within the nobility of Urnst, whose corruption had already caused conflict with Tiberium the Elder.

Fearing betrayal from among the nobiity of Urnst, Pyrzival called in favors and took the young Tiberium and his mother to a small town on the outskirts of Rookroost, known as Dunwitch, sheltering within a secret church of Pelor there.

For the past 6 years, Tiberium III has been raised by his mother within the church; he had already been training as a squire and was hopeful to some day become a paladin like his father. His training only intensified, but the local church lacked the resources and knowledge to continue his formal cavalier training. Their priests taught him what they could, and with time, he became a paladin candidate of Pelor. He has recently passed his last training exercise, and sought permission from the church to follow what he believes is a divine call towards Highport.