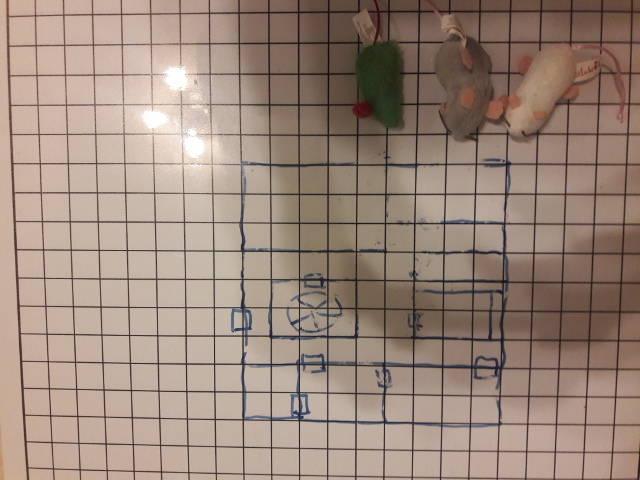 We left the initial group of six people investigating the Sage’s Tower. With one of the players missing, three party members remained just outside the bottom of the staircase, cowering in fear and inexperience… Fafhrd and the Mouser advanced boldly to the right, encountering two doors. One led to a room filled with animals, most of them in cages, but several giant rats and several bat-like creatures turn and rush the party in a frenzied mob.

Disoriented, the bat-like creatures failed to escape the room or hurt the party. The giant rats, however, account for several of the bats – and in an amazing display of dexterity, a giant rat leaps onto the Mouser’s throat and tears into it. The Mouser goes down screaming in agony. Fafhrd and his clerical companion defeat the rats, and shortly thereafter hear sounds from the stairs behind them…

Previously, the rest of the party had been taking more time to organize themselves before departing Dunwitch. They spoke to Tom, obtaining information on the reward for finding information on the sage’s fate and finding a cure for the plague that he was supposed to have been working on. The party (minus Larry) also signed up for adventure insurance from Adventure Capitalists, naming themselves “The Band of Misfits”.

After some discussion they set up towards Rookroost, arriving in the middle of a discussion among the gate guards about a new rule requiring that helmet visors be kept lifted. (“How am I supposed to intimidate anyone this way?”)

The half-orc Lunk escorted the party to the second gate, where Lunk returned to his duties and Harry took over. Harry is a neater and cleaner human specimen, and was able to escort the party past the third gate to the sage’s tower readily enough. Their investigation unknowingly followed in the footsteps of the prior party, noting the animal screeching and the abandoned food deliveries. At every step they were reminded that someone had been there before them, asking the same questions.

The Flaming Iron Skillet (whose logo is on the boxes of delivered food) revealed that food deliveries had been arranged, but hadn’t been picked up for a few days – maybe a week. The delivery boy was accused of pilching from the delivered food, but denied it.

Following Harry’s guidance, the party returned to the barracks in the hopes of contacting the investigators who had been there before them. The night was proceeding rapidly, however, and though the previous party had bedded down in the barracks, they were not there when the second party arrived. Thinking quickly, everyone proceeded to the tower, leaving the guards behind this time.

Searching the bottom of the tower revealed no entrances, so the party sought entry climbing up the roof of the lower building. With a monk and a failed ranger candidate in the party, the short climb was easy. The harder part was getting the heavily- built and armored dwarf up the wall, but a masterful move with the monk’s spear and a bit of leverage had Thorbald almost literally flying through the air.

Once on the lower roof, the party discovered a rope hanging from the top of the tower, and rapidly climbed. Ignoring the scientific, astrological, or astronomical instruments after a very brief glance, they inspected the staircase leading down into the tower. After a moment to light torches, they descended to the body on the staircase and inspected it briefly. The resident failed ranger determined the death was due to knee injury and that the pockets of the corpse were empty. Without checking for traps, they descended the remaining stairs to the bottom.

During the descent, the party heard the chaotic sounds of battle. As they arrived at the bottom, they found three adventurers notably holding back from fear, but willing to let them pass to investigate the sounds.

And that is how the parties met: the Mouser dying with his threat ripped out by a vicious oversized mouse, Fafhrd standing in a pile of rat and bat guts.

Introductions went quickly and the search for a plague cure began. Upon being revived and having his wounds bound, the Mouser informed the party that he had opened the door to a laboratory during the battle with the bats and rats, and at least one bat-like creature had escaped the room.

In the animal pens, many starving animals were still caged. Kriselle fed them, but did not release them, as they were evidently suffering from the plague.

In the laboratory, the party found a dissection table with medical instruments, many vials of mysterious chemical substances, most of them spilled or shattered, and the body of an old man… presumably the sage himself. The ranger determined he was wearing nothing besides his robe and a hat. Absolutely nothing else, not even a coin purse, or a money belt, or a holdout stash in his sandals. Not even any sandals. Thorbald moved to investigate a locked cabinet with an inscribed rune… when suddenly, another bat-like creature flew out of the darkness nearby and attacked!

The bite of the bat did little damage, but the frantic attempts to stab it while still attached to Thorbald left some bad cuts. After the bat was dispatched, the dwarf used his Cure Light Wounds to heal the damage, and promptly reached for the handle of the cabinet, which both the ranger and monk had assured him “Looks fine!” after carefully checking for traps.

There was a poison needle trap in the cabinet handle. Luckily the save versus poison was made, and only half damage suffered, which left Thorbald with only one hit point remaining. He determined to investigate the notes in the lab to try to find a cure while avoiding further danger. The contents of the cabinet consisted of 5 mysterious vials. (1: tranquilizer, 2: something that made the dwarf feel lightheaded and may be magical, 3: something unpleasant that the ranger will investigate, 4: another tranquilizer, 5: a potion later determined to be a treatment for the plague, 10 doses worth at 1 dose per day).

The rest of the party continued to explore, finding a storage closet (Burgess purloined the medical instruments for resale), a kitchen, a bedroom with attached bathroom and strangely glowing bookshelves. While searching for valuables, Burgess turned up a small locked strongbox (a woman’s necklace, a note “Keep your gift, I’ll keep my freedom”, and a strange book). Thic Duc, on the other hand, tried to pull up the rug to look for secret doors underneath, and in the process (failing a dex check with a natural one) brushed up against the glowing bookshelves. Crispy fried monk Duck!

After spending several hours in the sage’s bed recovering, Thic Duc took a robe from the sage’s closet to replace his own rather burnt one. The monk’s choice was worn and threadbare, but given the idea, Burgess located one with decorative silver inlaid threads for his wardrobe (or perhaps the nearest pawn shop).

Thorbald has used the time to good effect, determining that the sage’s notes contain the ingredients and procedures required to manufacture more of the plague treatment. (1 hour per vial of treatment, 1 gp ingredients cost, by a character with healing skills). Burgess investigated the door and determined that it could be opened by a mechanical pull rope (from inside only). He tried this, and found a group of guards waiting outside the tower. They loudly proclaimed that “The sage is alive and well investigating the plague!” and “All is well here!” after briefly “investigating” the party’s presence at the tower. It seems the neighbors had reported noise and general chaos coming from within the tower…

After that minor incident was averted, the party waited for morning and sent the Mouser (in guard uniform) to summon a cleric affiliated with the guard. They hoped that the cleric could arrange for the promised reward (or at least some of it) and verify that the treatment worked. As they waited for the Mouser to return, Thorbald began to develop plague splotches on his skin.

The Mouser returned with Rookroost guard cleric Moe in tow. Moe verified the plague treatment by observing Thorbald’s symptoms and their disappearance following the treatment, and promised to arrange at least a partial reward in return for the formula. The party chose to remain in the tower for the nonce while discussing their next move.