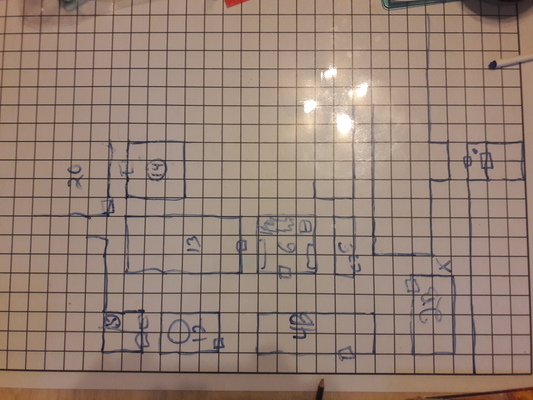 The 13th full game session was rescheduled for the following day at the last minute due to cancellations. Dean (Thic Duc), Matt (Barron), and Mariel (Leah) were present. Kriselle is awarded honorary XP for showing up Saturday even though she wasn’t able to make the reschedule.

As we left the party, they were trying to figure out what to do about the minitaurs that had escaped their captivity. Since a mysterious case of food poisoning had left Kriselle, Michael, and Kevin feeling less than adventurous, they were also seeking to minimize the risk they took without everyone at full strength and intellectual capacity.

Thic Duc visited the temple of insert favorite diety here and got the priests of Pholtus to remove the cursed philosopher’s stone, a procedure which involved blue body paint, smelly white paste, and a cat. Barron visited the herbalist and bought three healing potions for 600gp, 2 doses of “nighty night” brand relaxing herbal tea concentrate (plan A), and 2 doses of “Knock you right out” endorsed by Bill Cosby.

The search for the minitaurs led the party to the tavern, where the bartender was more than willing to talk about the commotion he heard around midnight last night. He pointed to a man in the corner, wearing a tattered red cloak that had once been fancy, and said he had come into the tavern shortly after the commotion began and had been drinking since, complaining of having been trampled by roughly human sized bull-headed creatures. After interrogation, it became obvious the man had been trampled by the missing minitaurs, and was suffering a severe case of post-traumatic trampling disorder, which he was treating with the popular remedy known as “shots of whiskey”. It also became obvious that he had come to Castle Greyhawk seeking investment opportunities. After obtaining information about the minitaur attack, Barron cleverly prodded the drunken investor into revealing where he kept his money, then failed his roll to pickpocket the money pouch. The drunk staggered out the door without quite being sure what had happened.

Barron bought four more raw steaks from the bartender, and marinated them in herbal relaxation tea (plan A) and sleeping droughts (plan B).

The party proceeded to the area where the trampling took place. No one was there, but the floor was clearly scuffed from hooves and there were bloodstains. The nearest door lead to the headquarters of the Cavaliers Club, where some sort of sporting event was being held. Dozens of armed and armored cavaliers were surrounding a tiny jousting ring set up in their headquarters, cheering for (and betting on) two of their members in red and blue tabards wielding lances. They were riding the missing minitaurs, who were now… not quite as mini as before. Barron promptly lost 50 gp betting on red. Unable to leave such a scene of happiness behind them, the party tossed two drugged steaks to each of the minitaurs and casually walked out the door and away from the chaos.

Returning to their quarters, the party discovered messages waiting. There was one from their old companion Chesty the (now ex) marine, and one that Cullum (presumably) recovered from Merrang the Enchanter. For a moment the whole party paused as they sensed the plot thickening around them… but then it was time to return to the dungeon below, and scout out the next level.

The party members gathered around the entrance to the second level of the dungeon, and secured ropes through the trapdoor below so that they could climb back out should it become necessary. Those not suffering from food poisoning would descend and scout the area, while the rest waited near the ropes to pull them up if necessary. Zanto can probably use the help reopening the bathroom facilities, too. They jury-rigged a rope harness to lower Pyro into the pit, which he tolerated when Leah had herself lowered down next to him.

In the 20’x20’ chamber below they found a large door, leading to another small antechamber. The antechamber contained a humanoid form apparently constructed of many separate limbs and body parts stitched together into a single being. The stitching was quite large, immediately visible, and a bit messy; the creature was wearing a tattered formal tailcoat, and asked, “What is the password?”

Thic Duc spoke up and said the password is “What”, which the creature accepted, and proceeded to offer a mouse-head hors d’oeuvres to each member of the party. All accepted. Only Pyro actually ate his. After everyone had their tasty snack, the creature opened the next set of doors and allowed the party to pass through. Thic Duc stuck a torch in the door to hold it open a little… just in case.

Behind the door was a scene of utter chaos. Orcs ran in one direction carrying trays of party supplies. Ogres ran in the other direction carrying party hats. Goblins frantically pushed a cart filled with trash and refuse down the hall. More goblins followed behind the cart picking up the trash that had fallen out, and the party chose to flag down that group. While the party frantically asking questions, the goblins gave them the cart of trash and told them they were the servants that had been expected before the party. (“Party? What party?”) They were told to take the cart of trash to the swill pit, and given directions (“north, and then east”). The goblins then ran off.

The party turned to the left and begin their explorations, cautiously seeking to avoid further notice amid the pandemonium. As they rounded a corner, they were surprised by an encounter with a bugbear, but their quick actions subdued the beast. They deposited the restrained creature into the trash cart and continued onwards to room 5, within which they found aprons and work clothes in various sizes. Thic Duc took an apron as a disguise and symbol of his authority as party leader.

The next door the party chose to open was labeled “2B”. Within the room, horrible, unspeakable events took place, which the party swore never to speak of again. They did, however, escape unharmed, and left the captured bugbear in the room as they left with the trash cart in search of the swill pit.

The party proceeded to room 6, which had no occupants but did contain a desk and some papers. After careful examination, the party determined that one of the papers was an elaborate seating chart. They stole a leather pouch with 10 gp and 50 sp.

Room 13 contained an ogre desperately trying to organize table decorations consisting of purple globes (perhaps some kind of fruit?) and mysterious weeds. The party showed their cart full of refuse and promised to return promptly to help once they had located the swill pit.

Room 20 was another barracks, empty this time, with goblin-sized bedding and clothes. In the corner lay an abandoned dice game, with the stakes piled nearby. The party contemplated hiding the empty, stolen pouch in the room, but chose to keep it and try to hide it in the offices of Morty (who the goblins had mentioned was organizing the party).

Room 12 contained a fountain of greenish liquid on an elaborate table setting. The party chose not to disturb it, but did open one of the barrels, and learned that it was filled to the brim with goat tripe. After a brief pause to detemine what that is, they all recoiled in horror.

Continuing to room 4B, the party discovered several very grumpy bugbears, apparently hiding from the party preparations, and quickly shut the door again.

Heading north once more, the two rooms to the north of room 12 turned out to contain the latrines and the swill pit. The party recoiled in horror at the first, and emptied their cart into the second.

They proceeded to room 14, within which they saw a sight that horrified them to such an extent that all three humans, and even the dog, failed to save versus paralyzation. The room’s occupants, several bugbears sitting at a table, rose up in fury at the interruption and seized the party immediately, delivering them back to room 2B.

The unspeakable horrors of room 2B were even worse on the second visit, and the party swore they would never reveal them, not even within their party journal. However, Thic Duc did feel like he learned something.

The party continued from there, heading north and east towards the center of the map. As they rounded a corner, they were set upon by a giant frog! The creature’s tongue snaked out and slurped Pyro into it’s gaping mouth while the party attacked with spear, dagger, and bow. As poor Pyro whimpered from the gnashing froggy jaws of doom (and the occasional arrow), and Barron’s daggers bounced off the creature’s slimy hide, Thic Duc’s spear struck with the swiftness of a snake! First once, then twice, then once, then twice again! And with the final heroic blow, the frog’s corpse fell to earth neatly sectioned and ready for the chef!

Unfortunately, so did Pyro’s unconscious body. The party argued whether to use a healing potion to bring him back from the brink of death. “From a purely rational perspective,” Thic Duc was heard to say, “The potion costs more than a new dog.”

Leah won the argument by virtue of not asking permission, and simply poured the potion down Pyro’s throat, saving his life… just in time for the arrival of two ogre guards charging the party screaming something about the appetizer, the appetizer!

The monk picked up Pyro’s body and fled, with the rest of the party close behind. They all made it to the ropes, avoided a second course of hors d’oeuvres, and climbed up to the Petting Zoo and safety. Michael managed to heal Pyro back to where the poor creature was at least able to limp along with the party.