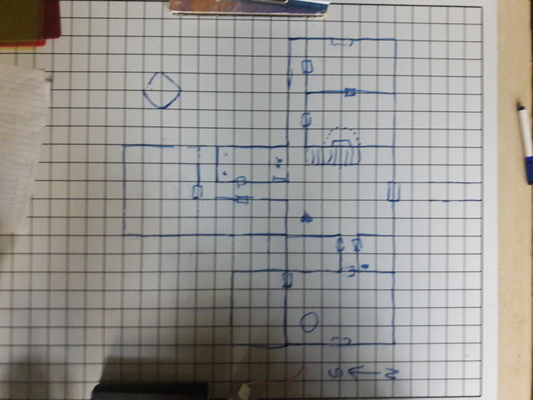 Initial discussion centered on exploring the mysterious lights and sounds in the manor near Saltmarsh. However, there was some unfinished business to sort out first..

In Dunwitch, a ranger and a magic-user noticed a raving madman standing upon one of the stones at the Holy Day Inn. He was claiming to “know The General’s Secret!” and knew how to defeat him. He claimed the General is a werewolf who steals children every full moon, bakes them into pies, and eats the pies. They approached him and asked for details, which he provided at incoherent and substantial length before being dragged away by Juliet. (In the meantime the plague treatment arrived and was given to Grog without incident; the three retiring characters remain in Dunwitch).

The ranger and mage set up for Rookroost, intending to … well, it’s not quite sure what they intended to do. Travel to Rookroost and investigate whether the General is actually a werewolf, perhaps. They arrived at the first gate and paid the toll. The passed the second gate and paid that toll (but were reminded of the previous two groups from Dunwitch, and found out about the sage’s tower and the barracks). Off to the sage’s tower they went, to meet up with the others and introduce themselves and inquire about werewolves…

Meanwhile, the characters in the sage’s tower were trying to figure out how to extract books from the bookcase without becoming extra crispy. After experimenting with tossing several items at the bookshelves, including a metal fork from the kitchen, the party eventually settled on using a sword to short-circuit the protective dweomer on the bookshelves and then using a wooden staff to knock books off the shelves. This eventually succeeded, but upon discovering only a tome about astronomy (and a verbal warning about taking books out of the library without checking them out), and despite being notified that books are rare and valuable things that a sage might protect with a deadly magical trap, the party grew bored and abandoned the pursuit of scientific knowledge.

They forgot about the fork they left in the bookshelves, still sparking. Consequences next session.

It was about this time that the magic-user and ranger arrived at the sage’s tower and quickly introduced themselves. After determining that the General was probably not actually a werewolf, the now larger party decided to seek their fortune in the manor near Saltmarsh together.

Saltmarsh is about a day’s travel from Rookroost and the manor another half-day. On the approach to Saltmarsh, they stopped at the lighthouse and met the Mayor, Lenny. Lenny told them where to find the manor and offered to convene the council to discuss a reward for ending the strange lights and sounds.

He also provided them with a cart (painted bright green) that belonged to a previous group of four investigators who had looked into the strange lights and sounds at the manor previously. The cart was empty, except for a small bag with some sort of pet treat inside. When moved, it somehow played a strange sort of music.

The Mayor also mentioned the town drunk, who had bragged about having actually been inside the manor recently. The party tracked him down at the inn in town, the Fish Tail Inn, and questioned him. It was clear that he was spinning more drunken tales than anything else, but he did provide proof that someone could enter the manor and escape alive even without being a competent adventurer, thus ensuring our heroes had at least some chance of escaping alive. He also mentioned a well. The party spent the night interrogating the drunk and trying to digest the fish stew. It the morning it would be off to the manor…

The manor of Saltmarsh is more formally called Ren Fields, for reasons that presumably died with the alchemist and his antisocial personality. The party learned this by reading the name on the gates. They then searched the outdoors for entrances (secret and obvious), finding (in addition to the front entrance) a back door that once upon a time led into a small enclosed garden area. They also located the well mentioned by the town drunk.

Determined to investigate everything, the party lowered Thic Duc down the well, whereupon he was bitten by a snake and accidentally knocked unconscious by the party trying to hit the snake. They retrieved him from the well, eventually managed to kill the snake, and bound the monk’s his wounds. (This resulting in formalizing an update to the house rules for firing into combat).

Then they chose to use the garden entrance and proceeded inside the manor.

Upon moving to investigate the manor interior, they were immediately threatened by a booming voice that told them they had come to their doom. (Two characters failed a save versus spells and were frightened; they will take a -1 on similar things in the manor).

Investigating the next two doors revealed a library and desk, neither with much of interest. The desk had a single intact locked drawer. After initially failing to open it, one of the characters eventually returned and completely dismantled the desk (not caring about the noise). This revealed a single small vial of a pale rose-colored liquid.

Continuing to the main hall, the cleric cast his detect evil spell, using it as a compass to locate sources of evil. Some beastial sources were within the house, particularly on the second floor, but the majority of the evil was coming from below the house and even extending out to below the front yard. Hmm… aside from that, there were tracks in the dust covering the main room’s floor leading to the room they came in through and upstairs.

Moving into the north wing, the party looked into western room first. Looking over the room, they noticed a loose stone in the fireplace, and immediately reached up to remove it, with two characters forming a human siege tower and lighting a torch to look inside before sticking their hand in. Behind the stone was a small locked box … and a large spider. The spider ran out and attacked when they tried to push it away from the box, and eventually bit one of the characters, who is currently suffering an enfeeblement effect due to the poison.

At this point the party took a break for lunch, and the monk collapsed into a stupified sleep from which he would not awaken… and the players closed the session.