As we left the party, Jonathan was recovering from a day or two of fish stew poisoning at the Saltmarsh Inn, Dean was camping with Larry and Kriselle (all three had been absent the past session, and the latter two are still absent), and the remaining three had scouted the bullywog camp and negotiated a fragile peace and safe passage to the lizardfolk lair.

Elion woke from a daze of nausea and sickness to vaguely remember he had planned to follow a band of adventurers to the west. There was no sign of them in the inn, and as his wizardly mind sharpened, he gradually came to recall that they had departed the inn early that morning, but the fish stew had left him too weak and sick to follow as he had planned. Indeed, it had nearly left him too sick to remember their departure. Yet as is often the case with such things, once the bad food was on the outside a night’s rest is often enough to restore health to the afflicted body. Elion felt once more the call of adventure, and resolved to follow after the adventurers himself. Just as soon as he found them.

Finding them might prove more of a challenge than anticipated, as the innkeep did not even remember them departing his inn. Luckily, they had described their intent: to search the swamps to the west for a lizardfolk lair. Inquiring of the barkeep whether a local guide might be found, the barkeep suggested Otis, a local trapper currently sleeping off a drunk in the tavern corner. Beside him lay a fresh pile of skins and pelts, the result of his labors. The barkeep was careful to say that he wasn’t recommending Otis exactly, but the man did hire out as a guide occasionally and was reasonably competent when not drunk.

As it turned out, Otis could be bought for the price of a keg of the barkeep’s best. He checked Elion’s pack for proper travel gear: bedroll, rope, 10’ pole, iron rations.. oh, wait, none of those, better go get some before we go. They headed off to the herbalists’ shop for 2 weeks of iron rations, and while they were there, inquired about the druid who was supposedly in town looking for work. The herbalist suggested he had probably hired on with Elion’s friends to find the lizardfolk.

Elion and Otis set out along the western coast road, passing the “haunted” manor (which Otis seemed to recognize with some trepidation). They came upon the three campsites, noting signs of recent use, particularly in the third campsite near the end of the road. Elion found, and picked up, the d-snack wrapper the party had previously noticed.

At the end of the road, Otis looked around for tracks and was able to pick up the party’s trail from there. In fact, he was exceptionally confident and detailed about his ability to both follow and identify the correct party (Rolled an 01 on his tracking check). Otis was able to lead Elion to the party’s campsite, where Thic Duc was recovering from an overindulgence in meditative spirits. The pair examined Barron’s note and decided to follow his directions to the bullywog village, and proceed onwards from there with the benefit of any additional information they could pick up.

The frog people were eager to see Thic Duc, Elion, Otis, and their silent friends move on from their village, and offered vague directions towards the lizard people. They also explained (or perhaps complained]) that the lizardfolk had invaded the swamp recently and displaced the bullywogs from their original home. The bullywogs did not know why the lizardfolk had moved in, but they weren’t happy about it.

With Thic Duc encouraging the party to move along, the group left the bullywog village and made their way to the eastern shore of the Dunwater river as dusk fell.

At roughly the same time, Barron, Leah, and Kevin heard voices from the other side of the river. Thinking quickly, Barron deduced it might be his companions catching up, and wrote out a note, which he then wrapped around a crossbow bolt and fired across the river. Luckily, he hit a tree. Not necessarily the one he was aiming at.

Thic Duc was meditating and noticed nothing. Elion heard the sound of the bolt hitting a tree, and eventually Otis noticed the crossbow bolt and the note wrapped around it. The note read, briefly, “Friend or foe?”

Thic Duc circled “friend” and shot back across the river, striking Barron for maximum damage. (Oops) Barron read the note while coughing up blood, and Kevin cast his healing spell while removing the bolt.

Both groups decided, with much yelling across the river, to camp overnight and reunite on the Western shore in the morning. They would use the ford to the north to cross the river, in order to avoid the giant crawfish. (To which decision Otis quietly muttered, “It’s crawfish or crocodiles…”)

When the sun rose the next morning, both groups made their way along shore to the ford. The water there was shallow, only a foot or two deep in most places, with small-to-medium sized rocks to make the footing treacherous. As the party was discussing how best to cross the river, Elion was overcome with a powerful sensation of eagerness and enthusiasm! He immediately sprinted at full speed across the river, only to trip on a rock and fall flat on his face, striking another rock on the way down and knocking himself unconscious (Failed diff 10 dex check for sprinting across the river as fast as possible and took 4 points from a 1d4 damage roll from the fall).

That was when the crocodiles appeared from upstream.

From the far shore, Kevin rapidly made his way out to the fallen wizard, healing him and restoring him to consciousness while the crocodiles bore down on the group. Leah sent Pyro charging into the water after the lead crocodile, a terrifying sight indeed for such a scaly beast. Canine and crocodile began a vigorous debate about the nature of tooth and claw, and whether size mattered more than how well you used them. Pyro won, eventually. 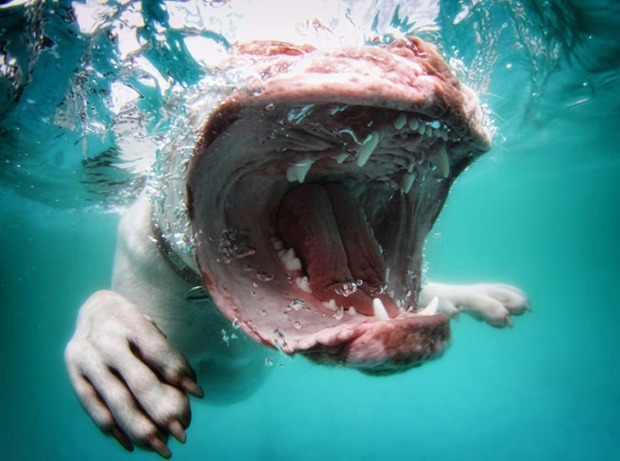 Leah opened fire with her bow on the other crocodile closer to her. Thic Duc from the other side of the river did the same, joined after a moment by Kriselle. Their combined missile fire wounded both of the remaining crocs, but killed neither.

With Pyro still fighting for his life against one of the crocodiles, and the others too close to the party to risk further missile fire, Kriselle and Thic Duc moved into the ford to face their crocodile in melee combat. Barron and Leah did the same from their side. While they closed the distance, Pyro finally throttled his croc, with some help from Kriselle to finish it off. One down!

The western crocodile looked at the three people surrounding him in the ford and chose to attack the wizard (d4 roll from left to right; rolled 3). His claw attack missed, but the huge jaws closed around the wizard’s waist, and blood filled the ford as huge teeth ripped into the unarmored wizard. Without even the chance to get off a spell, the elf expired (Natural 20 leading to double damage on 1d12; rolled damage was 11, starting from just 2 hit points, resulting in -20 hit points; the wizard’s constitution is 11, meaning he was thoroughly dead).

Perhaps infuriated by the death of their new friend, Barron’s short sword swiftly stabbed the western crocodile behind the head, killing it instantly. On the eastern side of the river, Thic Duc used his open-hand techniques to wrestle his crocodile to death. 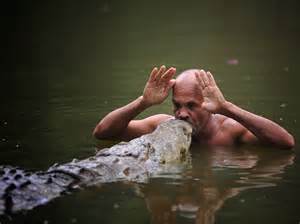 With Elion dead, but all of his pieces in their possession, the party made camp and discussed their options. Someone would be making the trek back to Saltmarsh to invoke the insurance policy Elion had wisely purchased, but who that would be was not yet clear. (Any players not present next session will have their characters return to Saltmarsh with Elion’s body.) Otis was feeling invigorated by all of this adventure and considering signing on with the party.