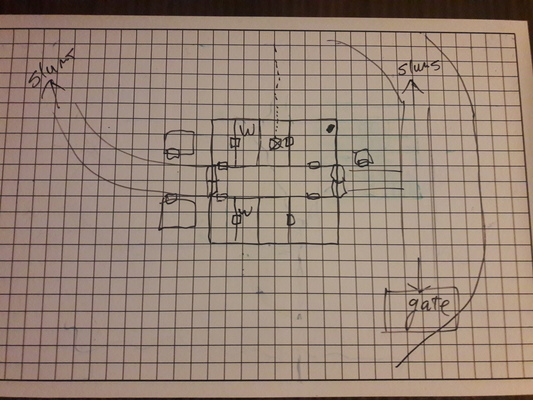 As we left the party, they had taken care of a crocodile problem that came with an unexpected dose of dragon. The lizardfolk had the head of their crocodile (something they were perhaps less happy with than the party deserved), and at least a temporary peace was set. The next step was to make up for the weapons the party had intercepted, preferably by recovering the original shipment.

Elena knew where the weapons had been stored after the party recovered them, but General Perneti had raided most of the locations associated with the Thieves’ Guild. It was likely the warehouse had been taken over, though the General would presumably have no reason to suspect there was anything unusual about the weapons aside from their similar markings. She was able to provide a map, including a secret entrance to the warehouse inside one of her hidden offices.

The party formulated a plan:

The operation mostly went according to plan. They were able to trade forged old-style forms for non-forged new style forms, to which they added the details they needed for both carts and weapons. A carpenter was found to make platforms. Dancing girls were found locally, albeit mostly with plague marks. All of this required a lot of travel around Rookroost, and things were clearly changing.

In the course of their travels, Barron made a side trip to the better part of town to sell the loot from the dragon’s lair along with some previously forgotten loot. Almost 5,000gp in jewelry and pearls will pad the bank account quite nicely. Both the thief and the druid commissioned dragon-hide armor (leather and banded, respectively) for a small fee in addition to providing the materials. The result will be available in one month per armor, with the leather first.

The midnight scouting mission went well, except for the brief period when Pyro led the way through the secret passage and set off a trap. The group made their way into the warehouse’s semi-secret office and broke into a few of the drawers on Elena’s desk there. They retrieved a purse with 100pp, a lot of paperwork, and a nice dagger. Barron returned all of what he took. Thic Duc kept the dagger.

Looking outside of the little secret office, the party confirmed that at least some of the weapons were still in the warehouse. They were marked in crates, and some had been opened and weapons removed. In the other direction, out the concealed door, Barron heard a horrid snoring and the rattle of chains. Upon investigation, this proved to be a troll chained to the corner of the room, hooked up to some sort of apparatus that appeared to be harvesting some sort of troll juice.

Choosing not to face the troll, or even risk waking it, the party left with the knowledge that the weapons were where they were supposed to be.

The next day, they picked up the carts from the quartermaster’s office. This time, they had the proper forms and were given their carts. Horses, of course, are on the other side of town… so they had to go get those first.

Proceeding to the warehouse, they talked their way past the gate guard with their forms in order. Within, they found a unit of the General’s red shirts. They were curiously unresponsive to conversation, but moved out of the way when given the proper orders.

Moving deeper into the warehouse to load the weapons, the party encountered the loading assistants: the ogres Tiny and Dumb, who had apparently been assigned to load and unload cargo when needed. From their comments as they loaded the weapons into the party’s carts under Thic Duc’s watchful eye, someone had also assigned them to watch each other to prevent theft. As they carefully did so, they loaded a few extra crates at Thic Duc’s casual request; these contained alchemical glassware with traces of red liquid…

While the loading took place, Barron wandered into a nearby room and met the orc shaman Alpha and his subordinate Beta. They were arguing over whose turn it was to animate a plague victim’s corpse and add it to the unit of redshirts. Beta lost, and set to casting his Animate Dead spell while Alpha muttered under his breath about orcs females being taken captive and held hostage. The two of them are animating the dead under duress. Alpha orc was even willing to demonstrate, by cutting one of the soldiers and watching the wound heal.

With that unsettling demonstration under their belts, the party finished loading their carts and left. A quick stop in a nearby alley provided a transformation of the three heavily-loaded wagons full of weapons into the Traveling Band of Misfits and Dancers, complete with girls dancing on top of carts and strangely dressed extras passing the hat for funds. They made it out of Rookroost without incident, though in the distance a faint hint of possible pursuit could be seen.