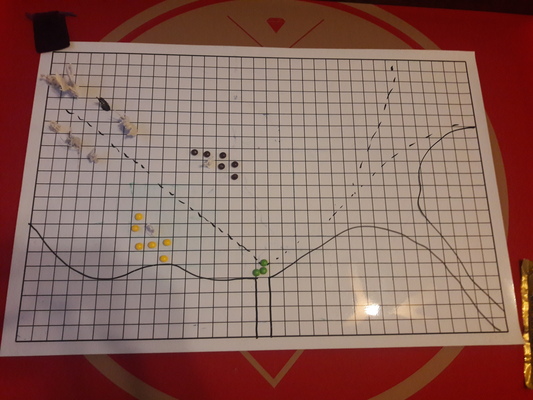 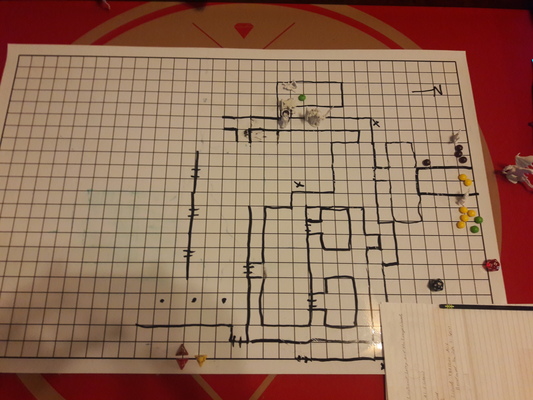 As we left the party, they had been planning their assault on the sahuagin lair. Joined by the Scooby Gang, a small unit of bullywog warriors, and a platoon of lizardfolk soldiers divided into two squads (Leisurely Lieutenant Larry and the Lounge Lizards; Salty the Sargeant and the Leaping Lizards).

The group traveled with two carts full of provisions, along with their allies, via the northern track leading around the edge of the swamp. Thanks in large part to the vigilant efforts of the lizardfolk and their knowledge of the swamp, they avoided any encounters on the journey. On the morning of the 7th day, they approached the island where the sahuagin now live. After consulting with the lizards and bullywogs on relative movement speeds in water and swamp (water: bullywogs are faster than fishmen are faster than lizards; in swamp, both bullywogs and lizards can outrun fishmen), and assigning those party members more spaced out than usual to guard the carts, the party moved closer to the sahuagin lair to formulate their plans.

Upon seeing their old home more closely, Salty Sarge announced that it had changed somehow. It was lower in the water than before, and the causeway led to a new entrance. This entrance was blocked by what appeared to be two large stone doors, with visible metal fittings blocking some kind of arrow slit.

Their first plan was to send the bullywogs to the front gates of the sahuagin lair during daylight, when most of the fish-men were likely to be asleep. The bullywogs were confident they could keep ahead of the sahuagin pursuit on land, so they would attract attention from any guards, then flee up the trail into the swamp. Any pursuit from the sahuagin guards would be led into an ambush.

This plan failed. The bullywogs were able to approach the causeway, and even engage in their loud mating calls, without provoking a response from the sahuagin fortress. When they approached closer, someone within the fortress opened a metal cover blocking an arrow slit in the door. Several gleaming eyes looked out on the three bullywogs for a few seconds, then closed the viewing portal in disgust. Apparently three belligerant bullywogs are not considered a threat sufficient to send a patrol in pursuit. At least not in broad daylight.

The next plan was to bring the whole party up as close to the arrow slits as possible, and use the slits to fire into the fortress, while attempting to stuff someone inside who could manage to open the doors. Possible candidates included one or all of the bullywogs, or Mr. Crackers the zombie bird, or possibly Daphne. However, as soon as the group approached the doors, the sahuagin opened the arrow slot and begin firing. The party – including the lizardfolk units and the bullywogs – rushed the door at once. At the last momnet, Elorion remembered that Velma had memorized the knock spell – and called for her to use it. While darts and crossbow bolts flew in both directions, Velma tossed a ball of string through the arrow slit and somehow used it to hook into the door lock mechanism. The doors cracked open slightly, clearly no longer locked.

Fred opened the door and charged the guards within. Twice, Velma’s darts flew unerringly through the melee to strike sahuagin who left the front lines to try to ring the massive gong against the rear wall of the guard room.

With the first guard room of sahuagin dead following the charge, the party came under fire from another group of guards behind a bronze gate. The party charged this gate as well, with the lizardmen units taking the lead in melee combat as Fred’s wounds began to take their toll. The sahuagin released a net trap from the ceiling that caught several of the party with a nasty, hooked net that prevented them from moving without inflicting painful wounds. Enough of those present manged to escape the net to make freeing those held captive a simple exercise, however. Before long the second group of sahuagin fell, mostly to missile fire with the occasional stab wound through the bars of the gate contributed by the first lizard.

The bronze gate was opened by encouraging two of the bullywogs to press themselves through the gate. The first made it through the bars, but was not strong enough to turn the wheel that would raise the gate, even when jumping up and down on the handle. Another bullywog tried to slip through to help, but failed and got stuck until Fred offered to help with a well placed boot. A little too well placed; Fred’s boot propelled the hapless creature into the far wall, knocking him unconscious. The third bullywog was the charm, however, slipping through the gate without help and successfully opening it for the rest of the party.

Beyond the guard post, most of the complex seemed to be deserted. There were several empty rooms, many of them apparently still under construction or partially complete.

One of the large rooms the party found was the armory, filled with tridents, daggers, hooked nets, and other aquatic weaponry. The lizardfolk were enlisted to bring the weapons back to the carts, so they could be used against their original owners later.

The other two rooms were smaller, and mostly empty, with only basic furniture and apparently abandoned tools left there. Both rooms were tiled. The eastern room was tiled with dark green on the walls and a pale green ceiling. The western room was tiled in dark green on the walls, with the ceiling left bare stone. Thic Duc used a hammer and chisel to carefully remove one of each type of tile present in each of those rooms.

After determining their location on the maps provided by the lizardfolk, and exploring the initial rooms, the party waiting for their weapon-stealing operation to complete before exploring further.

To be continued… Treasure