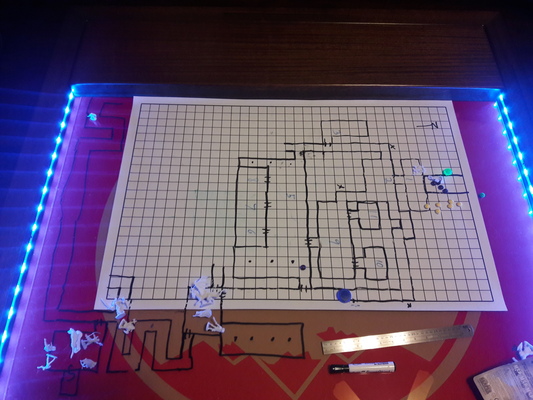 As we left the party, they had been planning their assault on the sahuagin lair. Joined by the Scooby Gang, a small unit of bullywog warriors, and a platoon of lizardfolk soldiers divided into two squads (Leisurely Lieutenant Larry and the Lounge Lizards; Salty the Sargeant and the Leaping Lizards).

The first order of business was to send Elion back to the cart to study his spellbook and supervise the looting of the armory.

The party chose to begin by exploring more of the sahuagin lair, traveling south along the eastern corridor, with the bullywog squad in the lead… themselves led by a bullywog quite high on Shaggy’s mushroom treatments. After exploring the corridor, the lead frog stopped to scratch his head as he approached an archway, then backed away and motioned the rest of the group back. Barron, who was in the lead (after the bullywogs), tried to slip past and failed his move silently roll. He looked into the room ahead and noticed a trio of sahuagin guards, lounging around a small table, clearly having fallen asleep playing cards… and now startled awake again!

The party entered combat, sliding past the bullywogs, who were rapidly fleeing combat. It took a surprisingly long time for the party to wear down the fish-men, despite their superior numbers. During the fight, a grate at the back of the room swung open, and a halfling slipped out. He grabbed a chair and laid into one of the fish-men from behind.

With the battle over, the halfling introduced himself as Griff, from “The Shire” (a fictional location that does not exist anywhere in Oerth). He had joined up with an adventuring group planning to attack the sahuagin lair weeks ago, but the group had been captured trying use the underwater entrance to the lair and used as slave labor and fresh rations for the sahuagin. The home improvement work had been reduced lately, with more slaves finding their fate as breakfast. The other party’s leader Elmo was also among the slaves, though in poor health, along with one other survivor who remained delirious despite their best efforts. Griff was able to find most of his gear – minus weapons – within the guard room.

With help from Shaggy (herbalism) and Kevin (healing), Elmo was brought back to consciousness if not full health. He stated he was willing to accompany the party if given a chance to rest, recover his strength, and study his spellbooks. (He will need at least a full day of rest and possibly additional healing magic before being able to engage in strenuous activity).

While the party introduced themselves to Griff and vice versa, Elmo mentioned that he had helped build a secret door into a room somewhere to the south. He wasn’t sure exactly where, but was able to point out the correct passage to reach that area of the complex.

Resuming their explorations southward, the party made a couple of lucky turns and soon found a storeroom containing a variety of construction materials and supplies. After practically everyone in the room searched for secret doors, they did in fact find the one that Elmo mentioned, and behind it was an extension the size of a large closet containing the gear captured from the invading party. Since most of those individuals were dead, Elmo was content to claim his own items (a set of spellbooks, and a wand which “changes things into other things”). Griff recovered the rest of his equipment.

There was a coffer towards the back of the room, which Thic Duc opened without checking for traps. He was promptly knocked unconscious by an electrical discharge, but a friendly party member fed him one of his healing potions and got him back up again.

The party spent quite a while debating who should claim which item, leaving two bullywogs just outside the door while everyone else discussed at normal vocal volume who should wear the plate mail, whether anyone could use a shield, what a magical leather cloak might do in an emergency, and why the bullywogs left outside the room were being so quiet…

… that would be because they had been ambushed by a squad of sahuagin. One was killed instantly, and the other fled in terror.

The party set up a hasty ambush around the entrance, gaining little advantage because the sahuagin were already on alert. However, they did (for once) have a clear range of missile fire on the enemy without putting their friends and furry companions at risk. Three of the sahuagin managed to get into the room and reach melee combat before the fleeing bullywog summoned Fred and Shaggy as reinforcements. Fred promptly advanced to block the entrance to the storage room by falling flat on his face in front of it. This tactic, unusual though it was, proved successful, as the Fred-and-Shaggy tag team managed to hold off the sahuagin squad leader and his two minions (who quickly ran out of things to throw) by themselves.

After a melee combat that included a Barron-fishman-Pyro sandwich, the party prevailed, though Elmo was knocked out of the fight by a single thrown spear at the beginning and Shaggy fell to the claws and teeth of the fishy leader before Fred finally struck the killing blow. The two surviving minions were faced with a morale check upon the death of their leader, and one chose to flee, while the other chose to charge furiously at the party. As most of the group focused on the remaining fish-man in combat, Griff slipped on his ring of invisibility and pursued the fleeing survivor. Fred joined the pursuit a few moments later.

After running for several minutes, the fish-man stopped to catch his breath, and Griff prompted backstabbed him to death. Fred caught up a moment later.

After running down the fleeing sahuagin warrior, Fred paused to consider the location of any opposition. His Detect Evil ability revealed a cluster of unpleasant creatures towards the center of the southern half of the lair, but otherwise, it was clear. He then made his way back towards the party, with Griff accompanying him.