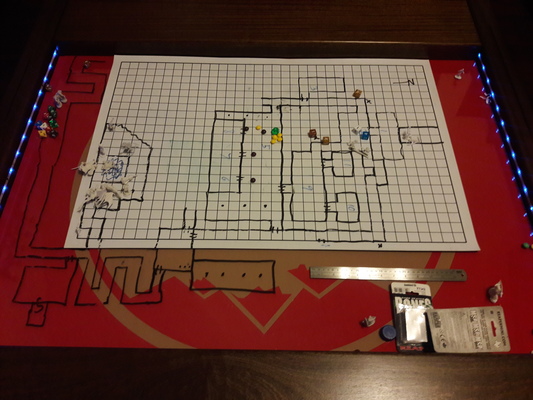 The 26th full game session. Dean (Thic Duc), Matt (Barron), Nathan (Kevin), and Mariel (Leah) are returning cast members. Adam (Hargrimm) and Coby (Gunnar) are new players who have not yet had a chance to introduce themselves properly.

As we left the party, they had discovered a treasure room filled with magical items and gear . Joined by the Scooby Gang, a small unit of bullywog warriors, and a platoon of lizardfolk soldiers divided into two squads (Leisurely Lieutenant Larry and the Lounge Lizards; Salty the Sargeant and the Leaping Lizards).

The party’s first order of business after successfully destroying the sahuagin patrol was to send Elmo back to the supply carts. Barron talked to him about his polymorph wand, and successfully persuaded (essentially, extorted) the command word from poor Elmo… and promptly forgot to write it down. Somewhere in the confusion, the halfling with the ring of invisibility wandered off.

The party then turned their attention to investigating the remaining portions of the first level, particularly the area generating a strange, somewhat rhythmic banging noise. The noise was coming from a room directly east of the secret room where they had found so many magical items, with a few bends in the stone corridors between the two. Barron moved silently to the front of the party to investigate, followed after a short distance by Fred in his heavy armor leading the rest of the party. They were able to approach the source of the noise without being noticed.

Ahead of the pair lay a large, unfinished room. On the east side where the party entered, columns supported the ceiling. Directly ahead, a low railing surrounded a pool of water. A group of ten slaves, chained together ankle to ankle, worked the western wall with hammer and chisel under the watchful eye of two sahuagin with whips. Two of the prisoners were particularly strong-looking specimens, and the rest a smattering of hobgoblins, lizardmen, and bullywogs. 6 more were telling fish stories while lounging around the central pool, watching the slaves work.

As he took in the scene, Barron thought through his options in his mind. One prominent idea revolved around the polymorph wand Elmo had so reluctantly given up. What was the command word again? “Was it metamorph?” he whispered to himself, noticing but disregarding the odd tingling sensation coming from the tips of his ears..

Continuing to hide in the shadows of the entrance to the room, with the labor of the slaves covering any noise, Barron and the rest of the party arrayed themselves to attack. With Leah and Shaggy in the lead, they attacked with the benefit of surprise. Shaggy was still a little groggy from his herbal concoctions, and managed to put a few darts into his feet. Leah, on the other hand, singlehandedly sent at least 5 fish-men to sleep with the fishes. With that, Fred charged into the room, and the general melee began.

The two human slaves working on the wall attacked and killed their whip-wielding guards, who had turned to face the attacks and exposed their backs to the prisoners they were guarding. Despite their chains, hammer and chisel made short work of the two, but not before Pyro and Fred had nearly reached them. The rest of the party advanced to attack the two surviving fish-men lounging in the pool, with Barron and Thic Duc focusing their attention on freeing the prisoners from their chains.

It took several minutes for the penultimate fish-man to die, and seeing his death, the lone survivor slipped under the water and fled.

Barron and Thic Duc continued frantically working on freeing the prisoners. The rest of the party discussed their actions, remaining clustered around the pool of water in the center of the room. The pool itself turned out to be a set of stairs leading downwards, presumably to underwater levels below. Several minutes passed without much getting done, though the prisoners were freed from their chains. No one got a close look at Barron, and no one bothered to introduce the two prisoners to the rest of the party or vice versa. Or search for their gear, which could become a fatal mistake for those who charge into battle naked and armed with chisels.

After the party spent their few minutes dithering, 6 more sahuagin leapt from the water, grabbing those standing around the pool and trying to drag them under. Kevin, Fred, Daphne, Leah, Barron, and one of the freed slaves were pulled in.

Thic Duc and Velma briefly argued over whether her scrolls of water breathing would work. Velma finally gave in, reading one and bestowing the effect on Shaggy, who promptly dived in sword-first, aiming for a sahuagin warrior.

Barron killed the fish-man who dragged him under and aimed his wand at the one attacking Daphne, thinking hard of something harmless and fluffy, like a squirrel. He missed, and Daphne promptly became a squirrel, and swam at the sahuagin attacking her with fury in her eyes and red on her tiny claws.

Leah and one of the freed slaves succombed to either their wounds, or being unable to breath. Fred and Shaggy pulled them out after killing the sahuagin who were attacking them. Daphne swam to the side of the pool on her own, but remains a squirrel.

As the leader of the sahuagin, identified by a gold armband, fell to the party’s attacks, he screamed at his last surviving companion to run. The party has not yet moved to pursue.