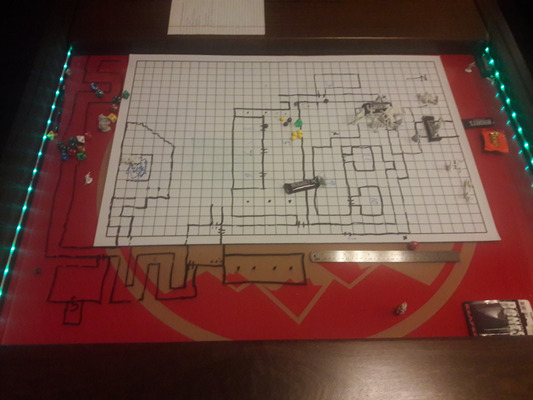 As we left the party, they had just beaten back an attack of sahuagin warriors emerging from the watery entrance to the levels below. The lone fishy survivor of the assault disappeared below, leaving the passage downward choked in blood and fish guts…

The party took a few minutes to rest and recover from the battle. Hargrimm and Gunnar, two escaped slaves who had been put to hard labor improving the sahuagin’s new home, stepped away for a moment to retrieve their armor and weapons from the nearby storeroom and returned to find discussion of the party’s next steps continuing. The consensus among the party seemed to be on waiting for the next wave of sahuagin to emerge from the watery depths into a prepared ambush. The sahuagin did not cooperate, and long minutes passed slowly while the party waited and prepared.

Adam took the opportunity to collect rocks and rope and make 6 bolo-like devices for use against stragglers. (Lacking rope use skill or properly designed materials, one of his weapons was poorly made and will fail in some manner when used. He later gave this flawed weapon to Elion, not realizing it was flawed.)

After quite a while passed with the party doing nothing but staring at the chum-filled water, suddenly one of the sahuagin corpses disappeared underwater! Barron decided to take the lead, lighting a firecracker and tossing it into the water. It fell on the open space where a fishy corpse had been but moments ago, the fuse sizzling out and the mild explosive sinking below the surface without any result.

Not missing a beat, Barron pulled out a 2-week-old steak he had been marinating in an herbal sleeping drought and tossed that into the water. It landed on the back of another fish-man corpse, floating there ignored while the other corpses disappeared once by one.

Finally, a fin broke the surface of the water. A frantic competition of monster identification proceeded, with Elion listing the scholarly possibilities from memory (“Sharks have fins. So do dolphins and something called a killer whale. Or it could be a narwahl swimming on its side. And there’s something called a swordfish, but those fins have a kind of ribbed construction…”). Leah settled the matter laconically: “Shark.”

Adam asked if sharks can be trained or domesticated. Elion told him “Not by humans.” Whether fish-men have transcended the limitations of common surface dwellers on Oerth is a matter known only to those adventurers who have braved the dangerous depths of the Nyr Dyv and returned to tell the tale. Sadly, none were available.

The party continued to stare at the water as the corpses disappeared once by one. Their discussed turned to past experiences with watery doom, and whether watery doom was a matter that needed to be embraced immediately, or perhaps it could be delayed indefinitely, or even fled from promptly and never faced again. They remembered (and shared with their new comrades) the tale of the killer dolphins, and Barron’s gruesome death at their sharp teeth and pleasant smiles. They remembered faring rather better than that against the land sharks, mostly because they remained on land.

Nevertheless, the party did aim a few crossbow bolts at the occasional glimpse of shark fin in the bloodied water. It took several tries before they scored a solid hit and that fin disappeared below the surface, leaking its own bloody contribution to the chum.

In a strange and disconcerting process of discouragement, the party gradually talked themselves out of venturing below as they had planned and chose instead to retreat towards the entrance. Who needs adventure? We all have safe, pleasant professions we left behind. We can go back to our dull existence where no one tries to kill us and we don’t have to venture into watery doom!

Little did they know, in Soviet Russia Oerth, watery doom comes to you!

The group arranged themselves in their marching order and proceeded back through the parts of the first level they knew well, stopping occasionally as their more stealthy members detected noise ahead of them. As they approached the entrance, where the guards had been stationed and where their bodies had remained after the battle, the lead members of the party noticed something different. The bustling lizardfolk operation to load the contents of the armory into their carts had ceased. Their lizardfolk allies, Leisurely Larry and his Lounge Lizards, Salty Sarge and his Leaping Lizards, gone without a trace. Even the bodies of the fish-men they had slain were gone, though blood stains on the stone and tile remained.

Nevertheless, the party continued onwards. As they passed through the narrow corridor between the first and second guard rooms, with Fred in the lead followed by Thic Duc and Velma, suddenly the latter pair were seized by a mysterious force and held in place.

While those behind tried to determine what had happened, Fred (in the lead) turned around to try to help. He was promptly struck from behind by two tridents, inflicting noticeable damage even through his armor. He spun around rapidly to face the attack just as a globe of darkness fell over the whole group.

With Fred fully engaged, both Velma and Thic Duc paralyzed, and the whole mess covered by magical darkness, Elion begin trying to move forward. He made it past Velma and tripped on Thic Duc in the dark.

Barron, Leah, Pyro, Mr Crackers, Hargrimm and Gunnar were bringing up the rear. The sound of wet and fishy footsteps from behind the party alerted them to the need for a rear guard. They set up an ambush at the southern entrance to the armory, using the door as a bottleneck. A volley of arrows from Leah and a well-time backstab from Barron took out the first squad. The second squad approached, their path blocked by Pyro and Mr. Crackers, with Leah still firing from behind them both. Weakly, from behind, a voice cried out for help towards the front of the party, but Leah ignored it; clearly the speaker was not badly hurt and she was busy slaughtering fish-men. As the disciplined unit of sahuagin continued moving into the room despite the arrow fire, Barron backstabbed the one in the lead, turning the fish-man into a pile of fish sandwiches!

Still, the battle was not going their way, as another unit could be seen advancing through the entrance. It was time for new tactics. Mr. Crackers expelled the alcohol Barron had been feeding him for months in one fell vomitous episode, Leah’s arrows struck him from behind, and he fell into the puddle. The lit torch the avian undead was carrying in his zombie goblin hand set the puddle on fire.

Facing a fiery barrier that did not agree with their fishy disposition, the sahuagin retreated out of view. As the sounds of combat faded, the call for help up front was heard once more, and the second half of the party begin to move forward to assess what had happened in their absence..

Fred had fallen, valiantly defending his frozen comrades, his last words “Hiho, Silver!” as the fish-men dragged him away…

As the frozen paralysis finally wore off, Velma and Thic Duc returned to the fight, but they were still trapped within the globe of darkness. Wounded, Thic Duc chose to hide against the wall after tending to his friends with healing potions, while Velma shouted “Fire in the hole!” and threw something towards the entrance. It exploded, but somehow the light from the explosion failed to penetrate the sphere of darkness. Nevertheless, two squads of the fish-men were swept from the battle.

Two more units of sahuagin appeared from the east and west entrances, alerting the party to their presence by the wet squishy footsteps on stone and tile. Thinking quickly, Daphne the squirrel dug around in the party’s bags and located the last of the group’s d-snacks, clutching the package in her tiny paws as she raced through the chaos of battle towards Scooby… her sharp teeth, tiny though they were, made short work of the packaging as she dropped the snack into Scooby’s mouth. The globe of darkness prevented anyone from seeing what transpired… but a much louder Scooby immediately turned to the east and let loose a massive gout of fire! The smell of fried fish filled the air as he turned back to the west and engaged with tooth and claw.

Thic Duc was hit by a thrown net and immobilized again. The sahuagin outside begin to drag him away, but he slipped out of the net and strove mightily to push the entrance doors closed. He succeeded with his door, but not before fishy hands from outside grabbed his wrists. Thic Duc was going to sleep with the fishes whether he liked it or not!

Somewhere to the south, Leah wondered if she could order Pyro to fetch one of the party members. After all, she reasoned, at least one of them is a waterfowl…

After feeding the d-snack to Scooby, Daphne climbed up on the beast’s back and chittered at the enemy. A challenge! She raced forward, using Scooby’s back as a runway, and soared at the fish-man facing Scooby’s teeth and claws, fury in her eyes… but at the last moment, her target ducked!

Undaunted, Daphne landed behind the fish-man entirely unnoticed by the rest of the unit. She gathered her energy, spinning her hind legs against the stone floor, her little eyes glowing red, and finally leaping straight at the back of the fish-man she had missed a moment ago. This time, with surprise on her side, her aim was true, and the tiny ball of furry fury landed on the back of the fish-man’s neck. Viciously, Daphne dug in with her huge front teeth, peeling back the fishy flesh with her front paws, and disappeared into the fish-man’s chest while it screeched in agony and flopped about like a fish caught out of water! As the fish-man fell backwards, already dying, Daphne clawed her way out of the creature’s chest cavity and surveyed the screen of the battle standing upright on her hind legs, the body below her proof that yes, even squirrels can backstab!

Meanwhile, Gunnar had been moving towards to the front of the party, trying to find a way to help. He engaged the squad of fish-men to the west, inflicting minor wounds and taking a few in return.

Elion had finally succeeded in reaching the front of the party and the edge of the darkness effect. He witnessed Thic Duc’s efforts to close the door, and joined in with the eastern door, but was unable to close it in time to prevent Thic Duc’s abduction.

Gunnar tried to move forward to help, but tripped over something and fell to the floor beneath Scooby’s battle with the western sahuagin unit. He was trapped under Scooby’s draconic form, horrified eyes locked on the dragon’s great balls of fire as the fish-men finally skewered Scooby on their spears, and the scaly ally fell limp.

Forcing himself out from under Scooby’s unmoving form with a grunt of effort, Gunnar rolled out from under, and promptly tripped Elion who was feeling his way past in the darkness. The pair did not linger long in their mutual embrace, but Elion’s subtle cologne may have left Gunnar with the wrong impression about who tripped over him.

Hearing various cries for help, from the North, and with the sahuagin passage in that direction temporarily blocked by fire, Barron and Leah made their way north. Barron was comfortable navigating his way through darkness, and found his way to the entrance. Seeing the sahuagin squads outside on the causeway, he pulled out his wand, and uttered the command word, changing one of the sahuagin into a giant spider. Chaos broke out immediately.