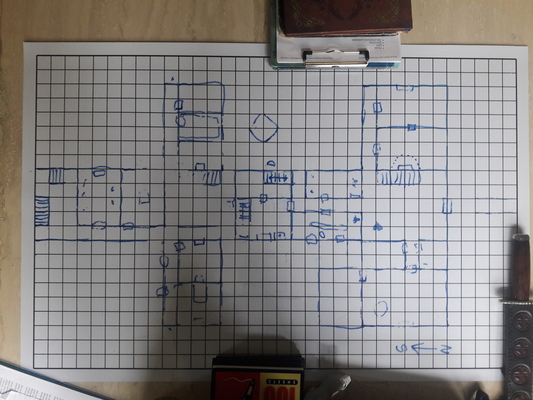 The adventure resumes where the last session left off. The party has finished their lunch while waiting for the monk to regain consciousness. After an hour or so, he did, and the party reentered the manor, resuming their explorations towards the back area of the first floor. The first room appeared to be a dining room, and was completely empty. The final set of rooms on the first floor consisted of a kitchen and a scullery, both in generally poor condition. The kitchen had a staircase leading up, and the scullery had a staircase leading down. The kitchen staircase was in poor shape and missing several of the steps.

The kitchen also had a sink, fireplace, and cupboard against one of the walls. When approached, a swarm of giant centipedes attacked from beneath and within the sink. Michael was in the lead and chose to retreat rapidly, with the rest of the party just outside the room waiting to attack as the centipedes emerged. This strategy was a success, though two party members suffered centipede bites and the resulting temporary weakness.

The monk successfully climbed the staircase and looked around, finding another staircase up (to an attic, perhaps?), and the second floor of the house. The rest of the party prompted followed, and the staircase promptly collapsed – doing 1d6 damage to everyone who failed a dex check. Thic Duc was impaled on one of the bannister supports and lost consciousness, but came to after the wound was bandaged.

Continuing to explore the second floor, the party located two mostly-empty rooms with chests. One of the chests was empty (and possibly had been emptied recently). The other was full of musty and moldy clothes, along with papers in a similarly useless condition. In addition to the chests, a moldy sack with some provisions (cheese, water) was found, and a set of clothes probably belonging to a female, some of which were purple. After careful examination, Michael declared the high heels to be “potentially demonic, or associated with servants of Lloth” due to their resemblance to garments used by their clergy. Or perhaps they are just high heels.

In the next room the party explored, they found a cupboard, inside of which was a fancy yellow cloak. Michael chose to search the cloak, disturbing the yellow mold, which released a cloud of spores into the room. Kristelle failed her save, and begin choking, eventually falling unconscious. A frantic search for remedies by the party members revealed that the mold could be burned away by fire, which resulted in frantic attempts to light torches, a mildly-explosive event as the cloud of spores burned to a crisp in midair, and an improvised smoke tent that finally allowed Kristelle to regain consciousness by burning out the spores.

In the next room, the monk used his spear to sweep the cobwebs away from the ceiling of the room before the rest of the party entered. He was attacked in legal self-defense by two giant spiders whose only motive was to defend their homes from the rampaging human. Being normally pacifistic civilian giant spiders, unused to facing adventurers, they died without a single successful bite.

Upon returning to Saltmarsh for the night, the party encountered a strange madman claiming that The General is actually a vampire. He claimed The General will be destroyed by sunlight or a stake to the heart, that he drinks the blood of basically everyone, that he must be stopped. But upon being questioned more closely over a meal, he admitted that he was being paid by the Rookroost guard to make these pronouncements. And paid well – he ordered the lobster. Several of his mannerisms and elements of his clothing suggest a history of acting. Asked whether he knew anything about a new open-visor policy in Rookroost, he denied it, but did recall the guards referencing something about a number on a list in regards to the job he was hired for. Come morning, he was gone.

Thus restored and fortified, the party returned to the manor to continue their explorations. Three rooms on the second floor remained unexplored, and the party continued to use aggressive SWAT entry tactics – kicking down the door and leaping into the room to attack. This went fine on the first room, where nothing of interest was found beyond a small hunk of crystal in the fireplace. As Michael leaped into the second room, however, the floor collapsed beneath him, and he fell through to the first floor, where the description (when carefully examined and re-read) revealed evidence of an unsound ceiling above. Oops.

The remaining door in the hallway was locked, but being less than sturdy, the party began to aggressively dismantle it. As their efforts finally concluded in a door smashed to splinters, the house shook, and a giant weasel fell from the ceiling above them to land behind the party.

Being a very bad-tempered giant weasel who had been in the middle of a very nice dream about a pleasant lady weasel just a moment before, the weasel naturally attacked Phil, the mage who had been leading from behind.

The mage cast shocking grasp – and missed with his touch attack. The weasel made short work of him, latching on to his throat with vicious giant weasel teeth. Blood and bits of mage flew everywhere. Kristelle saved his life by darting past the weasel and the unconscious mage into a nearby doorway, drawing an attack of opportunity as she did so; the weasel missed but had to stop attacking the mage to snap at her.

That didn’t help much, as the weasel landed a blow on her next round, and neither of the two party members close enough were able to land a blow in return. Kristelle fell unconscious, and as the weasel turned to Michael, Thic Duc dropped down the collapsed ceiling in a nearby room and began to race around to get behind the weasel… or perhaps to flee out the front door. During the next round, Michael missed again, and the weasel struck. Thic Duc advanced towards the staircase, listening for the sounds of a victorious party… or a victorious weasel.

Hearing neither, he returned to the scene of the ambush. The weasel was nowhere to be found, but the party remained, bleeding from their wounds and unconscious. after having bound the parties’ wounds and dragged them to the Mystery Machine, the monk tried (and failed) to sneak up on the final second floor room. He intended to investigate a rhythmic thumping noise. Within the final room, he found Daphne, tied up and gagged, banging her feet on the wall of the room, presumably to attract attention and a rescuer. 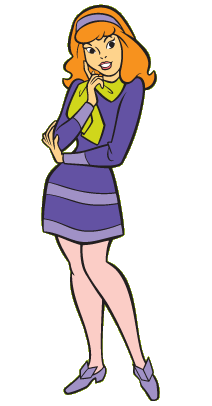 Without much of a chance to interrogate her thoroughly, she claimed she had been investigating the manor with her friends and some sort of beast, and that the “Mystery Machine” was her cart. No sign of her other friends so far. She’s willing to remain with the party until her friends are found, at least as long as the party is investigating the manor. She was also rather peeved about not having access to her food after being tied up for 24 hours, and would like to recover her actual clothes as soon as possible.