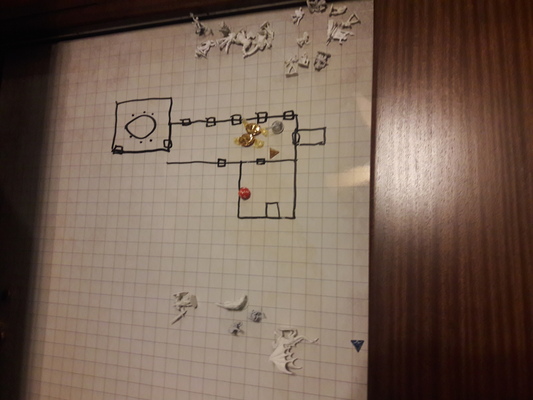 As we left the party, they had found rooms at the Rest In Peace overnight. In the morning, Mayor Neistor of Darkshelf was waiting for them in the common room of the inn. He waved them over to his table, recognizing them from a message Elena had sent, and provided them with a copy of his letter to her. They discussed rewards (100gp per slaver captured and slave rescued, 1000gp for finding and ending the slave trade ring if it is still in operation, and additional bounties for discovering and eliminating the cause of the strange noises and dead bodies). Neistor also revealed that he had previously sent an agent into the quarry, a man named Kwon, who had not contacted him in some time.

After some discussion, the party requested, and received, paperwork claiming they were authorized to audit the financial papers of the quarry. Neistor warned them that this might attract the wrong sort of attention from the dwarf Bazili, if he had something to hide, especially given the disappearance of the agent sent there previously. The party felt it was worth trying anyway.

They traveled to the quarry to first pose as buyers. Upon arrival at the guardhouse (a very impressive castle in miniature complete with drawbridge), they were escorted inside to a surprisingly comfortable waiting area while Bazili was located. The party immediately requested a chamberpot and used it. Aggressively. The guard at the gate called for “Grog” to empty it. After about an hour, Bazili arrived, accompanied by Glyrthiel, and the party was shown to a conference room to discuss their proposed stone purchase. After sizing up Barron, noting his odor and the generally well armed nature of his companions, Bazili inquired about the details and purpose of their purchase. Thic Duc mentioned it was a dock for Saltmarsh, which seemed to go over reasonably well. (“You are aware that the stone will not float?” “Yes, but if you sink several stones each on top of the other, beginning at the bottom and working upwards, a permanent structure can be constructed.”)

Then Barron took over the conversation. He mentioned a bank (“I would recommend marble, but we don’t have a source for that here”) and then a warehouse, and then limestone with gold trim. Bazili was growing noticeably more skeptical each time the story changed. Finally, he sighed and asked what they really wanted. The party immediately produced the letter from the Neistor and said they were there to audit the books. Glyrthiel muttered something under her breath that sounded like “You don’t look like lawyers. Or smell like accountants.”

Bazili stood up and called for a guard to escort them back to Darkshelf. The party cooperated at first, but ducked back into the waiting room rather than exit the building. After a moment playing peekaboo with the guards (“Knock knock” “Are you ready to be audited? No? Goodbye!”) Bazili made it clear that he was not going to play games and send in Lazlo the half-orc guard to do things “the hard way”. As soon as he did, Thic Duc backed against the wall and said the easy way was fine with him.

Most of the rest of the party agreed, but Barron mouthed off, and managed to avoid being grabbed. On his second try, Lazlo the half-orc broke his pinkie finger on the wall behind Barron. Ouch! This prompted Gunnar to take up his shield and bash Lazlo with it, clearly staggered the huge guard.

Shield bashes do 1d4 damage. Magic bonuses for the shield do apply, but so do non-proficiency penalties. Using a shield bash counts as your normal attack, unless you have a spiked buckler, in which case it can be used as a second weapon in your off hand subject to additional penalties. Using a shield to attack negates the defensive bonus for that round. House rules updated

Glyrthiel responded by casting a Sleep spell, which knocked Gunnar out. The rest of the party was not affected due to level. In addition, elves and half-elves receive a 30% resistence to sleep and charm spells. Leah, remember that resistance the next time someone casts either one at you, it might save you from making unexpected new wizard friends.

With Gunnar out, however, Barron decided the better part of valor was not to fight the enraged half-orc alone. The party was conducted back to Darkshelf without further incident.

The following day, they decided to explore the wilderness, looking for the locations where the bitten bodies had been found. They found the location where poor Nelli’s body had been found, and upstream from that, where she usually collected her drinking water. They also met two patrols on the way, simple country game wardens who watched for poachers and incoming hordes of orc or goblin raiders. The patrols agreed to accompany the party to make sure they remained safe during the search. An hour or so of travel upstream after that, they found a strange mark along the riverbank: a long, straight, depression in the sand and dirt, roughly perpendicular to the flow of the river Pelmyra.

The guards dismissed it as bear marks. (Their “do not take game” list includes lions, tigers, and something called an “ohmy”. And pigs, but they openly admitted not caring if people took pigs.) Thic Duc suggested instead it was a mark where a boat had been pulled up along the river. As soon as he voiced this idea aloud, the mounted guards moved to casually block the way further upstream and began herding them back towards Darkshelf with as much subtly as country game wardens can offer.

Barron and Leah conspired in thieves’ cant, with Leah mostly restraining Barron. Gunnar eventually spoke up, saying he dropped a holy symbol back upstream and could he go look for it? The guards sent one of their number away to look on his behalf and promised to meet them in Darkshelf tomorrow to help them look if the guard they sent back could not find it.

The party returned to Darkshelf without murdering the game wardens. The local peddler had a small holy symbol mostly matching Gunnar’s description (bronze, not gold, but Gunnar probably can’t tell the difference). They bought it, planning to show the guards they had found the item in the morning rather than exploring the woods with them.

Shortly after dark, the party went exploring again, looking for the ventilation shaft. After several hours of searching, they found it by identifying the faint column of heated air rising from within. (Very faint, as in, not dangerous, at least not from heat). They also found a black bear, which immediately embraced Leah in a clumsy but affectionate hug. Leah immediately killed it with two arrows from her bow, striking its brain through a weak point under the jaw. A painless death, and bear steaks for everyone.

Oh wait, what was that the game wardens said not to shoot?

We leave the party standing over the bear’s body, debating whether to butcher it for a barbeque immediately or descend into the ventilation shaft…