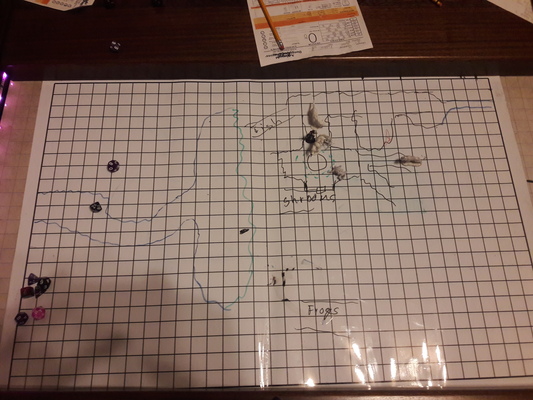 As we left the party, they had just killed a bear (definitely on the Do-Not-Kill list) nearby to the ventilation shaft running upwards from the mines. They spent the next few hours giving it a proper burial and hiding the evidence of their (very short) battle before preparing to descend the shaft and investigate near dawn. Leah noticed that the air flowing out of the shaft had a distinct scent of unkept humanoid they had encountered before – likely orcs, or something related. Definitely not dwarves, at least not judging by the stench.

Thic Duc made his way down the walls of the shaft, with the rest of the party hanging on to a rope just in case he slipped. Despite the walls of the shaft being moist with humidity, he made it down without incident. At the bottom of the shaft he found bars mounted vertically around the area where the shaft terminates, keeping anything human-sized that descended into the shaft captive. The bars were also thickly greased, making it difficult to climb back out. Around that strange prisonlike chamber was a slightly larger room with no notable features. A single corridor led off to the east. After looking around, noting a few dead animals, Thic Duc lit a torch and burned off the grease from one of the bars to make it possible to climb out and escape. The party returned to town without incident.

Deciding that they needed to relax, they took a nap and then visited the Bawdy Wench, which turned out to be as gawdy inside as the name might imply. The custom there was to rent rooms by the hour, and the propriestress Laura (a lady of truly stunning beauty, complete with 5-o-clock shadow and enough extra weight to match two or three of her employees) brought out her girls. Jenny, a rather attractive dark-haired woman (Charisma 14), took Thic Duc into a room for a massage and light conversation. Marissa (Charisma 10) claimed Barron (who gave his name as Wendel) for herself, falling for his long nose and wriggling crawfish. And due to the crush of business, Laura herself came out of retirement to handle Gunnar (Charisma 6). Charisma scores were rolled at the table and assigned to players in order from right to left

After spending a comfortable hour or two interrogating the whores at the Bawdy Wench, the party took a nap, waking up again at midnight to go monster hunting. They traveled upstream to where they had previously found the boat marks near Nellie’s body. The evidence they noted earlier – the boat marks, the tree branch the boat had been tied to – was gone, with obvious signs of removal on the tree branch. There were tracks leading upstream, but it was too dark to follow them reliable. The party decided to head upstream anyway, hoping to find something before dawn. They followed the river upstream for an hour or so until they came to a small waterfall, where Leah picked up the tracks they had tried to follow earlier, and Thic Duc noticed a cave opening behind the waterfall.

Marissa told Barron that Bazili Erzak liked to roleplay as an orc when in bed with her. He would talk in orcish and act uncivilized.

Jenny told Thic Duc that Glyrthiel rarely visited, but when she did, the other girls said she liked to be “commanding”.

Laura told Gunnar that she loved the experience and to come back soon. Also, Grognak, one of the guards at the mine, had some sort of non-human holy symbol with him.

Entering the cave through a wide passage in ankle-deep water, the party proceeded warily with Barron in the lead. Leah stopped suddenly as Barron approached a wider part of the passage, smelling something that reminded her of wet earth… just as three strange creatures emerged from water and advanced towards the group. They were the color of earth and the texture of stone, with greyish streaks like those of a tiger, but with the bulk of their body low to the ground like a crocodile. As Leah searched her memory for that they reminded her of, Barron fed them steaks, which the large one ate willingly while the rest maintained threatening postures. The tense standoff continued for a minute or two, with Thic Duc managing to gradually slip by the creatures along the side of the cavern. Gunnar tried the same, but the creatures reacted poorly, and a fight broke out. Leah’s arrows killed the first and largest of them, Thic Duc and Gunnar stabbed the other to death.. but each blow triggered an electrical shock through all of the party members standing in the water, and produced a strange effect on their metal armor and weapons. Anything metallic caught in the blast seemed to move on its own, tugging randomly in odd directions. (-2 to hit and damage for 1d6 rounds)

The jaws and teeth of the creatures seemed to be a match for the marks on the bodies.

After the creatures were slain, the party continued to explore, finding a small beach inside the cave with a boat tied up on the shore. They carefully levered the body of the largest creature into the boat, planning to take it with them, after an attempt to cut off its head resulted in more shocking experiences. After doing that, they examined the passageways leading away from the beach. There were three: one with tracks similar to sahuagin (webbed feet walking upright), one with mushrooms, and one with frog tracks. There were also remnants of whole frogs on the beach. It seems likely the mudtigers were eating them.

The party first chose to follow the passage with fish-man tracks. They found a room with a seaweed bed, similar to those they had seen in the sahuagin lair, and Barron’s infravision showed it was warmer than the surroundings. He approached the bed, and a fishy humanoid leaped out to defend itself. The party surrounded the creature and killed it, but not before it released some sort of toxic poison into the air (save versus breath weapon or 1d6 points strength loss for 1d6 rounds).

The next room had two more, which the party found out the hard way when they attacked from ambush, demonstrating some kind of camoflage power to attack Barron from behind. It also had a smaller passage continuing on ahead, from which came a stench that reminded Barron of something very familiar to him, but he couldn’t quite place it.

The party chose to turn around and explore a side passage before continuing further. There, they found a pillar, surrounded by mushrooms, with the floor covered in sand. Gunnar advanced into the room, noticing passageways to the left and right and a door at the far end. Barron followed him, and his foot was promptly caught in a noose, sweeping up off his feet and up towards the ceiling so that he dangled upside down. He drew his scimitar and slashed at the rope. Thic Duc used his spear to sweep through the sand, finding and triggering another noose trap. He made his way up the spear and began to cut it down.

Thus, it was Gunnar who noticed the mudtiger approaching from one of the other tunnels.

The party chose to flee, with Barron cutting himself down and landing on his head, and Thic Duc dragging the boat with the mudtiger corpse behind them as they ran out of the cave. 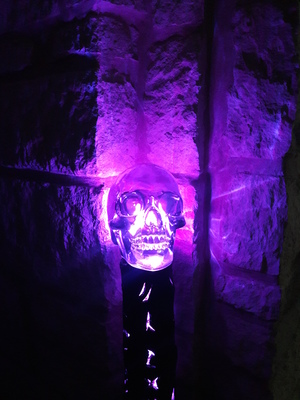