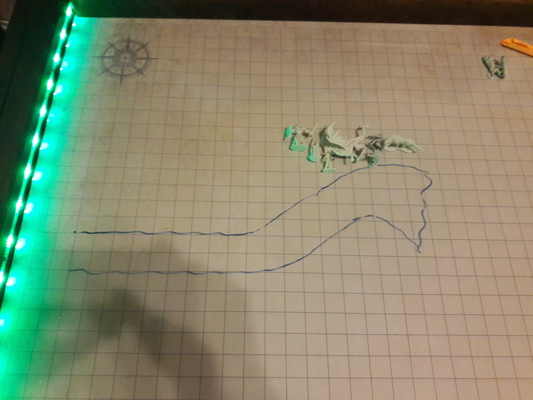 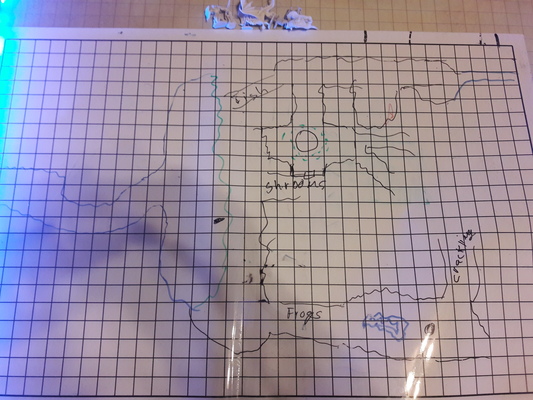 As we left the party, they were leaving the cave system conveniently hidden behind a waterfall. They made it about an hour towards town, towing the boat, before Leah heard hoofbeats coming from further downstream. Thic Duc slipped behind the boat and tossed his gear in to disguise the mudtiger, Barron and Gunnar pretended to be drunk, and Leah took on the role of designated walker. After a minute or two, another guard patrol rode into view.

The group tried desperately to sell their story of a drunken hunting expedition. It was not very convincing, but the patrol seemed content to herd them back to town… at least until they reached the path from the river back to town. The patrol tried to subtly separate them from the boat, while the party tried to subtly prevent them from being separated. The dance continued until Barron shoulder-checked one of the guards, tripping him. He fell on a rock, leaving him with a visible dent in his skull and clearly infuriated. The guard stood back up and drew his sword to attack.

The other guards were still trying to get the situation back under control. Thic Duc, still hidden near the boat, tried to keep it moving away. The squad leader grabbed Barron while his subordinate swung his sword wildly at him, missing. Gunnar tossed Thic Duc’s backpack back in the board, rocking it, and from his hidden spot Thic Duc dumped the boat over.

When the squad of guards saw the body of a mudtiger, their leader screamed orders to “kill them all”. In the ensuing melee, the enraged guard accidentally killed his commander, and Leah put an arrow into the back of Gunnar’s head. Oops.

The party piled the bodies into the boat, cleaned up the crime scene, and fled downstream to discuss their options. Eventually they decided to bury the patrol’s bodies in a shallow grave, send Gunnar back to Rookroost to make an insurance claim (with Elion handling the paperwork), and show the mayor of Darkshelf the mudtiger corpse. While doing so, they met Warin, a novice cleric bored of hymns and seeking adventure. Barron promptly scammed him of 20gp to allow him join the party. Warin had a vague feeling of unease about the whole transaction, but it would all be worth it once he was out in the world smiting things and taking their stuff. Or whatever adventurers do.

With Elion sent off to Rookroost, and Thic Duc meditating on his experiences, the remainder of the party set off for the cave system again. They chose to follow the path with many small frog footprints, which led to a small natural cavern with a hot, bubbling pool in the middle. The atmosphere was filled with sulfurus steam. As the party approached, two small (fist-sized) frogs leaped towards them.

Leah reacted instantly, shouting the command for Pyro to attack while pointing into the room. Eagerly, Pyro lept forward, sailing over the heads of the frogs as if he hadn’t even noticed them (natural 1), and landed in the middle of the cool, refreshing hot and sulfurus pool. Ouch! Pyro woofed that he was definitely leaping out of the pool next round.

More frogs rapidly appeared, engaging the party’s front line of hirelings. Two launched themselves at the throat of the same man-at-arms, biting and clawing their way into his armor. He collapsed screaming. Leah begged for the second to get her dog out of the water, while she shot arrow after arrow at the tiny hopping targets.

The second man at arms made it to the pool of scalding hot water, managing to drag Pyro free of the heat before collapsing under the wave of attacking frogs. The last of the hirelings moved forward to engage the frogs, while Leah’s frantic defense first impale a frog on the end of her drawn arrow, then shot the arrow – with the frog – into yet another of the deadly amphibians. Barron swung wildly, the precise strikes that served so well against human targets doing less well against creatures with a very different anatomy.

Finally, Leah’s arrows took their toll, and the last of the frogs perished. One of the hirelings had died, and another came close. They were both re-evaluating the idea of “Let’s go have adventures, it will be fun!” Pyro had seen the great fetch-stick in the sky, and returned with a new outlook on life. Only Leah escaped with just a few scratches, though Barron and the last man-at-arms were not badly hurt, and the frogs had mostly ignored Warin as he bandaged dogs and men.

With the battle over, the party explored the room. There were two additional exits, and one of them was producing odd crackling noises. Warin felt a strange sense of danger from that room… Leah found odd tracks, mostly human, but with claws.

With little to show for their venture into the caverns, but confident that at least there were no more frogs in that particular room, the party returned to town. Barron went through their possessions and sold some of them, hoping to make room for more and perhaps fund further hirelings. Warin felt another warning when Barron considered selling a scroll of protection from undead, so they kept it.