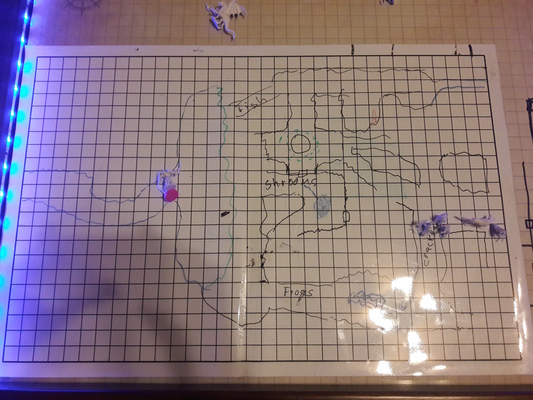 As we left the party, they had returned to town after their near-death experience with the killer frogs. After spending the night in the inn recuperating, they woke the next morning to find the town filled with wanted posters. The posters had a reward offered for mudtiger heads following the slaughter of a band of game wardens, and suggested that there was a possibility humanoids were involved due to wounds on the bodies (some from an arrow, some from swords or knives, in addition to bites from the mudtigers).

The party gathered at a table in the local inn. The mayor of Darkshelf, Nielor, gathered his new monster-hunters together with the existing party members and summarized the situation. After asking a few questions, the now-larger group set off to challenge the mudtiger lair. They arrived at the entrance without incident, and proceeded inside – getting soaked despite their best efforts to avoid the waterfall.

The party made their way to the beach, examining again the three passages deeper into the caves. They chose the path with mushrooms to begin with, finding a cave with two doors, a third passage leading south, and a pool of water lit by a lamp. Amathar used to sling to throw a stone at the pool, which promptly formed into some sort of watery snake creature and dragged him towards the pool. He was pulled in, but another party member dragged him out. Several other party members were grabbed before one had the idea to dump oil into the pool and light it on fire. Now, everyone attacked by the strange creature was being burned alive while they drowned.

Finally giving up on dealing with the watery creature, the party retreated and explored the passageway leading to the killer frogs. They found a single surviving frog, and Amathar wounded it with his staff almost immediately. Amathar remembered that creatures similar to mudtigers often view frogs as treats, tasty dietary supplements, and a quick poll revealed that various party members had hooks and rope, so… the party went fishing for mudtigers.

They tossed the rope, hook on one end, bait (frog bits) on the hook, down into the corridor and dragged it back while Leah imitated frog mating calls. Before long the rope went taught! The party arranged themselves into an ambush position with missile weapons and prepared to receive the mudtiger. As the beast was dragged into the room and Leah’s arrows began to take their toll, Pyro suddenly yelped as if something had struck him – and the sound of claws in wet sand came from behind Leah. Something was charging the party! Leah got a shot off – but the creature, reeking of death, clawed her in return. The horrid stench at such close range paralyzed the ranger in place, with Pyro behind her to avoid her arrows and thus unable to protect her from the claws and teeth of the undead.

Fortunately, Warin felt his holy calling and stepped forward, holding a giant golden question mark high, and began the chants of power that his church leaders swore would drive back the undead. He felt the holy power rising within him, and faintly from behind the sound of Barron reading a scroll aloud as well… and his uncertain faith was bolstered as the filthy creatures fell back, unable to reach him or Leah! All those long years of study, finally paying off! This was the power of God!

While Leah and Pyro were beset by the living dead, the mudtiger was attacking those nearby, and a fish-man stepped out of the shadows to attack as well! His first spear thrust missed, but his fishy strench was making those close to him weak with nausea. And each blow to the mudtiger next to him send a jolt of lightning through all of those nearby as well, making their armor and weapons feel strangely resistant to normal motions.

Gradually, with the undead held back by Warin’s chants (and perhaps a little help from Barron), the tide turned. when Leah recovered from her paralysis, she put an arrow all the way through the mudtiger from snout to tail, and the shocking death throes killed the fish-man. The same shock nearly killed Amathar and Seb, who crawled back towards the entrance, desperately trying to live to fight another day. Another mudtiger quickly took its place, but fell much more rapidly.

With the party’s full attention on the ghouls, whose claws could no longer reach the living, they retreated in a display of animal cunning. The pursuit spread the party out a bit more, and even more ghouls emerged from the shadows – but the party regrouped quickly and made short work of their opponents from the advantage of their magical protection.

As Leah, Warin, and Barron finished off the rest of the undead, the wounded party members – some of them perhaps reconsidering their choice of career! – crawled towards the exit. We will open next session back in town without further incident, having turned in the mudtiger heads. 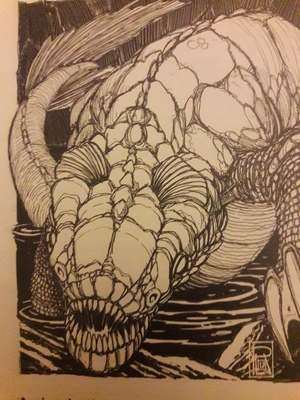