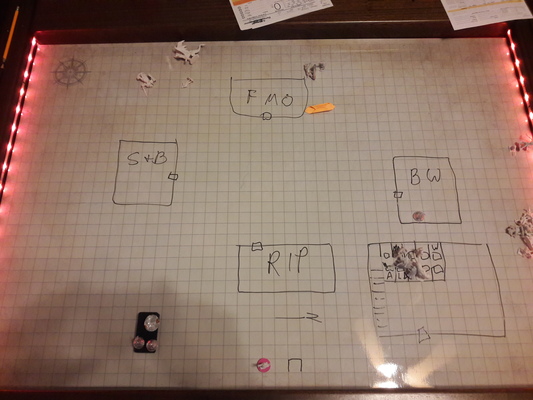 As we left the party, they had returned to town after their near-death experience with the killer frogs killer frog, mudtigers, ghouls, trogolodytes, and more mudtigers. An argument broke out at the Mayor’s at the Rest Inn Peace as Barron started to sweep all the gold off the table into his pouch. Seb, Norsk, and Amathar objected, insisting that the gold be divided immediately. They each took their shares. Norsj and Amathar took rooms at the inn and Seb slipped away into the night. A half-orc named Molag introduced himself, volunteering to help with the investigation. He said something about looking for someone, too. With all of that taken care of, the party retired to their rooms to rest and recuperate.

The party woke to a crash and stuck their heads out of their rooms all at once. The door to Amathar’s room was standing wide open! A strange man emerged carrying the unconscious elf over his shoulder. A moment later, a humanoid fish creature emerged from Norsk’s room, with the similarly unconscious half-orc over his shoulder. The two headed rapidly down the stairs. The party pursued, after taking a moment to grab their weapons. Leah led the way, followed by Pyro, Barron, Molag, and Warin.

The human made it out the door while the fish-man was having trouble with the stairs. Leah swung at the fish-man with her sword, inflicting a minor wound, but the cry of pain made the human turn around for long enough to shout “Flee!” to Leah. She felt a magical compulsion to do just that, but she was trapped between the fish man in front and Pyro behind. The only way out was over the side of the stairs and down into the common room, so she jumped… and landed feet-first in a barrel of ale.

The rest of the party continued the pursuit down the stairs, Barron slicing ineffectively with his daggers, Pyro following Leah into the common room. Warin and Malag made their way down the stairs more slowly, after Malag tried to throw himself through the thin walls of the inn’s sleeping chambers… and failed, leaving a half-orc-shaped impression in the wood.

With Leah and Pyro distracted, Barron was the first to make it out the door, followed shortly thereafter by Warin and Malag. They saw the two prisoners being loaded into a cart pulled by some sort of wolf-like beast, but before they could act, two more fish-men emerged from the shadows on each side of the door and attacked… each other? Perhaps someone’s fin slipped at the last minute. Despite that disastrous mishap of an ambush, compounded by the human spellcaster targeting the wrong creature with a spell, the two fish-creatures delayed the party long enough for the cart with their friends to escape, though the ambushers lost their lives in the process.

Witnessing their strange camoflage powers, Leah had a moment of inspiration and realized that these fish-men were trogolodytes, not sahuagin. Hey, all the fish-men look alike to the surface dwellers!

The party decided their next step would be to interrogate the whores for more information on Bazili, hoping to identify some guards that would turn a blind eye to smuggling people in. They also learned that the quarry workers ride to and from the on a regular cart-trip, usually with at least one officer along, sometimes Bazili himself about once or twice a month. They made arrangements to talk to some guards who might be slightly corrupt, but plans quickly changed when Laura mentioned that Bazili was here right then.

The party arranged themselves into an ambush outside the Bawdy Wench, waiting for Bazili to emerge. Malag and Warin positioned themselves in plain view, with Barron around the corner of the building near the entrance, leaving Leah and Pyro in the distant shadows within easy bow range. As dawn’s early light began to appear, a strangely familiar cart drove up the road from the quarry, pulled by a tired-looking horse and driven by a guard in the quarry’s very rough sort of uniform.

Malag waited for the cart to arrive at the door of the brothel, and the inhabitants of the place began to emerge. First was another guard, who climbed into the cart, followed by a short half-orc. Mistakening the half-orc for Bazili, Malag yelled dire insults in the orc tongue, provoking the creature. But as the half-orc made to charge at Malag, Bazili himself emerged from the whorehouse and offered a restraining hand. “Don’t let them get to you,” he said, and for a minute or two that was enough to calm the half-orc’s rage as Malag switched targets to Bazili.

The strangely misshapen dwarf had powerful self control or an utter lack of understanding of the orcish language, however, and climbed into the cart without incident. Another guard began to emerge from the whorehouse as Malag continued his insults, and the half-orc already in the cart jumped down and charged at him. The pair fell into a bloody fistfight (forcing me to use the grappling rules, subcategory “pummel”) as Bazili ordered the cart to drive off, with one of the guards taking potshots with his bow at Malag.

Barron emerged from his hiding place behind the corner and pushed the guard inside, where they spent a pleasant interlude wrestling on the floor (forcing me to use the grappling rules again). Eventually he submitted, and Barron interrogated him with the help of Marissa and their favorite shrimp.