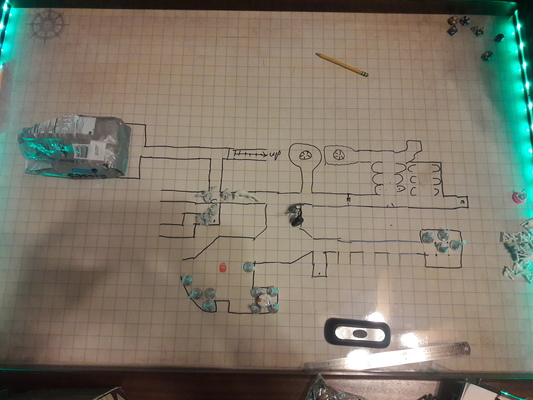 As we left the party, they had followed the tracks from the abduction to the quarry, then returned to town to attempt an ambush on Bazili. The ambush failed, though the party was able to interrogate one of the guards who was left behind, and managed to kill a half-orc who was provoked by shouted insults into attacking.

Thic Duc returned from his training and meditation to find Leah and Pyro at a table in the Rest in Peace, smelling strongly of alcohol and on the outside of most of a bottle of tequila. He sat down at her table, and the sight was enough to bring her back to something like normal awareness. The two of them caught up on events while the rest of the party slowly trickled in. Nigel joined them once he had recovered a bit from being shrimped. Barron restocked his supply of meat and joined them, while Warin prayed to recover his spells before pulling up a chair.

The party decided their best plan was to slip into the quarry via the waterfall cave. Nigel knew the layout of the keep, but wasn’t familiar with any places where prisoners might be kept, so the logical place for them to be stored was in the lower levels of the quarry. Barron took a second look at his collection of maps and realized the caves were close enough to the quarry that they might have a connection somewhere under the surface, although the hilly terrain and the way the river curved was enough to make that less than obvious.

Leah, in turn, connected the fish-men who attacked them in town as the same type of fish-man they found in the caves. That told the party which passage was most likely to lead them to their friends. The party traveled to the cave system, followed the path marked fish, and continued deeper into the cave past the point where it narrows. Beyond that point was a chamber filled with garbage and refuse. It stank to high heaven, but the party entered to take a look around, and discovered a shaft in the ceiling – presumably where the trash is dumped.

While the party watched Thic Duc climb the shaft with a rope – noting Barron’s odd reluctance to do the same – the pile of trash between them began to move. Zombie hands emerged from the garbage, followed by the rest of the zombies. One of the hands grabbed Barron’s ankle, and he screamed in terror.

Meanwhile, Amathar was waking up from being knocked on the head. He was chained to a wall across from another prisoner, and surrounded by even more prisoners in rags. Chained across from him was a man named Kwon, who took in Amathar’s robes and wizardly garb and asked if he was an adventuring type willing to help in an escape. They discussed their mutual plans and goals, and half-planned an ambush on the guards (thanks to Kwon’s ability to pick the lock on his manacles). Their discussion was interrupted, however, by a sudden series of screams coming from somewhere nearby but out of sight. Kwon remained to watch for the guard while Amathar followed the sound to a shaft leading down below. From the stench, a makeshift sewage shaft. He approached the edge and peered down into the darkness.

While Thic Duc crept towards the top of the shaft, the rest of the party fought the zombies. Barron struck the first blow, chopping off the hand that had grabbed at his ankle. The hand began crawling up his leg. Leah shot an arrow at another zombie, plugging it right between the eyes, but it seemed almost unhurt. In frustration, with much cursing, she throw her bow into the air and up the shaft, where it hung in slow motion for a moment. Down below, Pyro had bitten deep into a zombie’s leg, and turned back to look at his mistress in disgust at the taste of this dead and rotting creature. His canine eyes caught her emotion-wrought face, her outstretched hand and arm, the long, wooden object flying into the distance… I know this game!, Pyro thought to himself. This is Fetch! Much more fun than biting nasty zombies! And with his tongue lolling out of his mouth, Pyro leaped on the shoulders of the zombie he had just bitten, then from there to the shoulders of another higher up on the refuse pile, from there to Thic Duc’s shoulders still climbing the shaft, and from there, Pyro launched himself eagerly after the Stick he was meant to bring to Leah…

Standing above the garbage put, where the pitch dark concealed most of the activity, Amathar was trying to make sense of the noises when suddenly a longbow flew up from the pit below. It looked strangely familiar. Distracted by the incongruous archer’s tool, Amathar was even more startled when Pyro seemed to levitate out of the pit with the very last of his momentum, clamping his jaws on Stick For Mistress. Luckily, you don’t get to be a wizard without thinking quickly, and Amathar grabbed the fierce wardog in a friendly hug, pulling him back (with Leah’s Stick still in his jaws) onto the floor around the shaft.

Meanwhile, Thic Duc had climbed to the top of the shaft, evaluated the situation, lit a lantern, and loaded his crossbow.

Warin called on the power of his (as yet undecided) god to drive back the undead, and got a solid punch in the face for his trouble. He stagged back, wounded but still in the fight, until Thic Duc’s crossbow bolt from above missed the zombie it was meant for and split his head open. Warin collapsed, unconscious and bleeding. Later, he was heard to remark that this fight in particular taught him valuable lessons and increased his understanding of the divine nature… specifically, not even the gods like a playa!

Nigel wound up with his borrowed longsword, determined to make up for his earlier mistake with the seaweed. Experimentally, he swung the sword a few times through the air, feeling it’s weight and heft, and then swept the blade into the guard position, point directly at the eyes of the zombie slowly stumbling towards him. Preparing to thrust, Nigel’s eyes dropped to the flat of his blade, where he saw the same embossed logo that was on his own – now broken – sword! What the hell? Why does this band of misfits have a quarry guard’s sword? His shock was so great that he dropped the blade. After a moment to recover his wits, he picked up the sword and finished off a wounded zombie.

With the last of the zombies finished off, the party made their way up the shaft. In the confusion, Malag searched the refuse pile and pocketed a pouch containing a mysterious pyramid carved with eyes. With Kwon’s help on the locks, they managed to free three dozen prisoners, sending them down the shaft again to follow the way out they had just cleared. Their companion Norsk was among the slaves, still wounded. Amathar and Norsk left with the prisoners to escort them back to town while the party continued to explore the caves.

Two furry, large-eared, barely-civilized humanoids guarded the way out of the prison. The party managed to ambush one, but the second was ready for them. It didn’t help. The small nesting area the guards used as a sleeping and mating area contained three silver urns, one still warm from holding hot coals. Of the other two, both appears filled with ash, but pouring out the ash revealed a stash of 300 gp in one of the urns.

Exploring further, the party found a small group of goblins working some sort of rock or quartz mine. Malag seemed to have some authority due to his half-orc intimidating nature, and (with the help of Nigel’s guard tabard) convinced the four goblins to begin weakening the ventilation shaft with promises of gold and beer. One beer. Two beer. Many many more than two beer! Infinite beer.

The party then discovered a goblin nest, and escaped death by pretending to be overseers. They continued to explore down the only remaining corridor, locating another garbage chute and a large mining operation populated by an uncountable number of goblins. Warin tripped over a secret door (literally). Within that hidden chamber were two living spaces, one occupied by a snoring human who appeared very familiar… he was the man who led the fish-creatures that attacked earlier and kidnapped their friends!

Making no attempt to move quietly while Warin stomped around just outside the door in full armor, Barron threw a dagger into the sleeping man’s shoulder. He woke, screaming in pain and surprise. Barron finished him off with a second strike, but the damage was done – the pervasive tool noises had stopped. All hell was about to break loose.