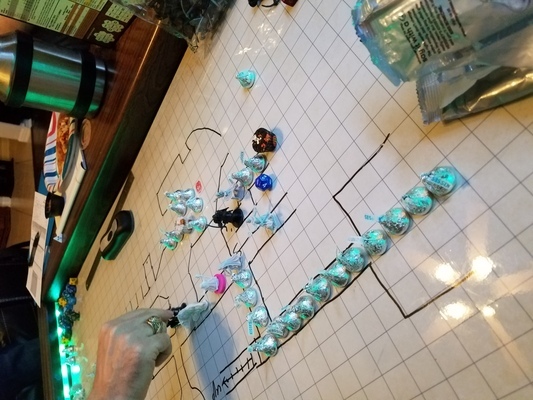 As we left the party, they had murdered a presumably evil cleric in his bed, and his death cries alerted the rest of the level to their presence. The mining noises to the north had stopped, and the goblins were coming…

Leah and Warin were already well positioned. Leah could cover the unexplored forward corridor as well as the mining passage with her bow. Warin could use his healing spells, and switch off with her if they needed to cover two fronts in melee. Soon the pair heard the rapid tread of goblin feet headed in their direction, and the growl of approaching mudtigers from another.

Leah took careful aim at the charging mudtigers, loosing two arrows in rapid succession. The mudtigers fell almost as one. From the distance, a human voice was heard to yell “Oh, shit!”, and a vaguely defined shadow ducked behind the wall out of sight.

While the faint sound of chanting filled the air nearby, Leah turned her bow towards the goblins approaching her position from the mining operation. After clearing the corridor with a hair of arrows, she caught a motion out of the corner of her eye and spun to shoot at the cleric who had darted across the corridor entrance while she was looking away. Her first arrow glanced off his armor, leaving a mere scratch. Her second shot never came – her quiver was empty! Cursing, Leah put her bow away and drew her short sword. The next wave of goblins would be up close and personal.

Barron and Malag continued to loot the chamber they had found. Barron found a chest under one of the beds along with papers and books before Malag was forced to step forward to deal with approaching goblins. The goblins had little success, mostly dying as soon as they came within reach, until a mysterious evil cleric began to support their attack with spells. Malag was first commanded to sleep, which took him out of action for a round, and then felt a terrible fear that compelled him to flee. Barron, however, was able to kill the priest with a thrown dagger, and finish off the last of the goblins. He heard a solid thud from behind him as Malag tried to make a hole in the secret door – and failed.

Barron proceeded to the corpse of the cleric and tried to behead it with limited success, “playing the violin upon the neck of the corpse” until Malag, recovered from his impact with the door, ripped the head off the body with his bare hands. (In the distance, someone screamed “Fatality!") Barron immediately seized the head, screamed “Give me your magic!”, and gave it a sloppy kiss. Or perhaps tried to suck out the cleric’s soul. Could be either one, really.

Nigel and Amathar continued their negotiations with the goblins. The goblin king allowed the party peaceful passage but was unable or perhaps unwilling to call off the other group. The pair moved closer to Leah, still holding her own with a bloody short sword at the intersection point. They could overhear faint voices in the goblin tongue…

For a brief moment the slaughter paused as the lead goblin dropped his dagger and ran back to the end of the line. Then the bloody queue resumed.

Checking under the other bed in the sleeping area, Barron found a second chest. Both chests unlocked with keys from a keyring in the desk, and contained gold and platinum coins, several holy symbols, and 6 strange potions or vials of two distinct types.

By this time the word among the goblins had spread through the line, and Amathar was able to negotiate a temporary peace with them. Both groups of goblins claimed to just be miners. They were there to quarry stone, and weren’t especially happy about it. They told the party that a half-orc named Brobnak was in charge of the slaving operation, and that he came from “above”.

Having negotiated peaceful passage from the goblins, the party proceeded into a larger room. This room contained a stone structure, perhaps an altar of some kind, dedicated to a dark god from the elemental planes. It was built in the shape of a narrow pyramid, with a jeweled eye near the top.

Barron promptly tried to steal the eye, and was flung back against the wall. He survived, but only because he was expecting a trap. A lesser man hobgoblin might well have died on the spot.

In a small nook off the temple area, another desk with a set of ledger books was found.

The party collected the mudtiger heads, examined the map to confirm they hadn’t missed anything, discovered they had missed something, and decided against jumping down the second garbage chute to find out what it was. The next step was to continue upwards, hoping to find a way out, or proof that the caverns they were exploring were actually connected somehow to the quarry they were supposed to be investigating.

On the next level up, they found human workers with hammer and chisel and pickaxe breaking large blocks of stone from the walls of a large, open cavern. They set up an alarmed call about a troll coming up from below, and the workers fled. Guards in the uniform of the Darkshelf quarry soon arrived, with three of them heading down to deal with the troll, and one remaining with the party to “escort them out”.

Somehow, on the way out the party managed to distract him long enough to find two more guard uniforms. They now have a total of 4 quarry guard tabards. On their way out of the quarry, they had the chance to view the inward-facing side of the keep for the first time. Below the keep proper, set into the rocky hill on which it is built, are two large entrances, each fitted with a pair of large doors. The doors appear sturdy, but crude, similar to those used on barns.

Back in town, they presented their findings to the mayor, along with the mudtiger heads and the ledger books. Nielor promised to review them overnight and determine who was involved, and did so; the leader of the slavers appears to be a half-orc named Bubgrok. The name is not familiar to Nigel. Kwon heard the name used often, but never saw the person it referred to. Bubgrok is reported to have traveled with slaves for sale, according to the ledgers, so there must be at least one other person in the quarry hierarchy who can run the operation in his absence.

Bubgrok, or his second in command, must be identified and captured alive for interrogation. That will allow the rest of the slaver network to be identified – or at least the next link in the chain. The interior of the keep must be searched for more slaves, and any found rescued. Any evidence linked to the evil temple below or its clerics must also be uncovered, and the temple itself destroyed, along with any surviving servants of that dark and cruel diety. Any guards who knew of the slaving operation in any detail must be identified and purged – voluntarily or otherwise. Those who surrender should be allowed to live and face justice.

Because the party left the quarry openly, without any record of their having entered, it is likely the slavers will assume their operations are completely compromised and either send for help or attempt to escape. There is thus no other choice: the keep must be breached, and quickly, before evidence can be completely destroyed, and before help can be summoned in sufficient numbers to overwhelm the party and the town guards.

Nielor is willing to sign a warrant ordering the guard to stand down and allow the party to search the keep, but it seems unlikely such a document would be honored at this point.

In the event no further clues are discovered, Nielor informs the party that the next link in the slave trade chain leads to Highport. Without names and places, though, this doesn’t offer much of a starting point for an investigation.