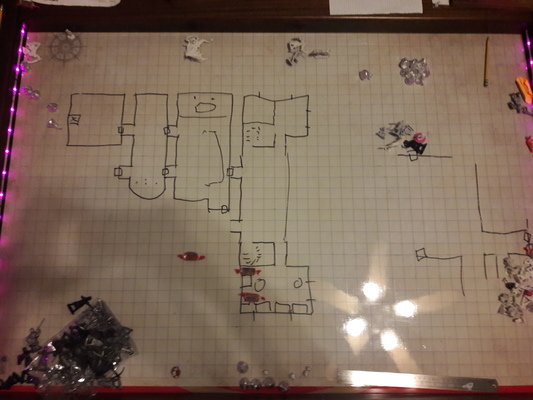 As we left the party, they had spent the night in Glyrthiel’s room on top of the quarry keep. Bazili was still with them (still charmed). Glyrthiel was either still unconscious from her injuries or faking it well. The day begin with the group receiving a message by courier from their favorite guildmistress, with a wedding invitation attached. The next order of business was to finish exploring the keep.

The top floor of the keep contained quarters for slaves and two bugbear overseers. The bugbear quarters were empty, save for 50gp in gold; they turned out to be with the slaves, guarding them after the fighting earlier. After some negotiations, and with Bazili’s help, they agreed to new employment contracts and Barron sent them to look for Mr Crackers. The slaves were freed, and accompanied the party, but seemed mildly skeptical after some comments implying that they would be put back to work in the mine later, only as “employees”. Most of them had been captured sailing the Nyr Dyv.

Amathar asked Bazili about the profits from the slave trading operation. He said Glyrthiel handled the finances. The party returned to her room, where they had already looted the obvious valuables, and proceeded to smash her bed, desk, table, and chairs, finding nothing more than what they already had. They were rolling up the rug and tearing down the tapestries when Bazili said she had mentioned investments, including nice furniture. Oh well. At least the rug and 8 tapestries were saleable.

The next stop was the goblin den next to the stables, accessible by the stairs or by secret door. More negotiations ensued, and the worg riders were sent with a message to Castle Greyhawk, paid with a few copper and weeks worth of iron rations. The rest of the goblins were told to enter the quarry and work as miners, but they did not accept that idea. Eventually Barron agreed to enchant their weapons and sent them into the quarry to take heads. They left, but not happily, after Barron pretended to enchant their weapons.

No one bothered to check on where they actually went. Instead, they dug up the goblin clan’s treasure – hidden under their cooking fire – and loaded it into the cart along with the rest of their loot. The party then drove back to town to spend the night and collect the mayor’s 500gp reward for exposing the slave ring and 150gp more for the rescued slaves.

While Warin and Malag took the time to train, with Barron studying more magic under Amathar’s (“Magic does not work that way!") tutelage, and Warin also researching what would be needed to destroy the evil altar they had found, Norsk traveled to the local church and paid 10 gp for research on how to remove a Water Weird. It turned out Warin was skilled enough to perform the purification rite (Purify Food and Water, a simple 1st level spell).

Returning to the quarry, the party journeyed to the altar. Warin hemmed and hawwed about how to destroy it, despite his research. Instead of casting Ceremony with the appropriate trappings, he followed the advice of the party to re-memorize bless and cast that instead. Then, he picked up one of the stone maces used by the evil clerics, and used it to smack the centerpiece of the altar. Once, he struck. Twice, he struck, and felt a surge of dark power. Thrice, he struck, and the gemstone fell out… while the altar itself began to spin and twist, reshaping itself in geometrical patterns offensive to logic, faster and faster and faster until it was only a blur. Slowly, a portal formed in its place, and three mudtigers appeared within the room.

Warin immediately attacked, doing damage but taking a shock in return. He was bitten as well, but for little damage.

The rest of the party, who had been watching the attempted destruction from a safe distance, moved towards the fight.

The mudtigers missed Warin next, and he missed them. Malag was now close enough to attack, and nearly beheaded one of them. The shock damaged them both, but they were not deterred.

Thic Duc approached, discarding his spear and striking with his bare hands to try to avoid the shock. He avoided it instead by missing. Warin reversed his mace to strike with the wooden handle, but also missed. Malag killed his original mudtiger and moved closer to the second, wounding it also, and shocking everyone. Another blow from Barron’s daggers finished it.

Amathar tossed his staff to Leah, who caught it perfectly and pole-vaulted her way onto the last of the mudtigers, landing on it with both heels and dropping casually into a reversed riding position (natural 20 on attack roll, but 2 for damage). Barron moved up next to her, looked her in the eye, whispered “I’m sorry”, and stabbed her (natural 1, aiming for the mudtiger, and intending to apologize for the shock effect. Oops.) Leah was not badly hurt physically, but emotionally devastated. It all seemed too deliberate.

Malag killed the last mudtiger, but Leah and Barron barely noticed as they stared at each other. Warin was staring into the portal, arms raised in some kind of mystic gesture. His mouth was moving, but no sound came out. Almost everyone was watching Barron and Leah as Warin finally recovered from his communion and lowered his arms, a strange and distant look upon his face.

No one remembered to close the portal.

Warin did not mention anything of what had happened. He did notice that written on the handle of the shattered stone mace was the word “Keymaster”.

The party traveled to the waterfall cave entrance, opened the door to the chamber where the Water Weird lived, and Warin performed the appropriate magic. Malag slapped the water with his sword, and it did not react. Victory!

With the room now safe, the party was able to notice a subtly hidden exit to the south, leading to a ramp upwards. They chose to leave it for later, and instead moved west, towards the unexplored areas on that level.

The next room had a shallow pool of muddy water in the central area, along with a breeze that carried a faint stench. Following the breeze, they moved through the room towards the exit, with Barron stepping into the pool to do so. His legs and feet were attacked immediately by a swarm of vicious baby mudtigers. Barron immediately leaped out of the pool, and the party commenced killing mudtiger babies. After a few minutes they grew bored and decided to burn them later, using the oil in the omnipresent oil lamps lighting the area.

They found a second garbage pit, covered in fungus. This confirmed the impression that they had earlier, that their maps were a little bit off. Barron grabbed the oil lamp he had been planning to use on the mudtiger babies, backed away from the garbage pile, and … proceeded to slam dunk the lamp into the pit as he tried to burn it (natural 1 trying to throw the lamp). The weird fungi burst into a cloud of airborne spores. Barron hacked and coughed as he stumbled out of the room. Norsk was able to identify the fungi as bearing a dangerous disease, and the yellow potions the party had found earlier as likely being a treatment for it. Barron immediately drank one.

Beyond the second trash heap was a charnal complex, an ancient burial ground of some kind, filled with skeletal remains in small wall niches. Barron removed a small bone from one of the tombs; the skeleton animated and prepared to attack, but Malag killed it with a single blow. Warin then attempted to turn the skeletons. Instead, four of them animated themselves and assembled in ranks.

Warin looked confused. The rest of the party discussed this among themselves, and asked Warin to do it again, so he did.

Now armed with 8 skeletons, the party requested Warin order them to do the Monster Mash. He complied, and so did they.

The only thing that party could think of doing with them was to run them several of them in circles around the tower with rope traps, hoping to disarm those traps. They succeeded in hanging several of the skeletons from the ceiling as chandeliers, but nothing else.

With the remaining skeletons in the lead, the party climbed the ramp they had found earlier, leading upwards. They head goblinish shrieking from above as the undead advanced, and as Warin emerged into the room behind his skeletal army, the goblins fled in terror. All save their chieftain, who advanced on the party.

Barron cast his first ever real spell, and the chieftain fell asleep. The party searched for, but could not find, a secret cache of valuables near their fire pit.