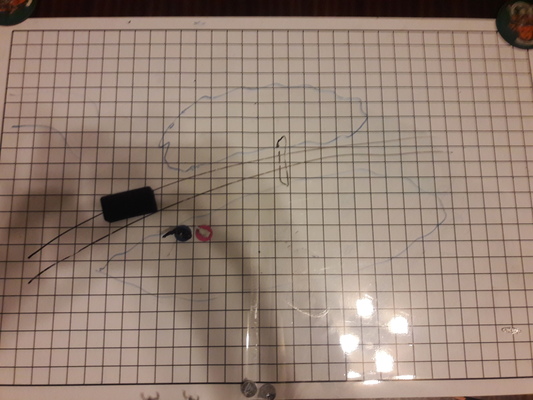 As we left the party, they decided to explore the guest quarters in the keep at Darkshelf. Some of the party had been there before, posing as buyers, but they figured it was best to clear the area fully before considering it safe. There they met Daelyn, who had been locked into one of the guest rooms when the keep went on lockdown. Barron demanded payment in gold before opening the door, but did not receive it when Amathar opened the door promptly upon hearing the captive was a fellow elf. Daelyn introduced himself to the party as a friend of Glyrthiel, which did not go over quite as well as he anticipated.

From there, the party dropped left Glyrthiel and Bazili in Darkshelf to be tried and likely executed. Daelyn stayed in Darkshelf to help with her defense after a quite side trip to Rookroost. And as the party traveled from Darkshelf to Rookroost, their journey was briefly interrupted by two bugbears running after the small cart, waving a … dead and rotting plucked chicken? The newer party members looked on in confusion as Barron greeted the new arrival. Leah drank from her flask and Thic Duc assumed a meditative mein. (The bugbears had a 15% chance of finding Mr. Crackers, and rolled a 13.). The bugbears were send on a second mission to acquire proper feathers for the bird, at which they also succeeded (Rolled a 28 on a 30% chance).

In Rookroost, Barron sold a gem taken from the underground temple. Amathar, Warin, and Leah spent time training their skills, with Amathar also spending time negotiating with the wizard Jim at the sage’s tower. Though Jim was familiar with some members of the party from a prior encounter, he was not familiar with Amathar, so the exchange went without a hitch. Amathar received Invisibility in return for Unseen Servant. And the tower was cleaner after they left. Thic Duc, Barron, and most of the rest of the party combined their accumulated wealth to purchase an inn, putting the ex-Marine Chesty in charge. Leah and Pyro remained behind in Rookroost, spending time training their outdoorsy skills, while the rest of the party boarded a boat for Highport. They planned to search for the abandoned temple where Glyrthiel delivered her trained slaves to.

Somewhere along those lines, Mr. Crackers was mysteriously returned to unlife. No one admitted being responsible for that.

In Highport, there was no indication that anything was amiss with the “Princess”. But how would dockworkers and barkeeps know? She had not been seen in public recently, but that was hardly abnormal. Asking about local rumors, the party heard that a forest near Restenford had a band of evil gnomes, and in Restenford itself, a naked elf had been seen riding through town at midnight on a horse with flaming hooves. Asking for more information about Restenford itself, they learned that there was known to be an abandoned (and perhaps haunted?) temple near there. Since Restenford was nearby, accessible by a daily passenger ferry or informally by requisitioning a fishing boat, it might well be the temple in question.

The party hired a passenger ferry to Restenford after briefly discussing how to acquire a fishing boat for the trip, with Amathar providing the voice of reason and preventing a murder, kidnapping, charming, or other interference with an innocent fisherman.

In Restenford they bought a mule and cart. During the transaction, a nearby pile of dung began to move and produce a faint hissing sound. The party investigated. Norsk approached with his sword drawn as he noticed a very large and bright red insect leg protruding from the pile, and Warin cast speak with animals, hoping to communicate. He got an endless, repetitive litany of “EatEggEatEggEatEggEatEgg.” (You can speak with animals, but the animals don’t get any smarter).

So Norsk attacked the pile of dung and the insect within it. He easily killed the creature, which turned out to be some variety of giant beetle, with a single blow. All seemed calm and peaceful until Thic Duc lit a torch, causing a massive explosion. Most of the party were stunned and took minor damage. The remaining beetles fled, and the stablehands extinguished the resulting fires quickly.

After spending the night at an inn (one very far away from the stable with the beetle infestation!), and examining a map of the area, the party set off for the abandoned temple site. Locals told them it was on “Bone Hill”, a journey that would take two and a half days. The first day and night passed without incident, as they camped near to a hilly area with scattered trees and abundant small animal life. Amathar’s Animal Lore skill was sufficient for him to notice signs of larger animals: fur and scratch marks on trees about waist high, prints near the road likely from wolves.

Shortly after the party set out the next morning, they heard a horn blow from ahead of them, and an answering howl from behind. Amathar chose to cast Invisibility at that point, reminding the party he would be around helping out.

Around midday, the party entered an area where the scattered forests existed on both sides of the road. As the entered the wooded area, just around a curve in the road, a fallen tree blocking the road came into view. Sensing something wrong, the party stopped and waited for the ambush. Finally, one of them approached the fallen tree… at which point the tree stood up again. Or, was picked up… by an ogre. Malag, who had taken the lead, held a conversation with the ogre in the creature’s own language. The translation to Common for the rest of the party amounted to: “Give me all your money and goods.” “No.”

Malag and the ogre exchanged blows. At first they seemed evenly matched, each dealing serious wounds to the other. The ogre was dishing out punishment, and Warin had to step up behind Malag to keep him in the fight with healing spells. Then Malag tried a tricky move, and instead lost his sword. The ogre hefted his tree-club, aiming to throw it at both Malag and Warin to knock them both down. He missed.

Malag drew his bastard sword and got back into the fight. The ogre moved in close to pummel, inflicting even more damage with his fists than with the club he had been using… Malag was bruised and bloodied, but managed to kill the ogre with his last strength.

Meanwhile, six gnolls armed with flails had appeared on the side of the road and advanced towards the party. Barron hit them with his Sleep spell, taking five of them out of the fight. Norsk engaged the remaining gnoll, while Thic Duc gave those who had collapsed coup de grace.

Suddenly, with a ringing horn call, three more gnolls appeared from the forest towards the rear of the group. These were armed with slings, and pelted Barron and Thic Duc with sling bullets while gnoll children tried to wake their parents. Thic Duc learned that his reflexes had suddenly become quick enough to knock the missiles out of the air before they hit him… mostly, as he accidentally smacked himself in the face when he misjudged one of the sling bullet’s trajectory. Ouch!

The horn call appeared to have been a signal, as a pack of wolves was charging the party from the rear. Barron begin to engage the wolves with throwing daggers while Norsk and Thic Duc mopped up the melee gnolls and Malag’s duel with the ogre continued.

By the time Malag had finished off the ogre, and Thic Duc and Norsk worked their way through the gnolls, the charging wolves had surrounded Barron and Warin, gnawing and chomping at them both. The outcome remained in doubt until the last of the gnolls fell, and the full might of the party was applied to the wolves. The gnoll children were allowed to flee.

Catching their breath, the party looted the bodies (finding a surprising amount of wealth on the ogre) and considered their next course of action. Warin was out of healing spells and no one was in any shape for further conflict. Based on Malag’s tracking skills, three separate trails led away from the ambush point: one for the ogre, one for the gnolls, and one for the wolves. Would the party follow any of them, or simply continue along the road to their destination?