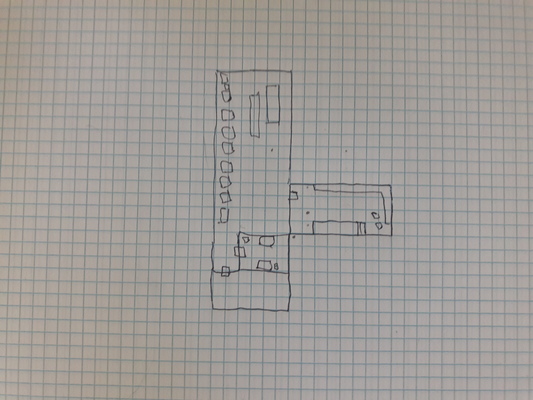 As we left the party, Daphne had just been rescued, and most of the party was still recovering from the wounds suffered at the teeth of the giant weasel. Thic Duc, as the only hale and whole member of the party, drove the Mystery Machine back to Saltmarsh, where the local healer tended wounds and restored vigor.

Since it was getting dark anyway, the party decided to stay the night, putting Daphne (whose purse had been taken, along with most of her clothes) up in a room of her own. The drunken trapper also enjoyed the party’s hospitality for the night.

Asking Daphne about herself lead to some confusing answers. She claims to be from a place called “Earth” (not Oerth), where “scientists” use “technology” (which is something like a wheel, but also something like magic) to create things that work like magic, but Daphne insists they are not magic and that magic is all tricks and fakery. She went to some place called “college” and spent her “weekends” investigating ghosts and haunted houses. Somehow these ghosts and haunted houses never actually killed her or her friends, even though none of them had really noticeable combat skills. She named her friends as Fred, Velma, Shaggy, and Scooby (the wolf?).

She acquired the Mystery Machine cart from a wizard in Rookroost who said it would be “perfect for her” and doesn’t remember how she got to Oerth, if this even is Oerth (she’s skeptical, but admits that if this is a renaissance faire it’s the biggest one she’s ever heard of). She does remember that her squad of amateur investigators went to sleep while investigating a place called “stonehenge” on “Earth”, and woke up on “Oerth”.

The party went to bed to puzzle those mysteries over in their minds, but were woken after a few hours by the faint sounds of footsteps from Daphne’s room. They opened the door, only to find her walking back and forth, back and forth, clutching a table knife from dinner above her head and making stabbing motions. When touched, she woke up, and had no idea what she was doing. She did remember dreaming of something strange… eyes, and a voice, but not what it was saying. The party was disturbed, but not sufficiently disturbed to do anything more than go back to bed and make sure that Daphne was not armed.

In the morning, the party departed from the Saltmarsh taven. As they left town, one of the guards pulled them aside to offer a warning – someone in town, possibly connected to the council, had been asking about which rooms they were staying in, and whether there was an external window to those rooms…

Back at the manor, the party decided to leave a trap for the giant weasel in hopes of guarding their backs while exploring down below. They relied on the drunken trapper’s rope use skills, with some help from Thic Duc to check his work. The trapper kept muttering about how much a weasel pelt from a weasel that size would be worth (“I wouldn’t have to eat fish stew for YEARS!”). The trap was set on the second floor, in the passage leading to the kitchen staircase, near where Daphne’s clothes were found. Daphne gratefully redressed herself in the process.

Thus safe from the giant weasel, the party tossed a torch down the stairs in the scullery. It revealed little more than shadowy lumps on the walls and floor of the room, but there was no movement. The party, with much trepidation, chose to begin their descent into the basement, and promptly fled the house in terror as horrifying, terrible screams of torment rose up from below. Kriselle stood firm, her shining example of courage in the face of adversity shaming the rest of the party into returning after a few minutes to recover.

Because the party had tossed the torch onto the stone floor rather than the wooden staircase, the manor did not burn down in the meantime.

The room below contained a few casks of brandy, wine racks all along the walls, two storage containers filled with junk, the corpse of Daphne’s friend Fred, and 6 rot grubs infesting his corpse. While Daphne screamed in terror and grief, the party defeated the rot grubs (with the help of some last-minute self-surgery by Thic Duc), carefully cataloged Fred’s possessions (noting that his purse had been cut), trying on his armor, and leaving his naked, grub-infested corpse to rot. After going off on odd tangents related to the rot grubs, Kriselle chose not to take the time to fit the armor to her much smaller form. Instead, the party carried Fred’s gear to the Mystery Machine, and left it there. They returned to the basement, where Fred’s maybe-a-week-old corpse continued to rot. Daphne sobbed quietly in the background.

The party searched the room for secret doors, traps, and tracks. They found tracks leading to a blank wall, and eventually (after cleaning up the wall with some of the leftover wine) found the mechanism to open the door. Oddly, as soon as the door opened, Daphne tried to attack one of the party members – but missed, and she didn’t even have a weapon on her hand. Kriselle grabbed her and shook her, shouting her name, and the combination was enough to wake Daphne from whatever state of mind she was in. Nonetheless, the party felt it prudent to return her to the cart and ask the trapper to “watch over her”. They gave him Fred’s dagger to use if necessary (and did not specify what might make it necessary).

Beyond lay a much larger room, and a striking difference from the rest of the house. The area is well lit, with multiple torches mounted on the wall. 10 cots line the south wall, and a table with a mess of plates and silverware (not actual silver). Footlockers at the end of each cot hold clothes and small personal knickknacks. To the left of the entry from the basement of the house are a pair of doors. The first door, to the left again, is unmarked. The other is barred and marked with the word “DANGER” in chalk. Stored against one of the walls is a large bolt of silk cloth and two fresh casks of brandy, along with several opened casks, and a variety of food stores commonly used aboard sailing ships.

Exploring the unmarked door first, the party found a combination office and living quarters, of clearly better quality than the group living outside. Several books, better clothes (including oilskin cloak and boots), a map of the local coastline, and (under a loose flagstone) a small, locked iron box. Two parchments were also located, one with a set of words in the common tongue and what appears to be translations in some other language, and the other with a sequence of cryptic signs and markings.

Returning to the cart with their loot, the party found the cart missing, with blood splatters on the ground nearby and tracks leading back to the road. Daphne, the trapper, the cart with the treasure… all gone.

Dispirited, the party chose to take the remaining treasure (the casks of brandy and bolt of silk cloth) and camp out in the woods. 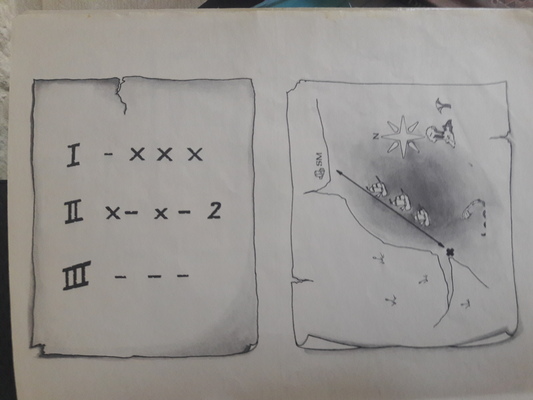