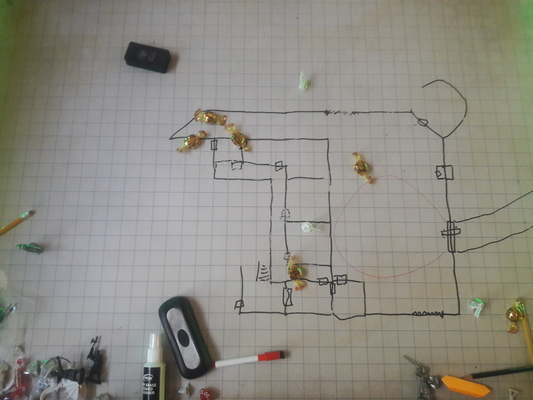 As we left the party, Barron had been traumatized by losing his familiar Alphonso so soon after loosing his zombie pet Mr. Crackers. He returned to Rookroost to rethink his life and try to regain his sanity. At least, that’s what the note said. When they hurried down to the docks to try to stop him, or maybe to make sure he got on the boat, witnesses at the docks reported a diminutive half-elven ranger carrying a hog-tied hobgoblin in a large sack aboard a ship instead. When they returned to the inn, they realized Amathar was nowhere to be found – after scratching their heads about it, they decided he had taken a nap while invisible and there was nothing to be done about it until he woke up. They left a note. All the excitement distracted the party so much they forgot all about Thic Duc, who was meditating in his room when they left the inn to return to the temple at Bone Hill. Hopefully, he’ll find the note when he’s done contemplating his navel. It was Malag’s job to wake him before they left, but Malag was out in the marketplace trying to satisfy a food craving, so Thic Duc would have to catch up later. Luckily, they were joined on their way out of Restenford by Lenny, an auditor with the Adventure Capitalists, who wanted to examine firsthand whether the company’s adventurer’s handbook was being complied with.

Unlike their last trip, the party made it to the base of Bone Hill without significant incident. They were briefly interrupted by giant centipedes getting into their food rations overnight, but the party quickly dispatched them. Lenny took notes on the incident and demonstrated proper packing of food stores for the party.

Arriving at the base of Bone Hill without further incident, the party set up scarecrows at their old camp as decoys, and chose a new location further away from the undead temple. The night passed without incident, though moving lights were seen from the top of the hill occasionally. Something alive was using the space.

In the morning, the party approached the ruined temple. It became obvious that the temple was more properly termed a small castle. It had a dry moat, a gate (now permanently open, with a rotting battering ram still in place), and a large circular tower. Inside, it became obvious the place also had holes in several of the other walls. Getting in would not be a problem.

Norsk chose to climb the wall instead, just in case. He climbed down the other side while the rest of the group walked through the front gate, carrying a bronze horn that he found on the top of the small guard tower.

The courtyard revealed a door to the circular tower, another door in the far wall, and an large open area where a Fireball has once gone off. The whole place was filled with corpses, mostly skeletons, some with scraps of flesh remaining. The party chose to open the door to the circular tower first, finding a pile of skeletons and zombies inside. Both rose to attack the group. Malag blocked the door so they could only attack one by one, while Norsk moved to guard the party’s back from a potential flanking action. In a classic case of prophecy fulfilled, his motion startled a young bugbear hiding near the breech in the walls Norsk was guarding, and his scream of terror at Norsk’s approach drew the attention of some of the zombies unable to attack the living in the tower due to their sheer numbers.

Luckily, Warin was there to make the skeletons dance Thriller on the zombies.

With the tower sorted out, the party moved on without bothering to try the stairs leading to the upper levels. The stairs were in pretty bad shape, but still intact. Instead, Warin used a field-expedient trap detection and removal process by having one of his skeletons run laps around the courtyard. Somewhere on a distance plane of existence, an elder diety sighed in exasperation. But this distracted most of the party from noticing Malag was gobbling zombie brains like free dip at a chip party.

Moving on from the skeletal calisthenics, the party entered the main building of the keep. The first few rooms were empty, but there were signs of habitation by furred creatures. Presumably more bugbears. The incident which shall never be spoken of again was spoken of.

The party then entered a long corridor with a series of doors to either side, in a vague S-shape. Warin, trailing a horde of zombies, took the lead. He was gradually getting the hang of communicating with mindless undead through trial and error. He stopped at the first door off to the right and tried to open it, but it was stuck. No dice. Just as he opened the second door, Norsk heard a commotion from behind the first – it sounded like people frantically grabbing weapons and armor!

Both doors opened almost simultaneously. The first held a squad of bugbears and their wives. They were crammed into the room so tightly that only one bugbear could face the party at a time, and vice versa, although the group of females throw whatever junk they could find into the melee as well. Malag drew the bugbear straw and the fight began.

At the other door, Warin and the bugbear shaman had a magical duel of sorts. Warin lost, and fled in fear down the unexplored corridor. The shaman reached for the nearest hammer, ordered his female to stay behind him and the party, and then cast Spiritual Hammer. Unfortunately for him, the hammer he had grabbed was a medical reflex test hammer instead of his warhammer; that’ll teach him to mix pediatric health care with warfare.

While Norsk tried to figure out how to get to the shaman, Malag lost his sword in the door to the room and went in with both fists, killing the first bugbear. He stepped back to take up an ambush position just outside, hoping to lure the next one out where the party could double-team the creature. Voices from inside the room indicated the bugbears had caught on to this strategy and were discussing their own options. They decided to use one of their beds as a shield to face the party one at a time. Unfortunately for them, Lenny was fluent in bugbear, and told Malag what they were planning in orcish. Malag caught the bed as they came out and shoved it viciously back into the room, crushing one of the poor female bugbears against the back wall.

Meanwhile, Norsk was getting Reflex Hammered to death by inches. He dug around in his pack for a flask of oil, tossing it into the shaman’s room, and followed it up with a torch, lighting the room on fire.

Meanwhile, Warin had fled all the way to the dining hall at the far end of the corridor under the influence of the Shaman’s fear spell. When he came back to his senses, there was a bugbear in the room with him, and the two fought. Warin was learning that collecting armies of skeletal undead can be as much a disadvantage as an advantage in tight quarters.

With the shaman’s room burning, Norsk quickly dispatched his female and rushed in with Lenny to engage the shaman. Norsk missed his first swing, but Lenny backstabbed the shaman, prompting the bugbear to whirl around and charge, tackling the insurance auditor to the ground and knocking him unconscious. Luckily Norsk was there to impale the holy bugbear on his sword, pinning him to the ground and finishing the creature off despite a last-minute attempt at a healing spell.

Lenny was bandaged up and Warin returned in time to help with the healing. The party chose to spend some time resting in the bugbear’s unburnt room.

To be continued… Treasure