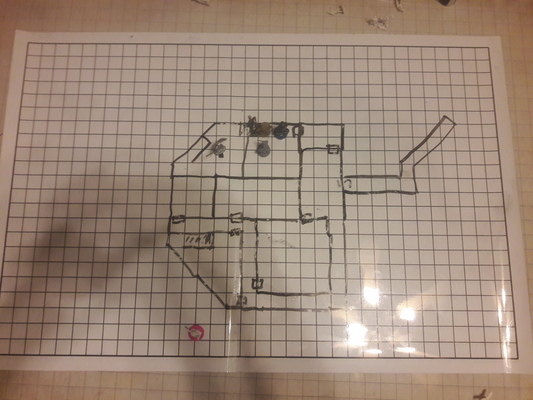 As we left the party, they had just defeated a human wizard and his bugbear shaman ally, then kidnapped a baby bugbear after slaughtering his playmates and eating their brains. They searched the wizard’s laboratory, which caught Amathar’s attention enough that he came out of hiding, though he stayed invisible. Apparently he had been invisibly observing the party the whole time for research purposes. This enabled the party to determine which of the various flasks and vials were actually magical (8 of them) and prompted Malag to trade cloaks with Amathar.

Additional searching located a trapdoor to an astronomical observation tower, containing a crude telescope and other instruments. Some of them were heavily charred as if they had been in a fire. Odd, though the senior members of the Band of Misfits showed a notable lack of curiousity about it.

After carefully considering the matter, the party spent the night in the tower, having secured the trapdoor leading below. Around midnight they began to see strange forms moving about the keep. The forms appeared to be re-enacting the siege that had left the keep in its current, damaged state. The party chose not to interfere, although Thic Duc took the opportunity to fail ak out of the tower to get a closer look. Bugbear babies on leashes are not stealthy. His strange vision revealed some kind of mystical light source from directly below them and from below the tower. He did not observe anything else of significant note, though, and so informed the rest of the party – loudly.

The party did notice something removing the bodies of the dead bugbears below them. They decided that cleanliness was the better part of valor and refrained from interfering.

When dawn rose, they went below and followed the blood trail from the dragged bodies, uncovering a secret door in the barracks they had previously missed. Below was a chamber occupied by ghouls, who attacked Malag as he came down the stairs. He slew one but the others paralyzed him before the party could kill them. Amathar took Malag back to the tower until he recovered. (Both Jeff and Chris had to leave early)

The rest of the party continued on. They found a pile of dead bugbears – the ones they had killed earlier. A ghast was eating the bodies when they arrived, and attacked Norsk as he investigated. Norsk was paralyzed, but the ghast was swiftly killed. The party made various bad jokes for a few minutes until Norsk recovered from paralysis and continued.

The rest of the rooms in the underground complex had little of interest, but clearly the basement was smaller than the building above it. Searching for secret doors revealed two in the room that had once held the ghast. Warin noticed both of them, and quickly opened the first one by pressing a stone in the wall. Even as the door swung open, he had moved on to the second door, pointing it out to the party. He was interrupted by a row of zombies attacking from the other side of the first door. As the party moved to engage, he invoked the power of his diety, calling upon that unholy power to make the zombies sway in unison to his will. Shortly after that, every zombie in the room was kung fu fighting, but there were more coming from beyond the door. With Amathar and Malag absent, Norsk and Lenny were having trouble holding their own against the zombies.

That’s when a spectral figure passed through the door behind Warin without bothering to open it. “You fools!” it screeched in a voice from beyond the grave. “You will die for disturbing my work!” The insubstantial hand gripped Warin’s throat, sending a deathly chill through his body. Warin felt his connection to his diety being shaken, his power drained from him, his faith stricken through with doubts.

Desperately, the cleric gathered the fragments of his faith and held forth his holy symbol once more. “You must be lonely! Be my friend!” he commanded the creature from beyond the grave, who laughed and replied, “Your puny deity has no power over me. Your faith is weak!” Taking stock of his own doubts and questions, Warin knew the creature was right. His faith was weak. Or perhaps it was not his faith that was the problem. Perhaps… perhaps might did not make right? Perhaps seeking power to do good was the wrong path? Perhaps the reason for the season was to do good for goodness' sake?

Despite his crisis of faith, Warin stood his ground. His courage would have to make up for the quivering jelly of his soul in crisis, and make up for that it did! His hammer passed through the creature harmlessly, but he would not falter. Warin would not budge an inch! He would face this creature alone if he had to rather than let it get to his friends! The creature swung at him again and again, but Warin ducked and dodged it’s fell touch. (“You can’t touch this!")

With the zombies mostly attacking each other rather than the party, and Norsk blocking reinforcements temporarily, Thic Duc and Lenny tried to figure out what to do about the wraith. Warin’s zombies were blocking them from reaching it… or perhaps blocking it from reaching them. Lenny had been knocked down early in the fight and was still prone, playing dead, but with the zombies nearby now attacking each other, he had options. He pulled out the scroll of Spiritual Hammer and began to read, speaking the somatic components of the spell aloud: “It’s hammer time!”. Thic Duc got a two-for-one zombie skewer discount, thrusting his spear through two zombies at once. He considered attacking the wraith with his martial arts skills, but then remembered what had just happened to Warin, and decided that was a bad idea. Instead he worked to free his spear.

Meanwhile, Warin ordered the zombies the attack the wraith, hoping to keep it contained without being within reach of its deadly, chilling touch. Backing away allowed Lenny to see the creature clearly as he finished his reading from the scroll, and a mystical field of force appeared. Lenny sent it hurtling at the wraith, and the glowing magical hammer struck the creature with real effect for the first time. It screeched in pain instead of madness, and fixed it’s eyes on Lenny, who was still lying prone and directing the hammer. Demonstrating mysterious telepathic abilities, it hissed “I’m coming for you, Lenny!” and moved through the zombies attacking it towards Lenny. Oops.

Unfortunately that put the creature within range of Thic Duc’s now-freed spear, and the monk stabbed it viciously. The insubstantial form wavered, but remained focused on Lenny. “I’ll eat your soul first, and then your little monk too!”

But alas, those sweet promises would not be fulfilled, as Lenny’s hammer struck once more and the wraith dissipated. Was it truly dead? Perhaps… at least for the moment, it was no longer a threat.

The party mopped up the remaining zombies and continued to explore. Based on layout, the passage with the zombies came from the tower, so they chose to focus on exploring the other secret door from which the wraith had emerged. Beyond that door they found a small office with a desk and bookshelves, plus a door leading to bedroom. Strange finger marks under the bed suggested some creature was in the habit of lurking there. Perhaps sleeping on a bed was difficult for a ghostly creature of darkness without true physical form? Both rooms were supernaturally chilled, though the party lit a brazier in the office in the hopes that it would warm up a little.

Warin’s research into the nature of the undead paid off as he realized the room’s chill was likely due to a connection to the Negative Energy Plane, from which undead draw their power. If the room was still cold, perhaps the creature was not truly dead, or its source of power was still active.

Undaunted, though, the party continued onwards. The bedroom contained another hidden door, this one leading to a library with a strange statue in the middle of the room, holding a hammer. Warin stepped forward into the room, and the statue suddenly came to life, throwing it’s hammer at him. He was knocked unconscious by the blow and the party dragged him back out.

After some discussion, and tossing various objects into the room without response, Thic Duc tied a rope around his waist and tried to leap over the floor on the entry area. He succeeded, landing well into the room, but the statue’s hammer was already on its way. Knowing what to expect, however, his training kicked in, and his hand moved in a trained motion to deflect the missile – and passed through the hammer without result! Struck, Thic Duc was also knocked unconscious and the party dragged him back out of the room and revived him.

Stumped for the moment, the party considered what to do.