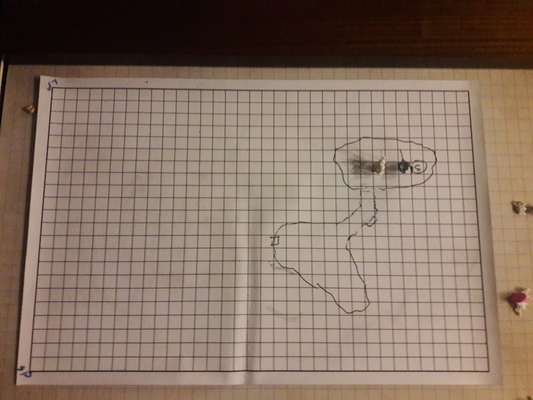 As we left the party, they were trying to figure out what to do about a statue throwing hammers. We leave them to their fate, and the camera focus shifts to a tavern in nearby Restenford, where a young paladin and his gnomish tutor are enjoying a well-deserved meal together. Two half-elves sit nearby waiting for their own food, one of them talking quietly to his emotional support goat, when a women bursts in and screams that a giant rat has stolen her child. All of the competent adventurers in the tavern, meaning just those four, leap to their feet and run outside to resolve the issue. How eager for adventure they are!

The woman leads the impromptu party of rescuers to the last place she saw the giant rat, a burned wreck of a building that was an old guardhouse before the fire. Now, it has been damaged, with holes in the walls and overgrown brush surrounding it. With Tiberium in the lead, they made quick work of searching the inside. They found no missing baby, but they did find tracks, and a trapdoor leading downwards. The trapdoor did not have tracks nearby, however.

The group searched around the outside of the building, locating two ratholes. One was large, sufficient for humans if they crawled, the other would be a tight fit even for a gnome. Both holes lead towards the burned building, so the party decided the trapdoor probably led to an underground complex where the rats had a nest. They returned to the trapdoor and opened it.

They lit a torch and dropped into the room below, where they were immediately attacked by a ghoul and a pair of zombies. After the first blows were exchanged, Pyrzival succombed to the ghoul’s paralysis and Elmond revealed his holy symbol and drove the undead into flight. The party briefly pursued, but the undead fleeing undead met with reinforcements who were not affected by Elmond’s prior invocation of his diety. They arranged in a defensive posture while Pyrzival recovered from his time as a garden gnome. The undead advanced briefly, keeping the door in sight, but retreated back out of sight when the party fired arrows in their direction. When Pyrzival recovered, they advanced again with Tiberium in the lead. Followed by the zombies and skeletons, the ghoul came to meet him, and the rest of the party was trapped in the corridor behind Tiberium and unable to help. Though Tiberium struck several forceful blows, he eventually succombed to the ghoul’s paralysis, as did Pyrzival once again. The ghoul seized Tiberium’s ankles and began to drag him away from the party, so they were no longer blocking the passage.

Pipko rushed forward to help, but he was blocked by the zombies and skeletons. The sound of ghoulish teeth ripping into Tiberium’s helpless flesh filled the small cavern. After an exchange of blows, Pipko had put one of the zombies out of its misery, and Elmond had wounded the other but taken wounds himself. Hoping he was close enough to affect the ghoul, Elmond stuck his holy symbol in the face of the zombie he was fighting and cried out “Begone, foul creature of darkness!” even as the creature’s teeth sank into his ribs, finding a weak spot in his armor. Elmond fell, bleeding profusely, but the undead turned at bay and fled.

In the darkness, Tiberium was still conscious, barely, but paralyzed and bleeding. He turned over in his mind the actions that had gotten him to this place. Paladins were supposed to be proof against evil! He had been keeping his divine protection closely held, thinking of it almost as another suit of armor that would offer physical protection, but the ghouls had been able to touch him regardless. Yet that protection still flowed from above, and his faith was strong. What had he done wrong? Perhaps he should not seek to hide behind the divine glory, but instead share it with his friends..

The skeletons had fled to the far end of the room, unable to flee any further from Elmond’s divine aura. Pipko rushed forward and bound Elmond’s wounds, and Elmond followed up with an invocation to his diety for healing while Pipko continued forward to press the skeletons. Tiberium finally shook off the paralysis, briefly stopped to heal Elmond as well, and joined Pipko fighting the skeletons. Tiberium was just in time to finish them off as Pipko fell, and his new-found faith radiated outwards against the threat of the undead, offering divine protection and solace to all. It was not proof against the physical threat of evil, perhaps, but it was proof against the apathy of hopelessness, and the undead flinched from the radiance as if blinded.

With the immediate threat dispatched, the party briefly investigated the chest Elmond had tripped over. When the chest was lifted up to carry, something inside broke or shifted with the sound of glass – and the chest turned to a strange mist that refused to dissipate. With Elmond’s spells depleted, and many wounds needing to be tended, the party stopped here for an hour to rest and gather their strength.