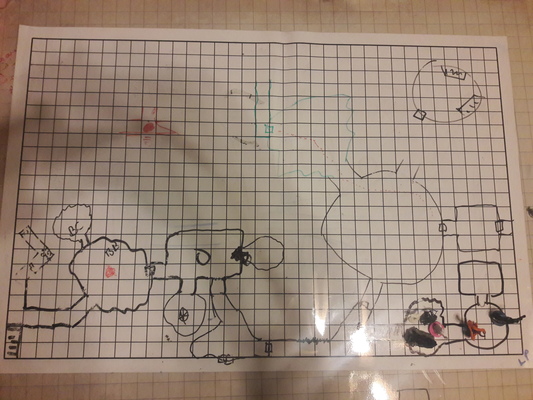 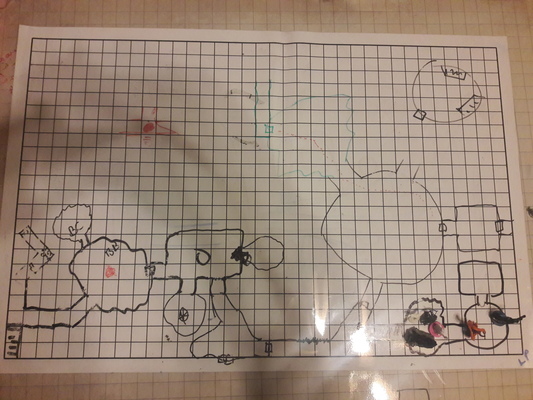 As we left the party, they were examining the locked door at the end of the corridor and considering their next move. Leah and Amathar, on the other hand, were in Restenford; Amathar was doing the things that wizards do and Leah was drinking herself silly to forget about Barron. Once Leah had recovered sufficiently to purchase 5 more healing potions, they set out together to rejoin their friends. After a few hours travel, the pair saw a trail of smoke rising into the sky from between the four hills surrounding their destination, and hurried to rejoin their friends.

Meanwhile, Otto (a halfling notorious for his sense of humor) had been dressed in swaddling clothes and laid to bed within a crib by his friends, intent on bursting forth at the most inopportune moment during a bachlorette party. Alas, the best laid plans of mice and half-men gang aft aglay, as they say, and Otto (perhaps more than a little drunk already) fell asleep while he was hidden away. When he woke, his crib was intact, but the smell was closer to a manger. Otto set about exploring the room with the aid of his blanket, discovering that it was a small cell meant probably for holding prisoners. Or so he guessed, based on the lack of an interior door handle. Kicking the door didn’t help, but he did eventually hear voices outside. They were not helpful and mostly told him to shut up, while discussing who had been stupid enough to kidnap a fake baby.

Meanwhile, inside the wererat lair, Leah and Amathar rejoined their friends, who were in the process of breaking down a door that had been barred from the other side. They completed that business swiftly as their friends crossed the pit, and followed a short corridor into what might have been a dining room, with tables made from treestumps and a slightly raised area where a single large wererat crouched in the dim light. Pyrcival offered the creature a way out: “Surrender the holy symbnol of your former master, and you may live.” The offer was refused.

As Tiberium and Pyrcival advanced to melee with the wererat, four more fell from a hidden perch above and attacked those of the party bringing up the rear. Despite the surprise, the party was able to prevail, even when the lead rat summoned a swarm of his smaller brethren – thanks to Amathar’s well placed sleep spell.

The wererats had hidden their treasure horde behind yet another secret door. It consisted of a horde of coins – thousands of copper, but with coins of greater worth mixed in. Buried among the coins were other treasures: a set of potions, a set of scrolls, a number of small gemstones, and a magical short sword, shield, and boots.

Also, in a small room behind the raised area, the group found a naked halfling. Without batting an eye, they accepted him into their ranks.

After looting the wererat lair, the party returned to the surface with the captured holy symbol – torn from the neck of the wererat leader, tarnished almost beyond recognition – and the treasure, and the new halfling as well. The next step was to return to Bone Hill, redeem the old master of the keep, and destroy the wraiths that were beyond redemption in this life.

Two days journey to the west brought them back to the keep, and the hidden door they had missed but Amathar had not. Bypassing that door for now, they returned to the small room with the friendly animated skeleton prisoner. Warin handed over the captured holy symbol, Tiberium knelt in prayer soon followed by Warin, and their combined efforts began to restore the polish and shine under the skeleton’s spectral fingers while the rest of the party discussed the strategy for handling the wraiths. Meanwhile, however, Warin and Tiberium’s prayers were interrupted by a holy vision: a divine presence thanked them for their labors on behalf of the fallen keep and asked if they might wish for a boon as reward. After consulting, they requested aid in their future labors, and were told to return to the statue where Tiberium had located his helmet and take what was there for them. They did so, finding a mace with a holy symbol etched into each face.

As the party opened the door, Tiberium leading and Warin close behind, a chill wind blew through the group and extinguished their lanterns and torches. With a few whispered words, Tiberium beseached Purity to light the way, and the sword begin to glow dimly. Beyond the secret door was a staircase leading down into darkness. The party descended, feeling the chill surrounding them. Warin and Tiberium conferred in whispers, suggesting perhaps the chill indicated a connection to the negative energy plane. Undead were likely…

And indeed, at the bottom of the stairs a room opened up wider, and in Purity’s faint light, a vague and indistinct shape formed. Followed by another one either side. The wraith they had encountered before had brought friends. Undaunted, Tiberium strode forward, focusing his intent on protecting his friends and forcing the wraiths back. Warin strode forward, remaining within Tiberium’s circle of protection, and begin to strike at the central wraith. His mace sizzled and popped and cracked with each strike, forcing the undead creature to waver and cringe in pain as the blows landed. Pyrcival followed close behind as the pair advanced into the room, Tiberium’s barrier forcing them back.. until the room opened up widely enough for both of the flanking creatures to flow around Tiberium’s protection and into the solid stone walls!

While Warin stood his ground against the central wraith, Tiberium retreated, trying to keep the rest of the party within his protective aura. Yet with the wraiths on the other side, he could only push them further away and towards his friends at the same time. Barron and Amathar unleashed magical daggers and magic missiles to no avail, wounding the creatures but failing to destroy them or drive them back. Leah stepped up with a silver-tipped arrow, but it passed through the creature without harm – and she suddenly realized none of her weapons were enchanted! The wraith’s chill grasp was unavoidable, and for a moment the half-elven ranger swooned as her life force was drained.

The wraith cackled in glee, shrugging off another magic missile from Amathar while Barron and Pyrcival fought the other. It pointed its grasping hands at Pyro, and a faint spectral voice intoned, “I got you, and I’ll get your little dog too!” Pyro growled, and Leah stepped in front of him protectively.

In the chamber below, Warin struck again and again with his new mace, visibly wounding the creature again and again. Finally, staggered by one of Warin’s blows, Pyrcival was able to finish it off. With Tiberium still focused on his barrier, the two friends went to aid those who were still at the top of the stairs. With their leader re-slain, the two smaller wraiths were quickly dispatched.

Beyond the staircase, the chambers held little more of interest… save another treasure trove, coins and a small collection of magical items, including a ring and a battleaxe.